Lesotho on Africa Map illustrates the surrounding countries, 10 district boundaries with their capitals, and the national capital. 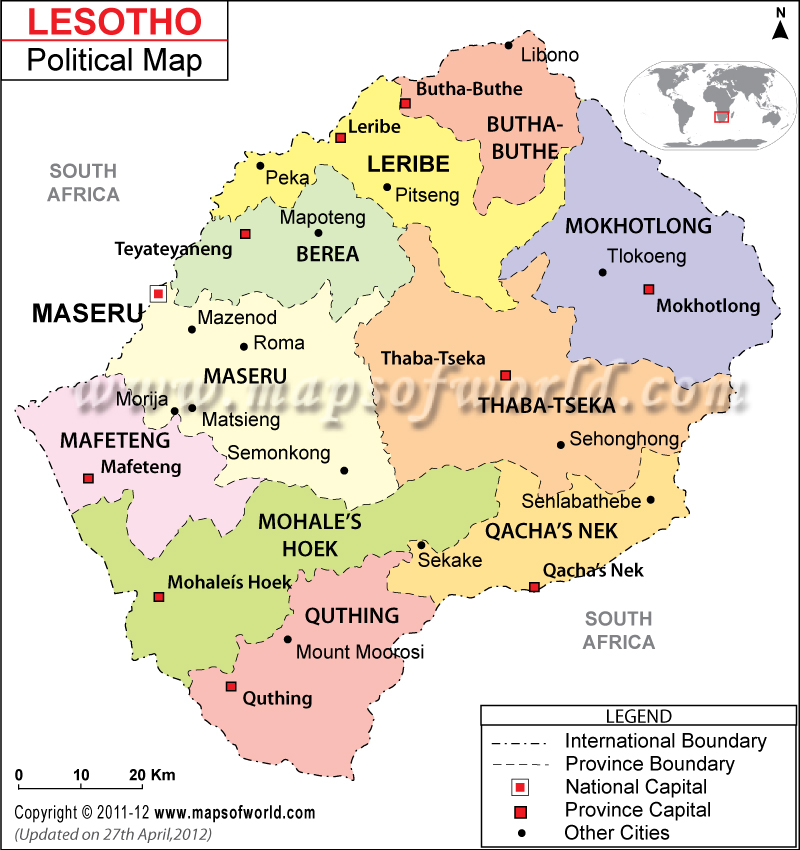 Lesotho’s political map showcases important cities, provinces with their capitals for the convenience of the web surfers. Lesotho covers an area of 30,355 square kilometers. Maseru is the capital of Lesotho. The city is marked with a red dot within a square in the political map of Lesotho and is situated at an elevation point of 1673 meters above sea level. The white squares denote the province capitals.

Lesotho political map helps the web surfers to calculate the approximate distances of the provincial boundaries of the country. The Lesotho map features important cities and provinces with their capitals for the convenience of web surfers.

Geographical Coordinates
The country is located in southern Africa. The latitudinal and longitudinal extent of the country is 29°30′ South and 28°30′ East respectively. The country is landlocked as shown in the online map of Lesotho, covering an area of 30, 355 square kilometers. Thabana Ntlenyana is the highest point of the country situated at a height of 3,482 meters while the lowest point is at the confluence of the Makhaleng and Orange rivers.

Maseru is the capital of Lesotho. The longitudinal and latitudinal extent of the city is 27° 28′ 60” East and 29° 19′ South respectively. The city is marked with a red dot within a square in the political map of Lesotho and is situated at an elevation point of 1673 meters above sea level. Three airports located near the city serve as gateways to Maseru. They are:

The black dots on the online political map of Lesotho represent important cities of Lesotho. Some of the cities are listed below: