The flag of Lesotho came into effect on October 4, 2006. The date marked the celebration of 40 years of independence. 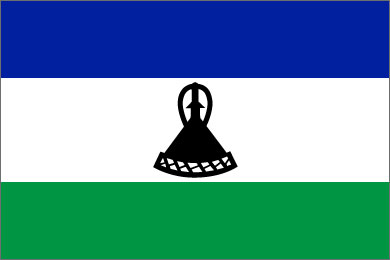 The flag of Lesotho came into effect on October 4, 2006. The date marked the celebration of 40 years of independence.

Four designs were proposed for the new flag, and the present one was selected. The original design included a brown Basotho hat but was changed to a black one to represent the Black identity of the country.
Design

The Lesotho flag combines elegance and rich symbolism, as explained above. The background of the flag is a combination of three horizontal colored stripes: Blue, White, and Green – in that order, from top to bottom. In the center of the white stripe is shown a black mokorotlo, which is a type of Basotho hat. The flag follows a proportion of 2:3.

Lesotho adopted its first flag in 1966, which was when it got independence from the United Kingdom. There were three vertical stripes of Green, Red, and Blue, with the last one taking up the most area. A white mokorotlo is also featured on the flag.

In 1987, the Basotho National Party was toppled from power by a military coup, which was when a new design of the flag was introduced. This flag was in use until 2006.