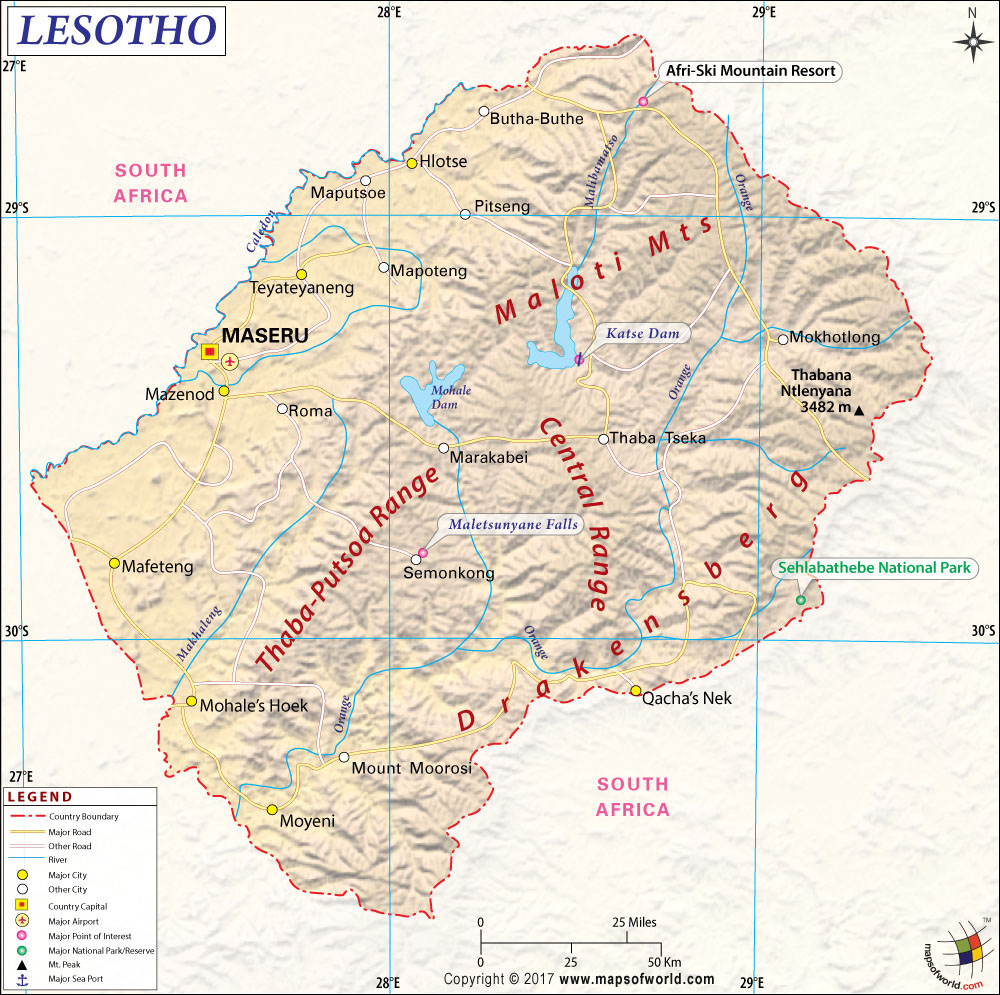 Explore this Lesotho map to learn everything you want to know about this country. Learn about Lesotho location on the world map, official symbol, flag, geography, climate, postal/area/zip codes, time zones, etc. Check out Lesotho history, significant states, provinces/districts, & cities, most popular travel destinations and attractions, the capital city’s location, facts and trivia, and many more.

People of Lesotho are known by their name Sotho. Centuries ago they used to live in South Africa and gradually moved to the land of Lesotho where they intermingled with the Khoisanpeople.

The county was formerly known as Basutoland. The total population of the country is about 2,022,331 and is surrounded by South Africa.

The country comprises of distinct diverse landscape regions. There are high plateaus, low hills and mountains. Among the mountains the tallest in altitude in Lesotho is the Thabana Ntlenyana . It rises to an altitude of almost 3,482 m above the sea-level. In the low-lying regions, the lowest point is found in the confluence of the Orange River and the Makhaleng River ; which is almost low lying nearly about 1,400 m. Lesotho is surrounded by major two states namely San Marino and Vatican City, in Italy.

Lesotho is situated in the southern part of the African continent.

It is landlocked and entirely surrounded by South Africa. It is surrounded by the Natal near the South African province, by Cape Province in southern part, and by the Orange Free State in the north and west region.

The flag of Lesotho is quite beautiful and carry a relative significance. There are total four colors in the flag. These are blue , white , green and black . The flag contains three stripes, of which the upper stripe is blue, the middle is white and the bottom stripe is green. In the midst of the white stripe there is a black Basotho Hat . It represents the native people of the country. In the flag the colors have their individual meanings and symbols. Blue signifies rain; white signifies peace and green signifies prosperity.

In the region of Lesotho winter is usually dry while the summers are hot and wet . The best time to visit this country is between October to March . At this time the weather remains very pleasant. The warmth of the climate attracts the tourists. In these months there is least amount of rainfall. You will get plenty of sunlight during the summer months. Most of the African countries are known for their hot and sultry climatic condition. But Lesotho differs in this matter. In summer the weather is warm but not terribly hot. In winter the temperature remains cool and often drops to below zero degree Celsius.

Flora And Fauna Of Lesotho :

Flora : The natural habitat of Lesotho is rich enough. In other words the nature’s bounty reign the land of Lesotho. Among the various types of plans, the alpine flora is the most exciting ones. When talking about flora, Spiral Aloe or Aloe Polyphylla must be mentioned. The varieties include both the left and right handed spirals. In the slants of Maluti the Spiral Aloes are mostly found. Cape Alpine flowers are also found in those areas. In this context mention should be made of Drakensberg -Maluti Alpine Park that protects the rare species of plants.

Fauna: In a country like Lesotho, which is highly mountainous, specialized species of fauna are found. Since these are rare, these become more interesting to the visitors. The entire mountain ranges are ruled by Rhebokand Mountain Reedbuck. Eland can be sighted at Drakensbergthat give you a breath taking experience. Among the other exciting animals there are mongooses, meerkats, and rock hyraxes. Baboons and jackals are also found in Lesotho.

In Lesotho you will find various castes, tribes and races. Sotho covers the major portions of the inhabitants. It covers about 99.7% of the total population. Europeans , Asians , and others are also to be found in Lesotho. The natives of this country are also known as Sotho. However this mixture of ethnicities also influences the culture of the country and has resulted in a positive impact on it.

Christianity is the main religion that rules in Lesotho. Some other native beliefs are also there. To talk about the languages, Sotho , Southern , English , Zulu and Xhosa are mostly spoken.

Arts, Culture And Music Of Lesotho

Art : Lesotho is popular for its Mohair Weaving Tradition . Among the other flourishing cottage industries in Lesotho there are Grass Products , Pottery , Beadwork , Molamus , Clothing , Basotho Toys , Litema and so on. Some famous authors from the country of Lesotho are Moroesi Akhionbare , Thomas Mofolo , Mpho Matsepo Nthunya , Mzamane Nhlapo , Halejoetse Tsehlana and so on.

Culture : Among the traditional festivals The Morija Arts & Cultural Festival is quite popular. It is primarily a music festival. This festival generally takes place in the town called Morija . Traditional dresses of Lesotho include the Basotho hat that is also known as “mokorotlo” and the Basotho blanket .

Music : Some of the traditional musical instruments are lekolulo , setolo-tolo , thomo and some others. Lekolulo is a sort of flute that generally the herding boys use. Setolo-tolo is another kind of musical instrument that is played using the mouth.

Then thomo is a stringed instrument especially for the women. Except these you will also find some other musical forms in Lesotho such as sub-Saharan AfroPop styles , kwaito , jazz , reggae etc.

Diamonds, wool, mohair, sand, clay, footwear, clothing, building stone etc are the natural resources of the country. All these resources bring in lots of revenue for the country. The country earns its revenue mainly from exporting electricity and a little portion of it derives from exporting water. Most of the families survive on the revenues from agriculture. Cattle rearing are also a source of earning for a number of people. From various sources, Lesotho has got economic aids. Some of these sources are United States, Ireland, World Bank, United Kingdom, Germany etc. by the help of African Growth and Opportunity Act (AGOA) ; Lesotho has gradually become the largest exporter in the fields of garments to the United States from the regions of sub-Saharan Africa. This is really a great achievement for the country.

Lesotho national anthem was officially adopted in the year 1967, by a royal decree. The words of the National Anthem of Lesotho reflect the pride, which people take on their country. The original melody was derived from a Swiss songbook, in 1823. The lyrics of the song were penned down by Francois Coillard, a French missionary. The music composer of Lesotho national anthem was Ferdinand Samuel Laur.

Though the melody was originally derived from a Swiss songbook, it had some traits of Eastern folk. The song was later Africanized after being officially accepted as the national anthem of Lesotho. Initially, the title given to the national anthem of Lesotho was “Freiheit”, which meant freedom. The song was first published in a collection of Lesothan songs for the high school students in 1869. Since the lyricist Francois Coillard spent his childhood days in the French-Swiss border, he was greatly influenced by the melody of Laur’s songs.

In total there were five verses in the original anthem. Some of the middle verses were left out in the 20th century version as these verses meant abolition of the traditional customs and beliefs. These verses were thought to be inappropriate for a national Anthem. Lesotho national anthem refers to the homeland as the land of their forefather and the most beautiful in the whole world. It is an ode to the country, and their forefathers.

The translated English lyrics of Lesotho national anthem are as follows:

Lesotho, land of our Fathers,
You are the most beautiful country of all.
You give us birth,
In you we are reared
And you are dear to us.
Lord, we ask You to protect Lesotho.
Keep us free from conflict and tribulation
Oh, land of mine,
Land of our Fathers,
May you have peace.

Lesotho banks serve as the financial institutions of the country. These are involved in a wide range of banking operations. The Central Bank of Lesotho, owned by the government of Lesotho, is the apex bank of the country. All other banks in Lesotho work under its jurisdiction.

The various functions of the banks of Lesotho are:

The banks of Lesotho also provide financial assistance, advice and support to non-governmental and cultural organizations and various economic sectors of the country.

Some other banks of Lesotho include: