About Accra, The Capital of Ghana: Stretching along the Ghanaian Atlantic Coast and extending North into Ghana’s interior, Accra is the capital city of Ghana. As of 2012, it has an… 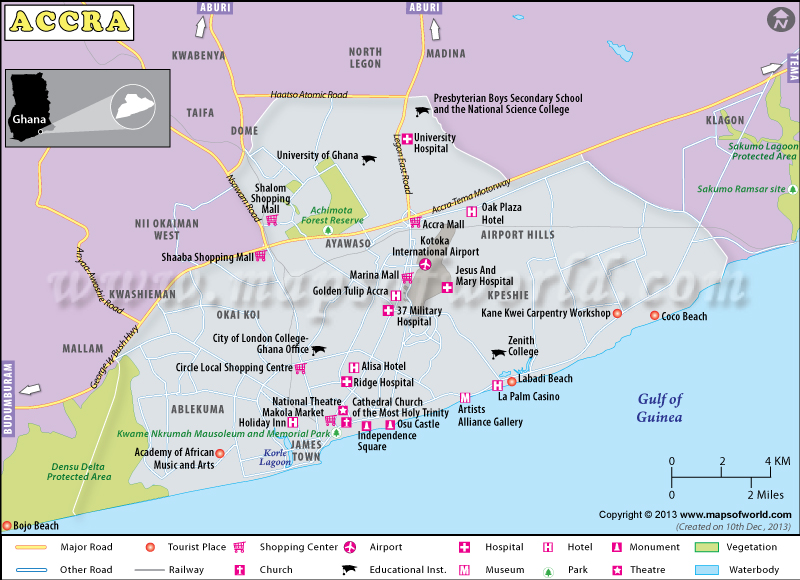 About Accra, The Capital of Ghana:

Stretching along the Ghanaian Atlantic Coast and extending North into Ghana’s interior, Accra is the capital city of Ghana. As of 2012, it has an estimated population of over 4 billion, making it the eleventh largest metropolitan in Africa. The city has buildings varying from 19th century Victorian architecture to modern day skyscrapers and apartment blocks. Although the official language is English, Ga, Twi, Hansa and Ewe are widely spoken by the local people.

Accra served as the capital of the British Gold Coast from 1877 to 1957 and was originally built around a port. It boasts of both economic activities like manufacture of lumber, textiles as well as recreational activities like nightclubs.

Accra can be roughly divided into 4 neighbourhoods – Central Accra, North Accra, East Accra and West Accra. The city is bordered by the Great Hall of the University of Ghana at the north and by the Gulf of Guinea at the south. While the Nautical College forms the eastern border, the intersection of the Lafa stream and Mallam junction serves as the western border of this city of over 200 square kilometers.

Centered around British, Danish and Dutch forts, Central Accra is separated from the rest of the city by The Ring Road, which forms a ring around it. Although the whole city is well established, Central Accra remains the cultural as well as administrative centre and includes many principal attractions of the city including the National Museum and the Ohene Djan Stadium.

Many international airline companies including Emirates, Delta Airlines connect North America, Europe, Middle East and Africa to the Kotoka International Airport. The airport is used for both civil and military purposes.

The travelling gets easier once you reach Accra. There are numerous types of public transport to choose from, ranging from pre booked SUVs, the Metro Monorail, regular taxis and tro tros (minivans) to buses. One can even roam around the city safely on foot. The tro tros are the cheapest and most knowledgeable mode of travel but are very crowded. Ironically, the taxis that keep honking at foreigners are not only grossly ignorant of the city’s roadmap but also do not run on meters.

Although, being close to the equator, Accra has a hot and humid weather all throughout the year, the ideal time to visit would be from November to April when the climate is relatively dry and there is a considerable drop in the amount of bugs around.

Accra celebrates a number of festivals every year. The people of Prampram of the Greater Accra Region celebrate the Lalue Kpledo Festival in March. From the last week of July to the first week of August, the people of Ada celebrate the annual warrior festival, Asafotu-Fiam festival which commemorates war heroes, dead and alive and is celebrated by staging mock battles. Even the harvest cycle is marked by this festival.

Another harvest festival of Accra is celebrated by the Ga people, the Homowa festival, also in August. This festival originated because of a famine and is a festival of merry making. Although, it is predominantly a Ga festival, other ethnic groups are welcome to join in.

Accra is a blend of modern, traditional and cultural straits. The city has everything ranging from malls to museums to parks to five-star hotels and nightclubs, even beaches. Here as Makola and Kaneshie markets offer humble and traditional items, namely fabrics, household and food items, places like the Accra Mall and Palace Shopping mall have a more modern collection.

Among the must visit places of the city are the National Museum, the Labadi Beach, the Ghana Central Library, Kwame Nkrumah National Park, and the University of Ghana. The Jamestown area is the city’s most historical site, filled with 17th century Danish architecture.

For the taste of Accra nightlife, Osu is the place to be. From trendy nightclubs to fancy restaurants, cocktail bar, pastry shops, Osu has it all. Oxford Street has the biggest entertainment hub of Osu, encompassing eateries like Frankie’s, bars like Container, along with Ryan’s Irish Pub amongst many others.

Accra has an array of hotels, inns and guest houses. There are three five-star hotels: The Movenpick Ambassador Hotel, The Labadi Beach Hotel and The La Palm Royale Beach Hotel. Apart from these, there are numerous three and four star hotels, viz., The Golden Tulip Hotel, Hotel Wangara, Airport View Hotel, and many more.

Where is Ghana Located