Turku City Map presents the satellite view of the City. The map provides you with an accurate geographic location, towns, and places in Turku. 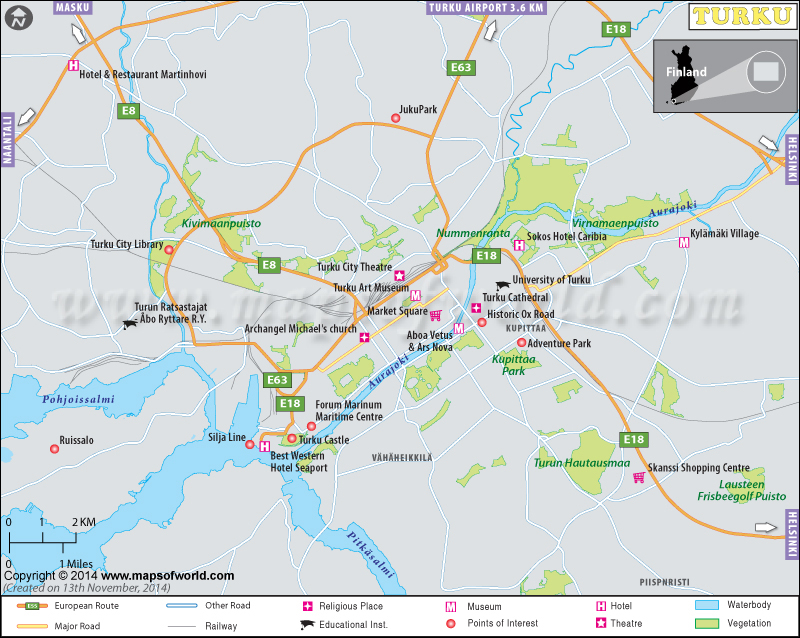 Turku is the capital of the region of Finland Proper and the Province of Western Finland. The city derived its name from an old Russian word, turgu, which means “marketplace”.

Founded in the 13th century, it is the oldest city in Finland. It was the residence of the Governor-General of Finland and attained the status of capital city from 1809 till Helsinki replaced it in1812 after the Finnish War. It is considered the ‘second city of the nation. Turku is a regional and provincial capital as well as an important administrative center. The 20th-century Turku has been entitled “Finland’s gateway to the West”. It is now the central economic hub of southwestern Finland and the capital of the Turku economic district.

The various museums in the city attract people from far and wide.

There are numerous museums like the Turku Art Museum, Waino Aaltonen Museum of Art, Jean Sibelius museum- the only museum in Finland that specializes in music, Aboa Vetus museum, and The Luostarinmaki handicrafts museum. Turku Castle is a historically important site in the city. The two islands in the city such as Uto and Rosala are a fantastic break for the people, especially during summer.