About city The city of Prague is the capital of Czech Republic in Eastern Europe. Known for its historical buildings and rich cultural heritage, Prague was the capital of Bohemia,… 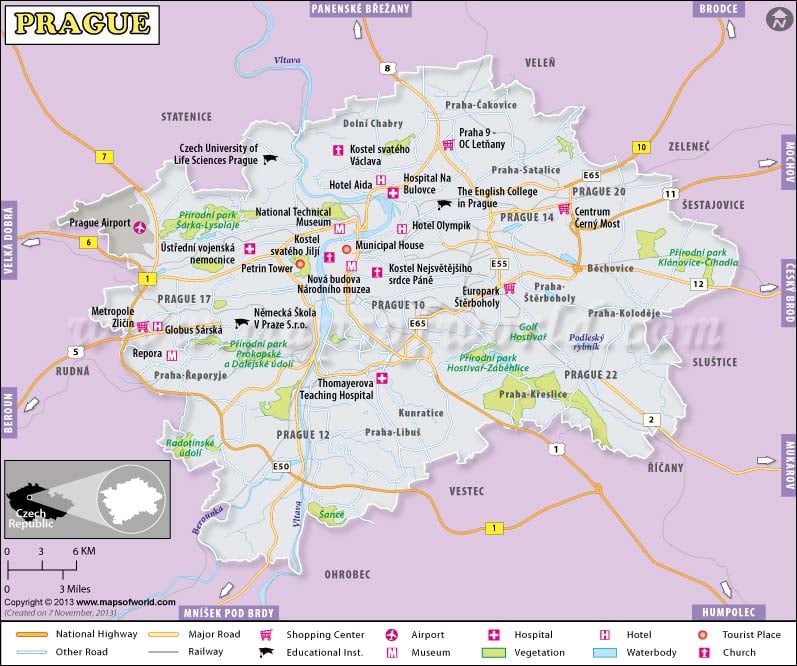 The city of Prague is the capital of Czech Republic in Eastern Europe. Known for its historical buildings and rich cultural heritage, Prague was the capital of Bohemia, the capital of Holy Roman Empire for some time and the capital of undivided Czechoslovakia. It is the 14th largest city of European Union covering an area of 285 sq km and had a population of 1,262,106 in 2011.

According to legends, the Czech Duchess and prophetess Libuse and her husband Premysl founded the city of Prague in the 8th century. In 800 CE, the first wooden construction appeared in the place where the Prague castle now stands. It became the seat of dukes and kings of Bohemia and the capital of the Roman Emperor Otto II. It flourished under Charles IV and became the third largest city in the Roman Empire. It reached the height of cultural development under the Hapsburgs. After the first World War, the city became the capital of Czechoslovakia. It suffered some damage during the second World War, when it was occupied by Germany. During the Cold War era, it came under Soviet influence. In 1993, it became the capital of the Czech Republic.

The city of Prague is located on the bank of the Vltava River. It occupies the basin of Bohemia. The gradual expansion of the city during its 1,100-year history has led it to occupy the adjacent hill sides and river terraces. The lowest point of the city lies 623 feet above sea level while the highest point lies at a height of 1,247 feet on the White Mountain.

Prague enjoys a mixture of humid continental and oceanic climate. Summers are warm while winters can be really cold with frequent snowfall from mid November to late March. Though overall rainfall is low, thundershowers occur in summer.

You can reach Prague by various means. These are:

The summer season is the most popular tourist season but this increases the congestion at the hotels. Spring and autumn are the best times to travel to Prague. Winters are very cold, but it is the best time to enjoy Christmas festivities and the famed Music Festival.

Several festivals are celebrated throughout the year in Prague. Some of them are as follows:

There are a number of spots of historical interest in Prague. Some of them are as follows:

Prague offers a vast variety of accommodation and the stay options here are sure to fit into the budget of most individuals, especially tourists. It includes 5-star hotels like Le Palais, Alchymist, Golden Tulip Savoy, and Corinthia, while Hotel Green Garden, Savic, Grand Hotel Praha, Perla, Union, and Denisa are the major 4-star hotels. The 3-star hotels include Hotel Rococo, William, Betlem, and Saint George. Budget accommodations are also plentiful in Prague.