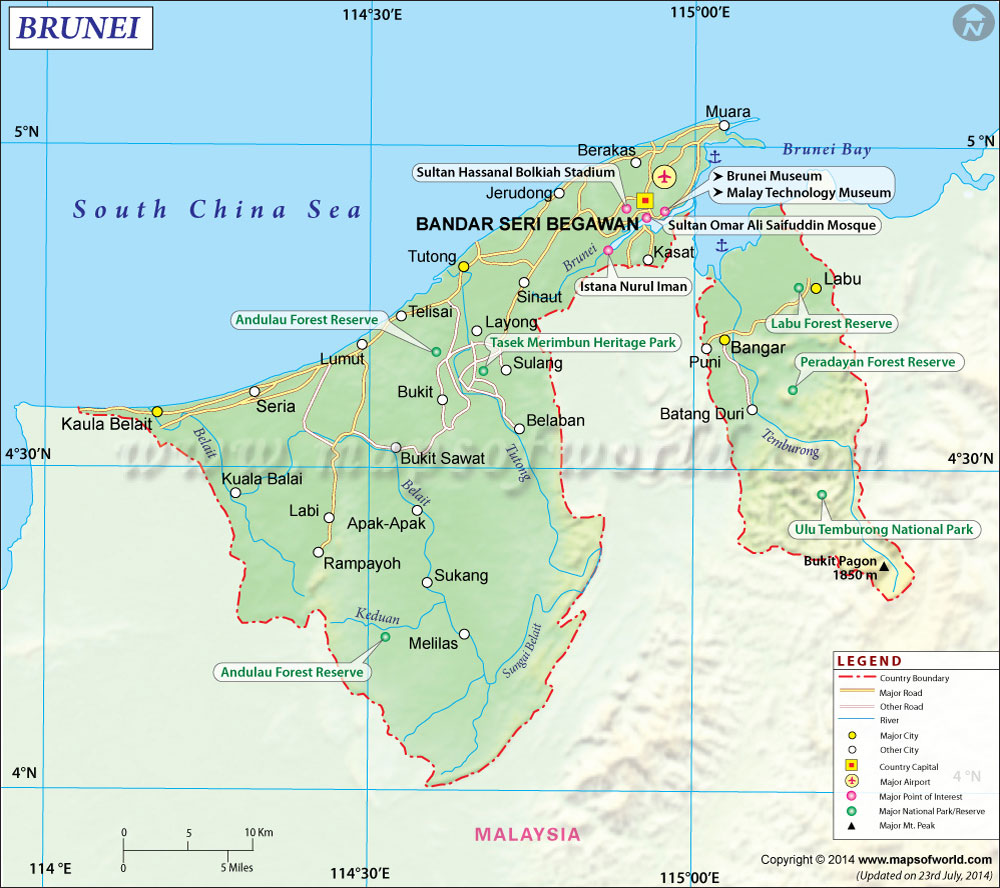 Explore this Brunei map to learn everything you want to know about this country. Learn about Brunei location on the world map, official symbol, flag, geography, climate, postal/area/zip codes, time zones, etc. Check out Brunei history, significant states, provinces/districts, & cities, most popular travel destinations and attractions, the capital city’s location, facts and trivia, and many more.

Brunei, situated in eastern Asia, has rich resources of oil and natural gas. The Sultanate, once a powerful independent kingdom, was annexed by Britain but gained independence in January 1984.

Brunei consists of a narrow coastal plain and a hilly interior. There are extensive swamps, especially in the west and northeast. Most streams flow north to the coast, including the Belait River, which is the longest river in the country.

The flag of Brunei is yellow with two diagonal bands of white (top, almost double width) and black starting from the upper hoist side. The national emblem in red is superimposed at the center.

The emblem includes a swallow-tailed flag on top of a winged column within an upturned crescent above a scroll and flanked by two upraised hands.

Brunei is located on the northern coast of the island of Borneo, in eastern Asia, bounded on the north by the South China Sea, and on all other sides by the Malaysian state of Sarawak, which also divides the country into two parts.

Brunei has a humid, tropical climate, with an average annual temperature of about 27°C. The country experiences heavy annual rainfall, more so, during the monsoon. In fact, there is no dry season at all.

Flora And Fauna of Brunei

Around 84% of the country is covered with dense tropical rain forests, which also account for much of Brunei’s vegetation. The country also has a rich wildlife and includes animals like monkeys, varied kind of birds and reptiles. Some threatened species are also found here and about 20% of the land comes under the protected banner.

About two-thirds of the population of Brunei is made up of Malay and the remaining one-third consists of Chinese, Indians, and other groups like Dayaks and Belaits. Islam is the state religion, and the majority of the people are Muslims. Though the official language is Malay, English is also used for official purposes.

Education is compulsory for children aged 5 to 16 years and it is free at all levels. Primary and secondary education is provided in Malay, English, or Chinese.

The economy of the country is mainly governed by the production of petroleum and natural gas. Crude-oil output in 2001 was 79 million barrels. However, production of rice does not meet entirely the country’s demands. Apart from this, production of rubber, pepper, and animal hides also contribute towards economy but only to a small extent. The gross domestic product of the year 1998 worked out to $15,060 per capita and was rated among the world’s highest economic growth rates. But the oil production is slowly exploiting the country’s forest reserves and this can slowly become a cause of concern.