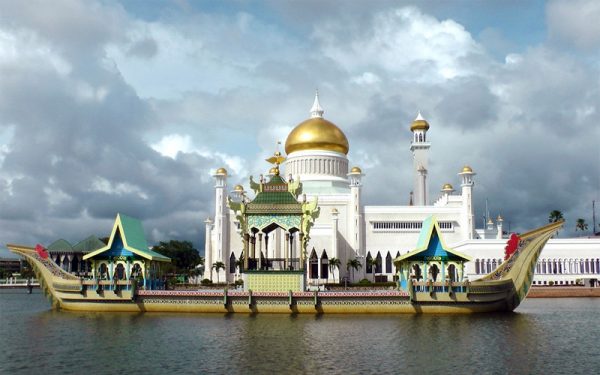 Consisting of lush green tropical forests, a diverse range of flora and fauna and a wealth of traditional heritage, the sultanate of Brunei is door that opens up to a world of beauty and riches. From national parks abounding in wildlife to historical sites, royal palaces, cultural centers and oil reserves, Brunei contains everything that is sure to fascinate any tourist. Brunei, tourism forms a significant aspect of the country’s economy.

The country of Brunei is in the Asia continent and the latitude and longitude for the country are 4.8167° N, 114.7694° E. Brunei Location Map

Brunei covers a total area of 2,226 square miles and there are 415,717 people inhabiting the nation as per the 2013 estimate. It is the second smallest country in South-East Asia. More Facts

Places to Visit In Brunei

Brunei Museums are a cultural treasure trove. The historical monuments, the deserted archaeological remains and the ancient relics of the city bear testimony to its rich cultural past. Brunei museums have housed some of these relics and preserved them for posterity. The Royal Brunei Museum situated along the banks of the Brunei River is known for its rich collection of antiques which includes a ceramic collection retrieved from a shipwreck dating back to as many as 500 years.

Brunei Theaters
The cultural life of Brunei holds limited scope for performing arts and entertainment. Despite been historically rich, the cultural life of the country gets marred by the absence of Brunei theaters and lack of venues for hosting cultural extravaganzas. The Malay instruments are often used as an accompaniment to make the event more distinctive and give it that extra local flavor. These kinds of performances are mostly organized at official occasions. However, significant amongst the theaters in Brunei is the Radio Television Theater. The theater is often used to host cultural shows. The capital of Brunei, Bandar Seri Begawan, has a couple of theaters which organize screenings of popular Chinese, Malay and English movies. Some hotels also have private theaters of their own. One such hotel is the empire Hotel which includes a mini-multiplex cinema. The Brunei theaters, though few in number, offer good entertainment.

Mosques in Brunei
The main religion of Brunei is Islam. Therefore one can find several mosques in the country. The most famous Mosques in Brunei are Sultan Haji Hassanal Bolkiah Silver Jubilee Mosque and Omar Ali Saifuddin Mosque. The architecture of both these mosques is amazing.

Brunei Monuments
There are several monuments in Brunei that are scattered across the length and breadth of the country. Brunei monuments speak volumes of its rich cultural heritage. The monuments exemplify Islamic art and architecture. The mosques and the archaeological sites are all works of art in themselves. The sites are decked with intricate carvings and antic sculptures. One of the landmark monuments in Brunei is the Istana Nurul Iman. It is the residence of the Sultan of Brunei. The largest residential palace in the whole world it is located on a hill. One can get a panoramic view of the capital from the palace. It is emblematic of the Brunei royalty and the center of administration and governance.

Kampong Ayer – Venice of East
With dense tropical forests and a number of tourist attractions distributed all over the country, Brunei is a haven for tourists. From Bandar Seri Begawan to the Jerudong area, Brunei abounds in various places of interest. Unique among them is the Kampong Ayer, Venice of East. This place lies in the Brunei-Muara district and is popular as the ‘Water Village’.

The appellation, ‘Venice of East’ was given to Kampong Ayer by the Europeans who visited the place during the early times. Today also, Kampong Ayer-Venice of East continues to charm and attract large crowds of tourists visiting Brunei. The entire village of Kampong Ayer in Brunei consists of traditional houses that are built on stilts on the Brunei River. Hence the name is Water Village.

Brunei Beaches
Brunei is bordered by a coastline throughout the length of the country. The Brunei coastline encircling the South China Sea with its sun kissed beaches, warm sands, enrapturing sunrises and sunsets is very popular with the locals as well as with the tourists. There are several Brunei beaches. Of them the Meragang beach, the Serasa beach, the Muara beach, the Lumut beach and the Pantai Seri Kenangan beach are well known. The beaches in Brunei serve as popular spots for outings and picnics. The Muara beach is especially equipped with amenities like picnic spots and playground for children. The Meragang Beach is often known as the Crocodile Beach though there are none. The Pantai Seri Kenangan beach is known for its breathtaking beauty. The Serasa beach is ideal for water sports and thus very popular amongst adventure loving people. The Lumut Beach also holds a lot of attraction amongst tourists.

Serasa Beach
Serasa Beach in Brunei is the favorite destination for lovers of water sports. Beaches in Brunei make for a pleasant retreat from the monotonous urban existence. The water, the sands and the entire natural setting seem to beckon the people of Brunei as well as tourists. It is located at a stone throw distance from Muara. Tourists on a visit to the Muara Beach can drive to the Serasa beach and reach the spot in barely 10 minutes. It is extremely popular with water sports enthusiasts. The beach is equipped with the Serasa Watersports Complex. The complex is provided with all the amenities necessary for a fun filled aquatic adventure experience. These facilities match up to global standards. The various water sports conducted by this complex include windsurfing, jet skiing, power boat racing, kayaking, water skiing, regatta sailing along with training in water sports. There is also another Watersports complex in the making namely the Government Watersports Complex. The project, nearing completion, is expected to provide world class facilities for the various water sports. The complex targets both water sports professionals as well as amateurs.