Places to Visit in Puerto Rico 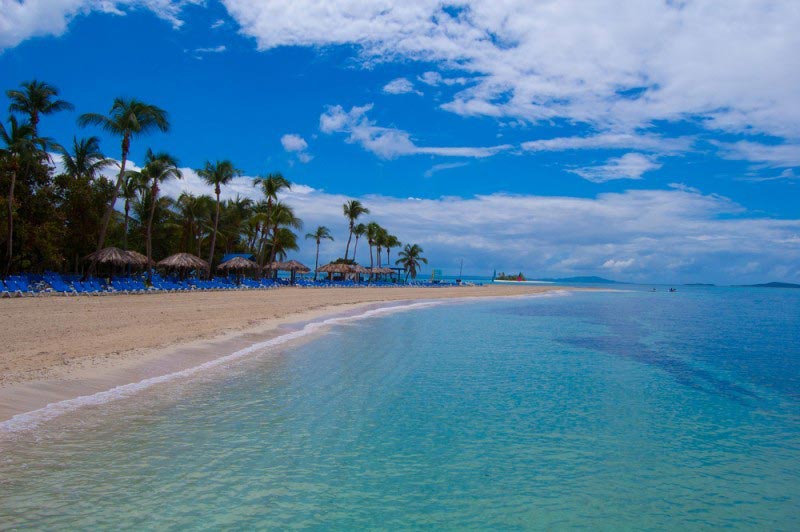 The archipelago of Puerto Rico includes islands like Vieques, Mona, Caja de Muertos, etc. Puerto Rico is located towards the northwestern part of the Caribbean. San Juan is the capital city of Puerto Rico. The US territory of Puerto Rico has on offer surfing waves, golf courses, and beaches for the tourists.

The culture is a nice blend of Spanish, African, North American, and Amerindian culture. So, you find African music and dance, Amerindian names, Spanish and English being spoken, all at the same place, Puerto Rico. The official languages of Puerto Rico are English and Spanish. Most of the tourists are observed between the months of December and April. Be careful if you are visiting Puerto Rico between the months of May and November, the hurricane season period. Puerto Rico’s main airport is the Luis Muñoz Marín International Airport in San Juan. Jet Blue, Continental, and Delta Connection fly to smaller airports in the cities of Aguadilla and Ponce. As Puerto Rico is a part of the US commonwealth, U.S. Immigration and Customs Laws and Regulations apply, which can be stringent for some people.

Travelling between the mainland of Puerto Rico and San Juan, Ponce and Aguadilla is like travelling between the two mainland cities. US and most other international airlines offer direct flights from many cities to Puerto Rico. These flights are economical and numerous. American Eagle operates a hub at SJU and airlines such as Caribbean Sun, Liat and Cape Air offer cheap and easy connections to most of the Caribbean islands. Luggage Carts are available in the international terminal of the airport. Porters are also available at the exit point who assist the tourists at a good price. It is easy to get taxis from the airport to the nearest hotels of your choice. There are even some hotels that provide complimentary transportation in special buses to their properties. Puerto Rico Tourism Company representatives normally assist the passengers who come to this country. All major car rental agencies are located at the airport.
Many others offer free transportation to their off-airport sites. The usual flight times are as follows: Chicago 5 hours, Los Angeles 7.5 hours, Madrid 7 ¾ hours, New York 4 hours, Atlanta 3.5 hours, Toronto 4 ¼ hours and Miami 2.5 hours. The check-ins and checkouts are very strict in the airports.

Getting to Puerto Rico by boat is another option. A commercial ferry service connects the west coast city of Mayaguez and Santo Domingo in the Dominican Republic. This particular service is very popular and a convenient way to travel between both the named cities. It is a known fact that more than a million passengers visit Puerto Rico on cruise ships every year. This is either through the many cruise lines of San Juan or through the visiting lines. Passports are not needed by the US citizens who use this service. However, other residents might need it.
Transport

If you want to travel within Puerto Rico, please do remember to bring your own car or rent a car for yourself, since the public transport system is not good enough. You could also avail of the local taxis, known as público, for traveling within Puerto Rico. San Juan is better off as in places other than San Juan, there are no scheduled buses or trains. Thus, in most cases it is seen that the travelers choose to rent their own cars. Some budget travelers can though use the shared cab or the publico system. If somebody is planning to explore an island outside San Juan, renting a car is, by far, the most convenient way to get around. Rentals are available from the airport itself.

Sometimes it is available from the larger hotels also. Note that the parking in San Juan is virtually non-existent and traffic in all major cities is bad during the rush hours. Road signs in Puerto Rico are in Spanish language versions of the US Counterparts. So there is no problem figuring things out. One should note that distances are in kilometers, but speed limits are in miles. In addition to the regular free highway (carretera) network, there are three toll roads (autopista) in Puerto Rico. These roads are much faster and less congested than the highways. Tolls for a 2-axle car range from $0.70 and $1.50. The lanes on the left are reserved for people with RFID toll passes which one does not probably have in the rental car. As you move from the highways of Puerto Rico, the roads quickly become narrow, especially up in the mountains. Roads that are only one-and-a-half lanes wide are common. Signs on roads are not seen much though intersections do almost always show the road numbers. Thus, a detailed highway map will come in handy.

A público is a shared taxi service and is much cheaper than taking a taxi around the island. It might also be less costly than a rental car. Públicos can be identified by their yellow license plates with the word “PUBLICO” written on top of the license plate. The main público station is in Río Piedras, a suburb of San Juan. Publicos are also known as colectivos and pisicorres. There are two ways of getting on a público. The easier way is to call the local público before the day you want the ride. This is the convenient way though will be expensive. The cheaper way is to just reach the público terminal as early as one can and get it from there. Públicos do give frequent stops to pick up or drop passengers and may take a while to get to their destination terminal. The cost is variable. It depends on the size of the público and the distance being traveled.

The ferries depart from San Juan and Fajardo, the two major islands of Puerto Rico.

Puerto Rico is the best place as regards nightlife. However, the Caribbean has a well-deserved reputation as a quiet, laid-back place, a place where hammocks are more common than discos. The nightlife in the island’s prominent cities and resort hotels rivals that of the other cosmopolitan cities of other countries. The San Juan area includes not just an old city resembling a museum movie set, but also a theater, fine restaurants, and wild clubs of Santurce as well as the Condado-Isla Verde strip.

These areas are best known for less hectic bar-hopping or trying one’s luck at a hotel casino. In Piñones nightlife meets the beach. Many island towns have their own special variety of fun. Boquerón is one such place. It is a students’ haven. Luquillo and Piñones are the favorites of the natives and family choices are La Quancha’s boardwalk or a boat ride on the bio-luminescent bay at Parguera. These places are ideal spots of Entertainment and Leisure in Puerto Rico.They are always a treat. Vieques is a famous place for live jazz. Tourists can duly enjoy the midnight swim in phosphorescent waters. Mingling with people in the San Juan area bars, discos and popular restaurants is an another entertaining option. Bars are not limited to only the San Juan area. In fact, these are found in every corner of the city. There is another added advantage and that is the special charm of resorts in Dorado, Rio Grande, Ponce, and Mayagüez. These are Puerto Rico’s topmost areas of entertainment. Besides, Puerto Rico has some of the most appealing and famed casinos in the Caribbean. Tourists can enthrall themselves in the casinos of blackjack or roulette. They can try over their luck and feel the suspense and anticipation. Excitement is at its peak at the casinos of Isla Verde, Condado, Old San Juan, and even on the islands.

Dining in Puerto Rico is a part and parcel of merriment in Puerto Rico. It is the most delectable and full-time adventure and experience. From boutique restaurants serving the latest fusion cuisine to traditional Puerto Rican Mesones food ranges from snack shacks on the beach to classic steak houses. Puerto Rico offers as many choices of dining atmosphere and cuisine as any other major city in the neighbouring countries.

The inland towns along the scenic highway of Puerto Rico hold annual festivals with live music, arts, and crafts. Gambling is not unknown in the country. Roadside gambling at the motorized miniature horse races is termed as the picas. The Lelolai Festival is a popular program or a popular festival designed or made mainly for the anxious visitors.
Shop in the major areas of Puerto Rico and you will never ask for more as Puerto Rico is the place of shopping malls and outlet centres. The most notable among this is the Plaza las Americas which is the largest shopping mall in the Caribbean till date. The Condado section of San Juan is home to fine designer stores such as Cartier, Gucci, Ferragamo, Mont Blanc, and Dior.