What state tops the US Well-Being Index? - Answers 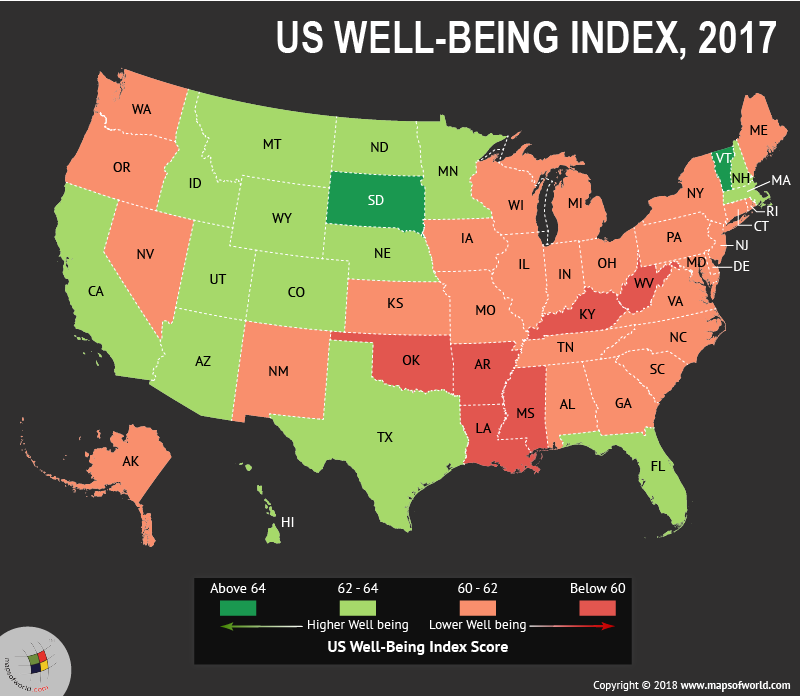 According to data released by Gallup and Sharecare for 2017, only a few US states have shown improvement in well-being of people in general. In comparison to the data of previous year, the statistics are instead on a decline. This form of result has been announced for the first time in the ten-year period of the Gallup-Sharecare Index.

In this index, five important measures are considered to estimate the overall well-being of people and these elements are social, physical, purpose, financial and community. The states are then given scores between 0 to 100, with 100 representing highest possible well-being and 0 representing the lowest.

Unlike last year, Hawaii does not stand at the top rank and has dropped two positions, with a score of 63.4. At the second spot is Vermont, with a rounded score of 64.1, which is only 0.6 points higher than its score of last year. The state which tops the ranking this year is South Dakota, having a score of 64.1.

It is interpreted that the scores of other states have lowered because of the decline in purpose and social well-being of people. In all elements separately, it was Hawaii that ranked in top ten. People living there tend to exercise a lot and experience lesser levels of stress. Obesity rates are also low in the area.

West Virginia stands at the bottom of the index and has remained at that position for nine years. It is evident as incidences of high blood pressure and diabetes are the most among the people in the state.

To get to know how each state scores in the 2017 Well-Being Index, refer to the table below.