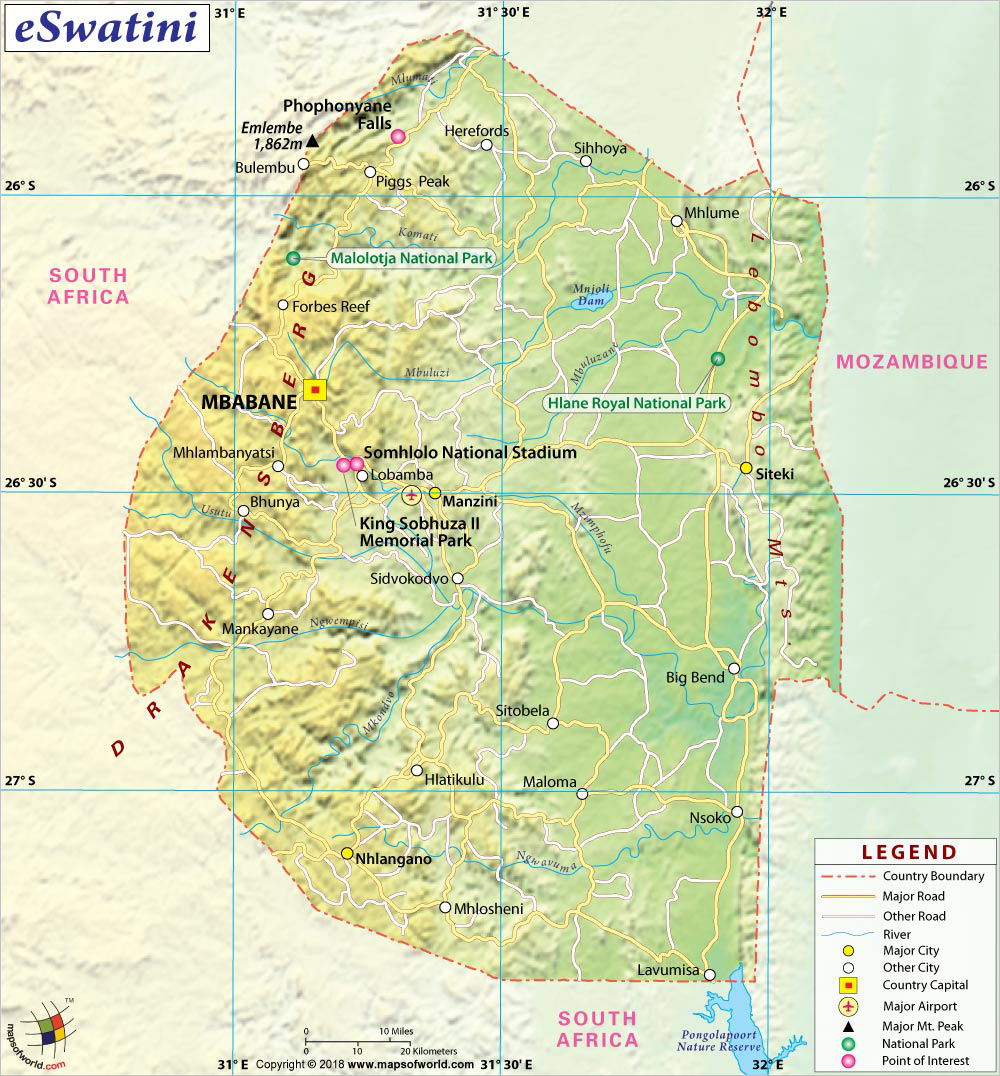 eSwatini (Swaziland) has a very long human history dating back at least 200,000 years, with the Khosian hunter-gatherers of southern Africa. The Bantu people migrated to the region from Mozambique and settled in what would later become eSwatini (Swaziland), establishing farming communities.

Under the leadership of Ngwane III, the Swazi community was established around 1745. The Ngwane Kingdom had territory disputes with the nearby Ndwandwe Kingdom of the Zulu people. The Swazis were forced north due to this conflict, but the successive leaders continued to expand the kingdom’s territory, adding new clans and lands. One of the most important of these leaders was Mswati II, who was in power from the 1840s, and made many land conquests until his death.

eSwatini (Swaziland) is a landlocked country that shares most of its border with South Africa and towards the east with Mozambique.

Much of Swaziland’s interest lies in its natural and scenic regions, many of which are true rugged wilderness, offering adventure. eSwatini (Swaziland) is home to several major scenic regions, including game reserves and protected parks. One of the best parks in the country is Hlane Royal National Park, which is home to many elephants and rhinos, as well as giraffes and zebras, and lions and leopards. The park is fairly small, but sighting animals, especially rhinos, is very likely. It is also possible to camp out at the park overnight for a more complete experience. Mkhaya Game Reserve is a protected habitat for many endemic and endangered species, including rhinos, elephants, and antelope. Mlawula Nature Reserve is situated within the Lubombo mountain range, and is home to diverse plant and animal life. The park is a great place to explore and hike in the mountain trails.

The cities of eSwatini (Swaziland) do not have many attractions other than their markets, some of which sell local handicrafts, including the Swazi candles, and often their nightlife. There are, however, several cultural experiences that can be had in the cities. eSwatini (Swaziland) is home to a colorful culture, which it celebrates with ceremonies and community events. In Lombaba are the traditional royal ceremonies of the Reed Dance (Umhlanga) and the Incwala, which honor the queen and king respectively.

Travelers should note that eSwatini (Swaziland) has one of the highest rates of AIDS worldwide, and life expectancy has come down to 32 years (in 2009) as the disease has reached epidemic proportions in the country.

Swaziland’s international airport is called Matsapha Airport, and is located outside of Manzini. The airport offers service to South Africa and other regional destinations. There are also several bus systems that offer long-distance transportation into eSwatini (Swaziland) from several cities in South Africa and Mozambique’s Maputo. Road conditions vary in eSwatini (Swaziland), and driving can be dangerous. Minibus is also the best bet for travel between cities within eSwatini (Swaziland), while taxis are also available most of the time. Minibuses are also a good way to get around the country’s parks.