Design: The South Sudanese Flag consists of three horizontal stripes- the top stripe is black, the middle is red and the bottom is green. On the left side of the flag… 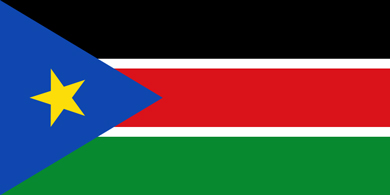 The flag of South Sudan was adopted on July 9, 2005 by the Sudan People’s Liberation Movement. The SPML was a political wing that fought the Second Sudanese Civil War against the Sudanese government from 1983 to 2005, and has been influential in the creation of a sovereign State of South Sudan. The SPLM proposed ‘Republic of South Sudan’ as the name of the new state; ‘South Sudan Pound’ as its currency; and the current flag of the Government of South Sudan (GOSS) as its official flag.