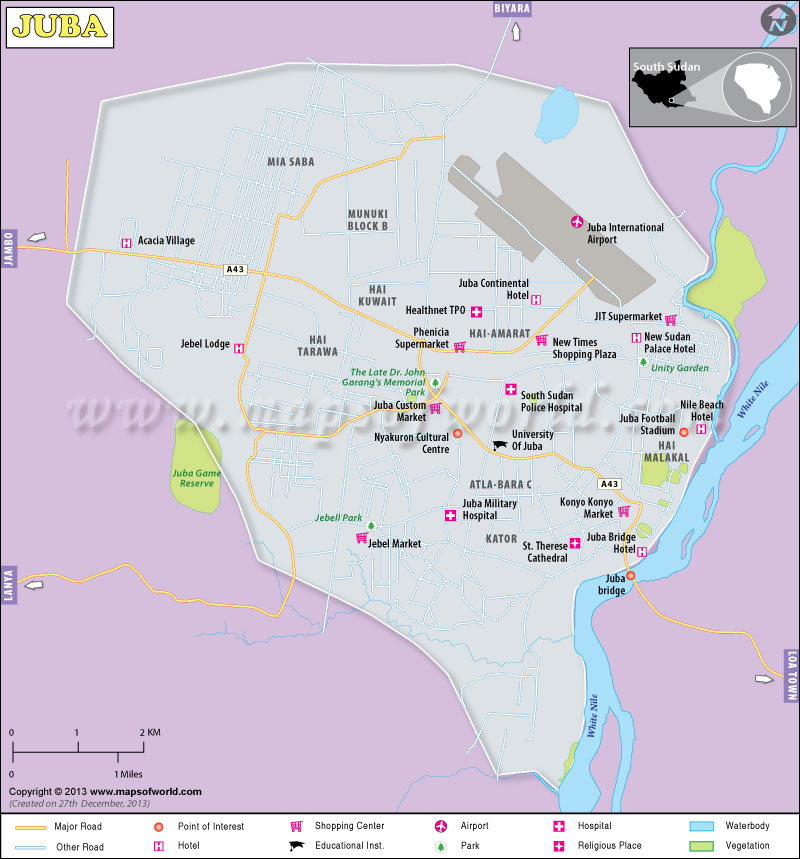 Juba is the capital of the Republic of South Sudan as well as the capital of the state of Central Equatoria. Home to over 370,000 people, the city is also the administrative center of the country. It is a river port and serves as the agricultural commercial center in the area. Juba Arabic and English are the prevalent languages here.

The country was originally a part of Sudan and the separation took place in 2011. As a part of Sudan, it was under the colonial rule of Britain and Egypt from 1899. The British Empire had hoped to join this area to the country of Uganda but the Juba Conference of 1947 resolved to unify the northern and southern area of Sudan into one nation. The unification resulted in the outbreak of two Civil Wars and Juba was the center of the two battles. In 2005, the city was declared as the capital of the newly formed Autonomous Government of Southern Sudan. In 2011, the Republic of South Sudan was formed and Juba was established as its capital.

Juba is served by the Juba Airport which is located on the west banks of the River Nile. Airlines like Nasair, Fly Dubai, Air Uganda and Sudan Airways operate several flights to and from cities like Cairo, Dubai, Asmara, Khartoum and Entebbe.

The city is also accessible from Kampala which operates daily buses to and from Juba.

Inside the city, boda bodas or motorbike taxis are the fastest yet not the safest way of traveling. Cars are a safer option and are readily available all throughout the city.

Juba features a tropical climate and is hot and humid all throughout the year. From April to October, the city experiences its rainy season with the average precipitation being quite over 100 mm. From November to May, although there is little or almost no rainfall, temperatures can rise up to 40 degree Celsius. Despite this, the best time to visit is from November to May due to the relatively dry weather.

As a newly established independent nation, the country celebrates mostly religious and traditional festivals. Some of them are as follows:

Juba has very few sights as most of the city is still developing. The following are the places recommended for a visit:

Most hotels in Juba are of the mid range and the city also has two camps for the budget traveler. Mango Camp and Oasis Camp are cheap, provide free wireless internet and also have gyms.

Acacia Village is the most popular accommodation option here with services like a tennis court, a restaurant, air conditioned rooms and a swimming pool. Juba Bridge Hotel and Bros Hotel offer comfortable services and surroundings and also have a brilliant view of the Nile. Beijing Hotel, Hamza Inn and Holiday Hotel are some of the other popular accommodations in the area.