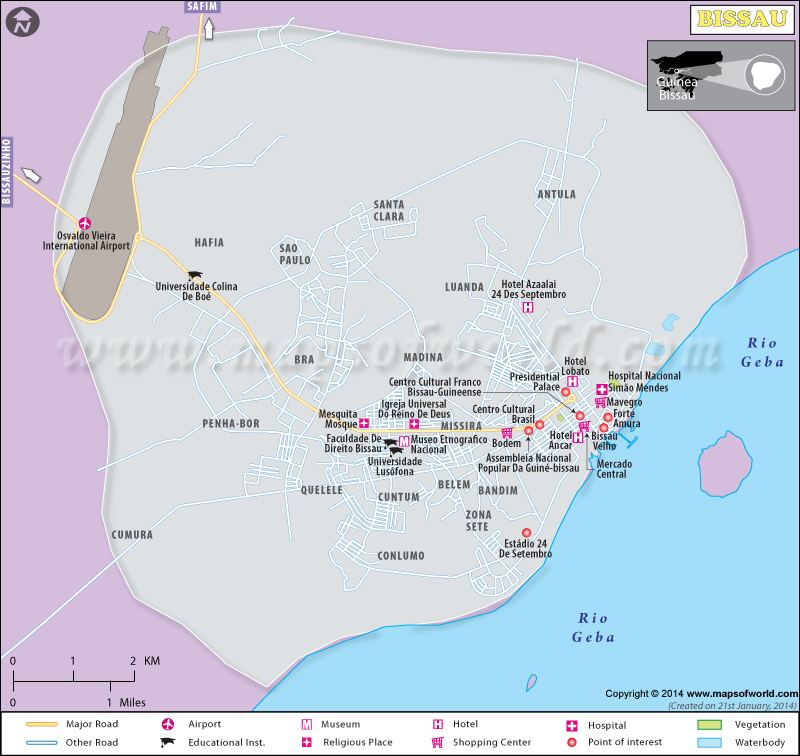 Bissau is the capital of Guinea Bissau – a country in sub-Saharan Africa located on the coast of the Atlantic Ocean. It is a port as it is located at the mouth of the River Geba. The city was founded by the Portuguese in 1687. In 1974, the country of Guinea Bissau won its independence and Bissau became the capital, though political unrest has periodically disturbed the peace of the city. Several tribal populations reside in the city. Bissau covers an area of 77 sq km and had a population of 395,954 in 2010.

Bissau is located at the mouth of the Geba River estuary on the Atlantic coast. Hence, it is at sea level. The coastland is often marshy. This low-lying region has some good beaches.

The region has a tropical Savannah type of climate though it receives heavy rainfall from the monsoons. January is the coldest month while March is the hottest month. The Harmattan is a wind that blows from the Sahara from December to May and modifies the climate.

You can reach Bissau by air. There is an international airport which has daily flights from Lisbon in Portugal. Apart from this, there are flights from Dakar in Senegal to Bissau.

You can also travel to Bissau from Senegal by road. Bush taxis are available. Small mini-buses called toko tokos are commonly used for traveling by road. You should always carry your passport, return ticket, and proof of vaccination against yellow fever with you.

The warm humid climate is not very comfortable. The best time to visit Bissau is from November to February.

The culture of Bissau is mixed. Portuguese is the official language but since its independence from Portugal, most of the settlers have gone back to Europe, and today they constitute only a small percentage of the population of Bissau. Most of the population consists of members of different African tribes. The majority of the people practice animism, though some have now converted to Islam. The result is that the culture of Bissau is very colorful.

The most important festival of Bissau is its annual carnival. It is mostly celebrated in February, four days before Lent, though only a minority of the population is Christian. The hundreds of tribes that live in Guinea Bissau show off their culture at this time. The members of the tribe hire boats or trucks. They dress you in their traditional costumes of shells, leaves, cow horns, and blown-up spined husk of boxfish. They pour into the city from different corners of the country. This is one of the most vibrant cultural celebrations in all of Africa.

There is not much to see in Bissau except take excursions to one of the gorgeous beaches or national parks. Some of the attractions of the city are as follows.

Bissau offers a number of accommodation choices. The Azalai 24 Setembro on Avenue Pansau Na Isna, Hotel Ancar in Avenue Oswald Vieira, Hotel Malaika in Rua Justino Lopez, and Aparthotel Labato in Avenue Pansau Na Isna are good clean hotels with a high level of service. These are the expensive options. You can also go for budget hotels like Pensao Creole located in the heart of the city, Pension Central near the port, or Hotel Kaliste.

Where is Guinea Bissau Located on the World Map

Where is Guinea Bissau Located on the World...