The flag of Grenada features the usual Pan-African colors of red, Gold, and green since the country has an African origin. The flag was given official status in 1974. 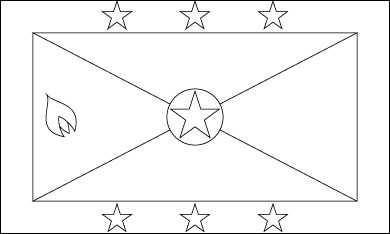 Download Picture of Blank Grenada Flag For Kids to Color

The flag of Grenada is divided diagonally into four triangles.

The top and bottom triangles are golden, and the triangles on the hoist and fly side are green. At the point where the four triangles meet in the center, a large gold star is positioned over a red circle. Centered along the hoist side is a symbol representing a nutmeg in gold and red over the green triangle. The triangles are surrounded by a red border, with three gold stars along the top and another three along the bottom.

The colors of the flag of Grenada are typical pan-African colors, reflecting the country’s ties with Africa and its African identity. The red is symbolic of the courage and vitality of the people of Grenada, and their quest for freedom. The red border represents the preservation of their unity. The gold represents the sunshine and warmth of the people and symbolizes wisdom. Green traditionally represents fertile lands. There is one star for each of the six parishes and a large star for the capital of Grenada. The nutmeg is a symbol of Grenada, as it was formerly called the Isle of Spice for its many nutmeg trees, and today it supplies about 40 percent of the world’s annual nutmeg supply.

The flag of Grenada was designed by Anthony C. George and officially adopted on February 7, 1974, a few days after achieving independence from Britain. Prior to this, Grenada had been a British colony and had used a colonial flag, which featured the British Union Jack and an ensign of Grenada. Grenada became a British associated state in 1967 when it adopted a tricolor flag with horizontal stripes of blue, yellow, and green from top to bottom. In the center was the emblem of the nutmeg. This flag was replaced with the current flag upon independence.