What are the smallest countries in the world by area? - Answers 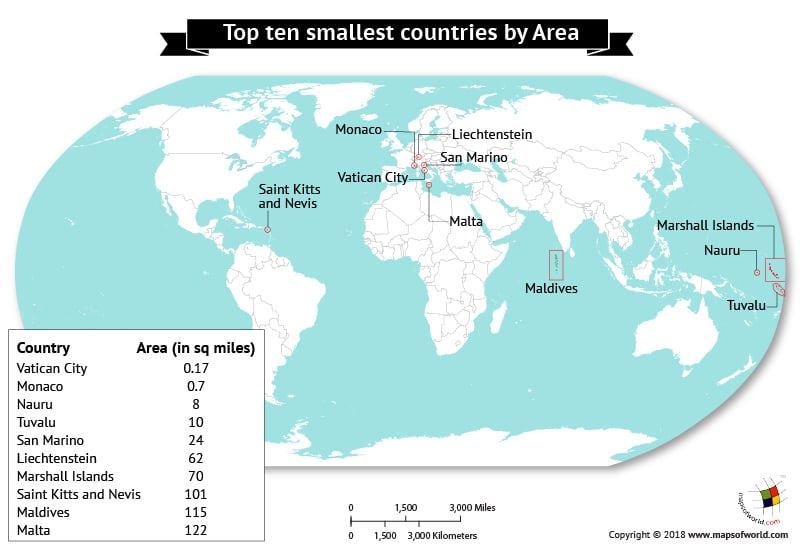 The numbers shown are based on the total land area of each country, including both land and water areas within the international boundaries.

Vatican City
It was founded following the signing of the Lateran Pacts between the Holy See and Italy on February 11, 1929. Vatican City is a European microstate with an area of just 0.17 sq. miles and a population of around 920 people. It is a city-state surrounded by Rome and tourists from across the world visit the place for having a glance at its museums- Sistine Chapel, Museo Nazionale di Castel Sant’Angelo, Vatican Museums, Stanze di Raffaello, and many more.

Monaco
Monaco, which was founded in 1815, is the 2nd smallest country with an area of 0.78 sq. miles. The country has a principal architectural style of Belle Epoque; dated back to the 1871 Prussian War era. It has an estimated population of 38,400. Its most renowned district is Monte Carlo. It is known for its upscale casinos, yacht-lined harbor and prestigious Grand Prix motor race.

Nauru
Nauru is a tiny island country in Micronesia, northeast of Australia. It has an area of 8 square miles with an estimated population of 13,049. The country was established in 1968.

Tuvalu
Tuvalu was established in 1978 and is a small island in the Oceania region. It has an area of 10 square miles and a population estimation of 11,097. An interesting fact about Tuvalu is that it has a free and compulsory education from 6 to 15 years of age.

San Marino
San Marino is a European microstate with an area of 24 square miles and a population of 33,562. It is the oldest country in Europe and is landlocked by Italy on all sides. The country’s Constitution was written in the 16th century and remains the oldest Constitution in the world. Visitors will get a medieval feeling here and the tourist attractions are its churches and museums.

Liechtenstein
Liechtenstein has an area of just over 62 square miles, and is the fourth smallest country in Europe, with an estimated population of 37,000. Divided into 11 municipalities, its capital is Vaduz, and its largest municipality is Schaan.

Marshall Islands
The Marshall Islands are a chain of volcanic islands and coral atolls in the central Pacific Ocean, between Hawaii and the Philippines. It has an estimated population of 53,066. As far as natural resources are concerned, the islands have few, and their imports far exceed exports.

Maldives
The Maldives is the ninth smallest country with an area of 115 square miles. The current estimated population in The Maldives is 443,908. It is known for its beaches, blue lagoons, and extensive reefs. Because of the beauty of it offers to the visitors, The Maldives is a great tourist attraction.

Malta
An archipelago in the central Mediterranean, Malta is known for its numerous historic sites. Romans, Moors, Knights of Saint John, French and British have all ruled over the nation. Covering an area of 122 miles, Malta is the world’s tenth smallest nation. After independence from British rule, Malta became the State of Malta on September 21, 1964, and a Republic on December 13, 1974.

*The world’s ten smallest countries by size are ranked based on information from the CIA World Factbook.