Explore map of Barcelona, it is the capital city of the autonomous community of Catalonia in Spain and Spain's 2nd most populated city, with population of 1.6 million. It is 6th most populous urban area in the European Union after Paris, London, Ruhr area, Madrid and Milan. 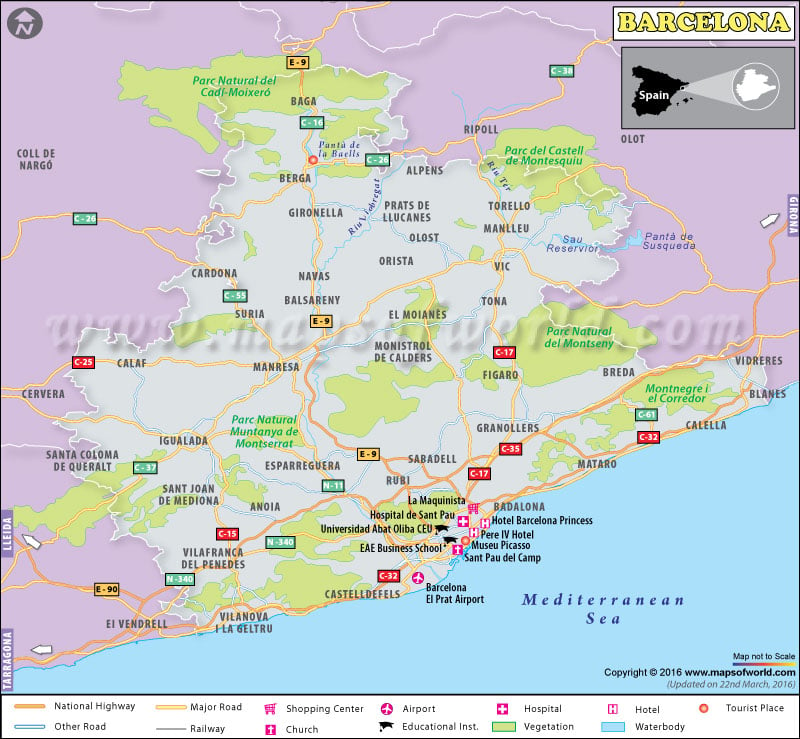 The largest European metropolis on the Mediterranean coast and the second largest city in Spain – Barcelona is the capital of Catalonia. With a population of over 1.6 million, Barcelona is the second most populous city in Spain and the sixth most populated metropolitan area in Europe. It is located on the Mediterranean coast between the mouths of rivers Llobregat and Besòsand and is bounded by the ‘Serra de Collserola’ ridge to the west. It is the 11th most visited city in the world and the 4th richest city (in terms of GDP) in the European Union. As the capital of Catalonia, an autonomous Spanish region, Barcelona is the seat of the Catalan government, known as the Generalitat de Catalunya. The official languages are Spanish & Catalonian but due to the high number of tourists most shopkeepers understand English.

The Legends Of Barcelona

There are two very popular legends about the origins of the city of Barcelona. According to one, Hercules, the Roman demigod, founded the city but according to the other the Carthagian General Hamilcar Barca had founded the city of Barcelona. Recorded history of the city dates back to 15 BC when the Romans had turned this place into a garrison. From being a Roman outpost, this zone gradually grew in economic importance and started to shape into a large city and trading center. The marriage of Ferdinand II to Isabella I of Castile in 1469 united Barcelona with Madrid and the city thus became very important in the Spanish political history. Barcelona has always been a stronghold of Catalan separatism and was the nerve center of the Catalan Revolt in 1640. The great plague of 1650 killed almost half the population of Barcelona. In the 18th century, a fortress was built at Montjuic that overlooked the harbor. The historic site where the French system of measurement was invented, the fortress at Montjuic overlooks the huge metropolis today. Barcelona was a Republican stronghold during the Spanish Civil War and the fall of the city on January 26, 1939, caused a huge population exodus across the French borders. The resistance of an autonomous Catalan state was crushed and Catalan as a language was suppressed. After the exodus there was a major influx of poorer masses from different parts of Spain, which created an economic imbalance in the city. The city received a major boost when it was chosen to host the 1992 Summer Olympic Games and regained its fame and prosperity.

When To Plan A Visit

When it comes to Spain, a warm and sunny vacation is what most tourists have in mind. July and August do get rather crowded. June and September are sunny and reasonably comfortable months. To get the best out of your Barcelona visit do try to get to the city over Sant Jordi on April 23 each year. The city brightens up for the festivities and a number of flags and other decorations are put up. June is again a good month as the city hosts the Sonar Music Festival around the third week. Midsummer night festivities all over Barcelona are certainly delightful too.

For anyone visiting the legendary Spanish city of Barcelona, the city offers an attractive walk through the history and cultural legacy of the country. Rich in traditions, picturesque in scenery, and steeped in the grandeur of medieval architecture, Barcelona is likely to leave you awe-struck.

Sagrada Familia is the most visited tourist destination in Barcelona. It is a giant temple by master architect Antonio Gaudi and has been under construction since 1889. The temple is still 30 to 80 years away from completion and the exact time taken to complete it will depend on the resources and funds available. This is a famous site – so make sure to mark Sagrada Familia on top of your tour itinerary. Another extremely popular tourist destination is the L’Aquarium de Barcelona. Extremely popular with kids, the aquarium of Barcelona is rich in its collection of marine creatures.

Poble Espanyol de Montjuic – it simply means the Spanish Village. It is a place where you can see the different aspects of the typical Spanish rural life. It is also famous for the handicraft and artifact shops. The most famous attraction of this venue is the Flamenco live show at the Tableo de Carmen. Millions flock to Poble Espanyol de Montjuic to witness the flamenco show.

Casa Mila, popularly called La Pedrera which means a quarry. Gaudi designed this architectural masterpiece and it has his signature brickwork woven design with colorful tiles.

The next is the mecca for almost a majority of football fans across the world – The FC Barcelona Football Museum. If you have seen your stars play in the Barca jersey, you simply cannot miss this place. Remember when you visit the museum; get yourself a dual ticket to visit the famous Camp Nou Stadium, the VIP lounges, the changing rooms, and the ground too.

Barcelona Zoo Situated in the Parc de la Ciutadella the best way to find the zoo is to go to Ciutadella Park and to follow the signs to the Zoo. The zoo houses a variety of animals, has a nice restaurant and electric cars. There are pony rides and a host of other attractions for children.

The Picasso Museum is a famous museum and draws millions of art fans from across the world. This museum showcases the works of famous Pablo Picasso from his early days to the final years in a chronological order.

Miro Museum This art gallery and museum houses the works of the famous artist Miro. Miro Museum not only exhibits his paintings, but his sculptures, tapestries, and early sketches as well – a unique collection of Miro’s work.

National Museum of Catalunya It showcases the history of Catalonia. Remember to add the Magic Fountain of Montjuic to your itinerary. This is an extravagant show of light, water, and sound and cannot be missed.

Barcelona is a great place for shoppers. With a host of shopping malls and signature stores showcasing all the famous brands of the world, Barcelona does not lag much behind Paris, London, and New York. And if you are looking for some bargain shopping, Barcelona has umpteen options for budget shoppers too. The Barcelona markets are very colorful and vibrant. From food markets to books, garments to designer wear, the markets are noisy yet pleasant. The famous departmental stores of Barcelona are El Corte Ingles, Arenas Commercial Centre, Diagonal Mar, Centro Commercial Gran Via 2, El Triangle, L’illa, La Maquinsta, Moll Espana Marremagnum and Boulevard Rosa. These are the most popular departmental stores of Barcelona and you must visit a few of them to taste the flavor of shopping in Barcelona.

Barcelona also has a variety to offer for the party goers too. With a large number of bars, pubs, night clubs, and strip pubs, Barcelona boasts of a vibrant and happening nightlife. If you visit Barcelona and do not savor the nightlife at a club or a pub, the visit remains incomplete. 7sins bar, Dunne’s Irish bar, Eclipse Bar, Ice Barcelona & La Fianna are some of the most popular bars in Barcelona. If you wish to visit a club then the list is longer. Choose from Club Catwalk, Elephant, Harlem Jazz Club, Sala be Cool & Shoko. Also if you are in the mood for some more fun, take a VIP Limo night trip across the city. It is a great experience. Day trips are also very popular from Barcelona. Hire a car or simply take a train out of Barcelona. Visit the picturesque Zaragoza, or simply laze around the city watching the street performers on Las Ramblas. Barcelona has a lot to offer in day trips. Take one of the many trips to the other parts of Spain from Barcelona.