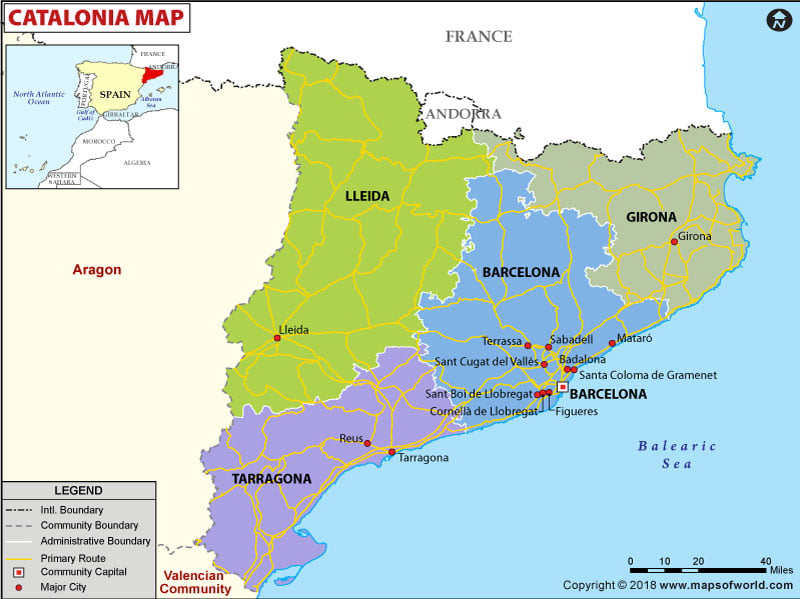 Catalonia is a distinct region in north-eastern Spain that was originally known as the county of Barcelona in the 11th century.

It came under the control of the kingdom of Aragon in the 12th century. It was included in the territory of Spain when Queen Isabella of Castile married King Francis of Aragon in the 15th century. Thereafter there was a phase of greater integration with Spain, with Castilian the dominant language in Spain also gaining importance over the local language Catalan.

In the 19th century there was a reawakening of Catalan identity and when Spain became a republic in 1931 Catalonia received more autonomy. Catalonia was a region that supported the Republicansduring the Spanish Civil War (1936-1939) until General Francisco Franco’s right-wing troops overran the city of Barcelona, defeating the resistance to his rule. During General Franco’s regime Catalonia’s autonomy was done away with, the nationalist sentiment of the region actively suppressed, and the then Catalan President LluísCompanys executed. Around 200,000 Catalans went into exile during Franco’s rule.

After General Franco died, JosepTarradellas, who had been elected Catalan President in exile, returned to Spain. An autonomous government was established which had limited powers according to the 1979 Statute of Autonomy for Catalonia. In the latter half of the 20th century and in the 21st century, movements for greater autonomy and even independence for Catalonia have become more strident.

Relations between Catalonia and Spain

Relations between Catalonia and Spain are not at their best at present.Catalonia is the richest and most highly industrialized region in Spain.Catalonia has its own executive and parliament – collectively known as the “Generalitat” and a good deal of autonomy under the Spanish constitution. However, the economic crisis in Spain has led many Catalans to believe that their region sends more money to the Spanish capital than it receives from the Spanish government.

Reasons for the Referendum on Independence vote:

Catalonia as a region has always had a distinctive language, culture, identity and an urge to govern itself. While the region has some autonomy under the present Spanish constitution, it has attempted to gain greater autonomy in the past. Earlier in 2006, a referendum was held in Catalonia about modifying the present statue of autonomy. The referendum was agreed upon in Catalonia and even passed by the Spanish government, but was changed by a disputed court ruling in 2010. Many Catalans feel the power equation between Spain and their region needs to be reset. As many as 80% of Catalans have expressed the view in opinion polls that a referendum on self-determination needs to be held.

The economic implications for Spain:

Catalonia is the richest and most highly industrialized region in Spain. Barcelona, the capital of Catalonia attracts numerous tourists year-round and is a cultural hub in Europe.

Catalonia has a vibrant manufacturing sector with textiles, food processing, chemicals, and metalwork contributing significantly to the Spanish economy. Tourism is a major part of the Catalonian economy with popular beach destinations on the Costa Brava and Costa Dorada, as well as hiking and camping options in the Pyrenees. The loss of revenue from these sectorsas well as the services sector will have a negative impact on Spain’s already struggling economy.

Economic: Should Catalonia be successful in gaining independence, it may be able to survive economically, however Spain would be negatively affected.

Political: Other separatist movements across Europe and in other parts of the world would be in interested in following Catalonia’s example of seeking independence via the referendum route.

Also Explore: What effect would Catalonia independence have on the rest of Spain?