Where is Israel Located? 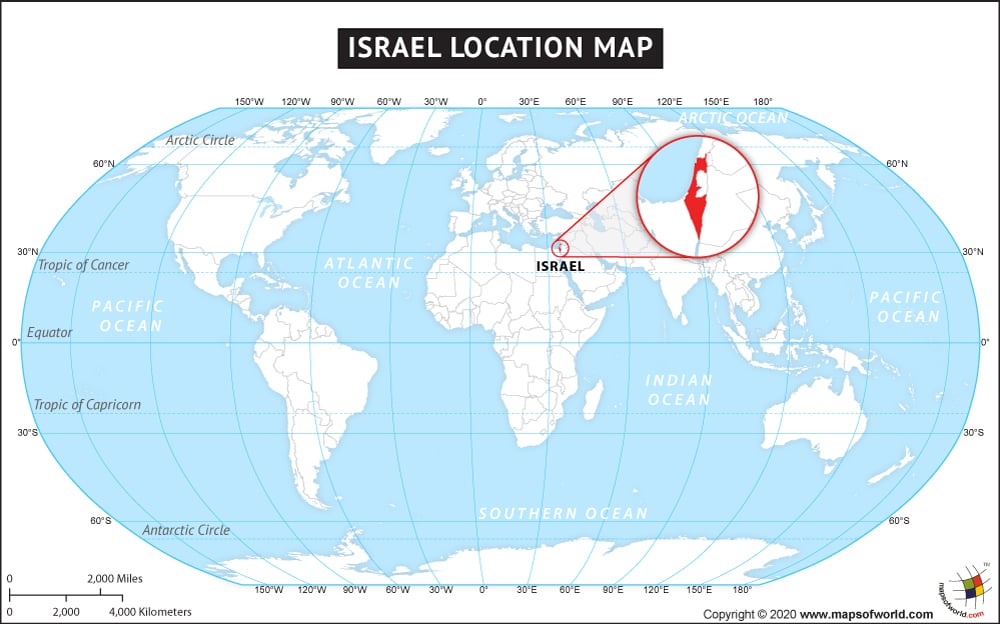 Description : Map showing the location of Israel on the World map.
1
FacebookTwitterEmail

Located at the eastern end of the Mediterranean Sea, in the Middle East, Israel covers an area of approximately 8,019.3 square miles. Officially known as the State of Israel, it is the only Jewish majority state in the world. According to a 2017 estimate, Israel comprises a population of 8,728,780, making it the 98th most populous country in the world. Jews form some 74.8% of the population, Muslims comprise around 17.6%, while the remaining 7.6% comprise of Christians, Druze, and other religions. Lebanon is located to the north of Israel, Syria to the northeast, Jordan to the east, and Egypt to the southwest. To the east and west are located West Bank and Gaza, which are Palestinian territories. While Jerusalem is the capital of Israel, Tel Aviv is the nation’s economic center.

Situated in Fertile Crescent’s Levant area, Israel is at the eastern end of the Mediterranean Sea. The country lies between longitudes 34° and 36° E and latitudes 29° and 34° N. With a height of 1,208 meters, Mount Meron is the highest point in Israel, and the Dead Sea is the lowest point of the country. The River Jordan acts as a natural boundary between Israel and Jordan. The southern part of Israel is marked by desert conditions, and comprises the Negev Desert, the northern part has snow-capped mountains. The Judaean Desert is located east of Jerusalem. Israel has a temperate climate. The eastern and southern parts of the country experience hot and dry weather.

A developed country, Israel has a strong economy which is listed as the world’s 34th largest by nominal GDP, as of 2016. The nation, which has a highly-skilled workforce, also has one of the highest life expectancies in the world. Israel is an Organization for Economic Co-operation and Development (OECD) member and is regarded for its standard of living, which is the highest in the Middle East. Israel is a highly literate country with a literacy rate of 97.8%. A parliamentary democracy with universal suffrage, the Prime Minister is the head of the government as well as the cabinet.