The map illustrates the surrounding countries with borders, 9 ethnically based states, and 2 self-governing administration boundaries. 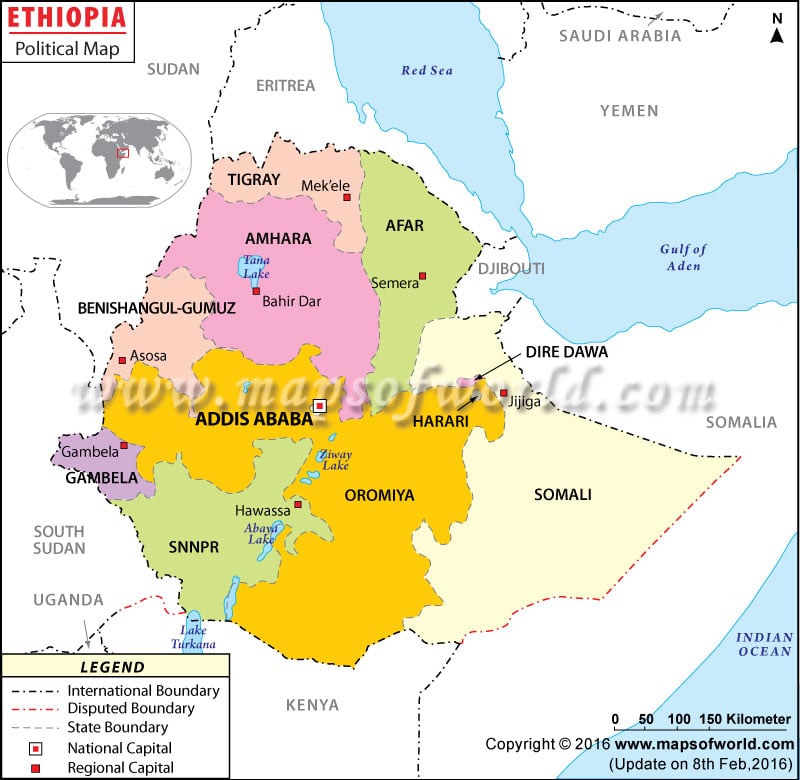 Located in the horn of Africa, Ethiopia is the second-most populated country in Africa. It is home to over 114.96 million people. The total area covered by the country is 426,371 square miles.

As shown in the political map of Ethiopia, the country shares borders with Eritrea, Djibouti and Somalia, Sudan and South Sudan, and Kenya to the north, east, west, and south respectively.

The country falls on the latitude of 8° North and the longitude of 38°East. Ras Dejen and Denakil Depression are respectively the highest and the lowest points of Ethiopia.

The Red Sea and the Gulf of Aden are situated on the north and northeastern side of Ethiopia respectively.

The Ethiopia political map shows the national capital, major cities, provinces, and other political divisions of the country. The national, provincial, and international borders of the nation are also shown on the map.

The national capital, Addis Ababa is clearly marked on the map with a red dot enclosed in a square. With an estimated population of 3,774,000, it is the largest city in Ethiopia.

For administrative purposes, Ethiopia is divided into nine states that are sub-divided sixty-eight zones and two chartered cities. The regions are:

The two chartered cities are Addis Ababa and Dire Dawa.