The national flag of the Commonwealth of Dominica was adopted on November 3, 1978. The flag has subsequently undergone modification. 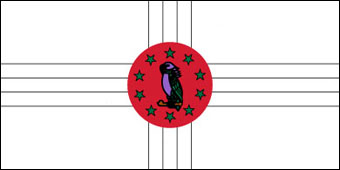 Download Picture of Blank Dominica Flag For Kids to Color

The national flag of Dominica is a green base that depicts a circular emblem of red color bearing a Sisserou parrot (Amazona Imperialis) that is perched on a twig and is encircled by ten green stars. The parrot in the emblem is the National bird of Dominica

and also symbolizes the yearning for greater heights and aspirations. The Sisserou parrot is an endangered species in the island with only a few pairs left. It is also found in the coat of arms of the country; the coat of arms of Dominica was granted on July 21, 1961.

White symbolizes the noble aspirations of the people; the black color stands for the rich black fertile soil of the island. The ten green stars stand for the ten parishes that form the Commonwealth of Dominica. The red circular emblem is a symbol for social justice. The stars are also a symbol of hope and the ideals of peace and growth cherished by the Dominicans.

The green field on the flag symbolizes the lush green forests, the natural beauty, and the rich vegetation of the island. Due to its picturesque landscapes the Commonwealth of Dominica has been nicknamed the “Nature Isle of the Caribbean.”