The Flag of the Central African Republic is a spectacular blend of yellow, blue, white, green, and red. It was adopted on December 1, 1958. 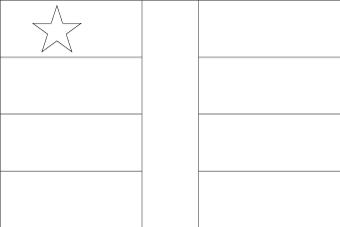 The flag of the Central African Republic (CAR) was designed by Barthelemy Boganda, the first president of CAR when it gained autonomy. In creating the flag Boganda borrowed the traditional colors used across Africa and designed this brilliant ensign.

The Central African Republic Flag bears four horizontal equal stripes with a vertical red stripe running down the middle of the flag. The top stripe is blue and is followed by white, green, and yellow. The vertical stripe is red in color. There is a yellow five-point star on the top blue stripe to the left-hand corner of the flag. All the colors used in the flag represent values dear to the country and its people. Red symbolizes the blood shed by the people of the nation to achieve independence while blue represents the sky and freedom. White represents peace and dignity, and green symbolizes hope and faith. The color yellow represents the tolerance and hospitality of the people.

Where is Central African Republic on the World Map

Where is Central African Republic on the World...