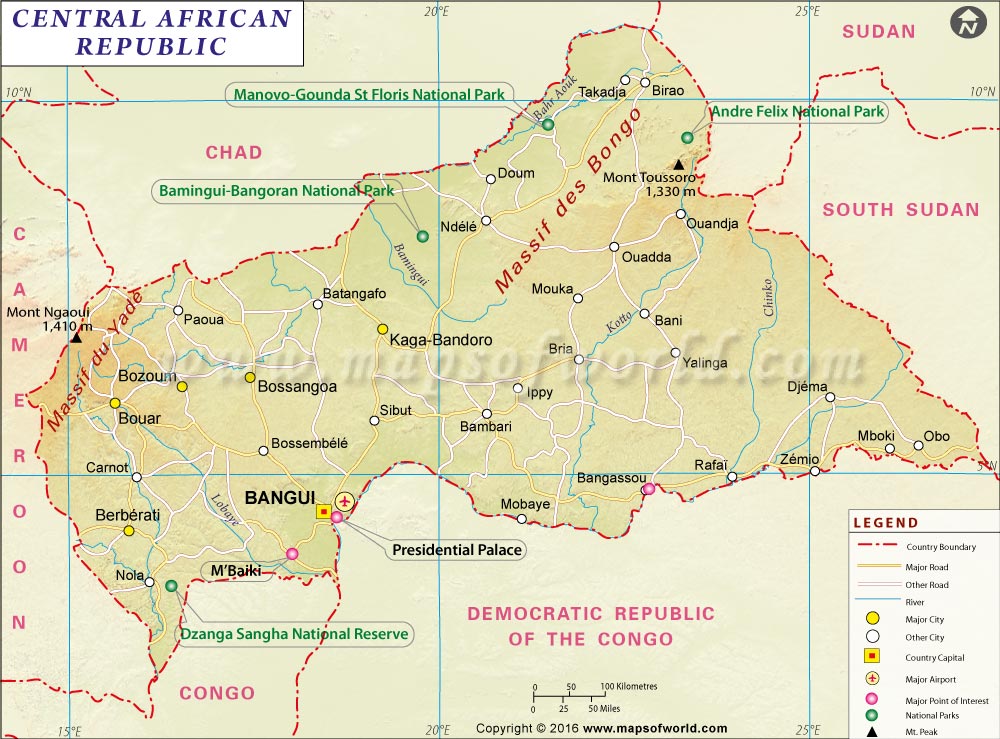 At the height of the slave trade, people from the region were captured and traded as slaves across the continent. By 1875, the region was controlled by the sultanate of Sudan along with much of the nearby territory.

Explorers and traders from Europe arrived around 1885, beginning with those from France, Germany, and Belgium. The French soon controlled the Congo Free State along the banks of the Oubangui River, and in 1894, expanded the French control to include the region of Oubangui-Chari, where modern-day Central African Republic is situated. This new territory was united with Chad, Middle Congo, and Gabon to become the Federation of French Equatorial Africa in 1910. At the end of World War II, reforms in France led to independence for French Equatorial Africa. Central African Republic was formed in 1958, and in 1960 it became a fully independent country. After it gained independence, the Central African Republic went through conflicts, including a series of coups, as recent as 2013. Conflicts in the early part of the year led to a coup d’etat and the president fled, leaving the rebel leader as the interim president.

The Central African Republic, as its name suggests, is located in the heart of Africa, and is entirely landlocked by the six countries it borders. The country is situated in the Ubangi and Chari River basins. Its borders are marked by the many rivers and tributaries that flow along them, including the Congo, Mbomou, Uele, Ubangi, and Sangha Rivers.

Much of the terrain of the Central African Republic is characterized by low savannas, with hilly regions in the northeast and southwest. The highest point in the country is the peak of Mont Ngaoui, which stands 1,420 meters (4659 feet) above sea level. Some of the land area is covered in rainforests, the most dense parts located in the southern part of the country, while the north is mostly desert.

Central African Republic has a few outdoor recreational destinations of note. The first of these is Manovo-Gounda St. Floris National Park, which is home to many important African species, including black rhinos, elephants, cheetahs, gazelles, and more. However, poachers destroyed much of the wildlife, and the park was designated a UNESCO World Heritage Site in an effort to preserve the habitats.

Another park is the Dzanga Sangha National Reserve, which contains Central African Republic’s rainforests and is home to gorillas, buffalo, varieties of hogs, and chimpanzees.

The capital, Bangui, is home to government buildings and monuments, and the country’s largest market, as well as nightlife. There are also French influences from the colonial period and the French people who continue to live in the city.

Transportation in the Central African Republic is limited. There are international buses from Chad and some boat transportation on the rivers along the borders. The border to Cameroon is currently closed. There are roads between Bangui to the important sites in Central African Republic, including Dzanga Sangha, and there are cars for rent in some areas. Some car rentals include drivers. Four-wheel drive vehicles are recommended, as the roads are not often paved and conditions can be difficult.