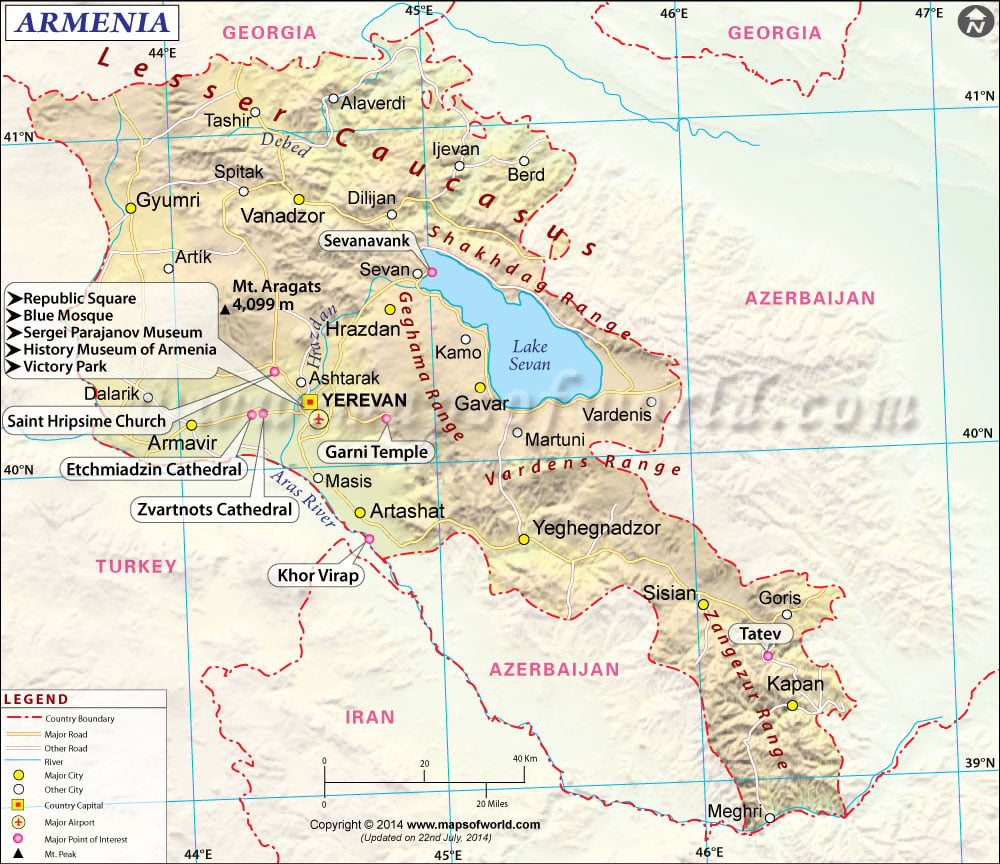 Explore this Armenia map to learn everything you want to know about this country. Learn about Armenia location on the world map, official symbol, flag, geography, climate, postal/area/zip codes, time zones, etc. Check out Armenia history, significant states, provinces/districts, & cities, most popular travel destinations and attractions, the capital city’s location, facts and trivia, and many more.

Armenia, a former Soviet republic, is highly urbanized and most of the people live in towns and cities. A landlocked country, Armenia is mountainous in nature with very fertile soil and extensive irrigation. Beautiful waterfalls are a common scenic feature in Armenia.

The country of Armenia is located in Southwestern Asia, east of Turkey.

Armenia occupies about 29,800 sq km of the northeastern portion of the Armenian Highland, which is filled with mountains, forests and fast flowing rivers. The country is bordered by Georgia on the north, Azerbaijan on the east, Iran on the south, and Turkey on the west.

The climate of Armenia is mainly dry and continental in nature with dry hot summers and moderately cold winters.

The Flag of Armenia is made up of three equal horizontal bands – red at the top, blue in the middle and orange at the bottom.

Flora And Fauna of Armenia

Armenia has varied plant life – in low-elevated plateau regions, drought-resistant plants are a common feature while the higher-elevated regions are filled with grass. The forests of Armenia in the extreme northeast and southeast comprise of beach and oak trees. Wild boars, jackals, lynx, and Syrian bears make up the fauna of Armenia.

As history goes, Armenia was inhabited by people who had settled in Mount Arafat, the present day Turkey, around 3000 BC. Later in the early 19th century, Russian advanced into Caucasia. By the late 1820s the Russian Empire had gained control of Iran’s territories in Transcaucasia, including the Armenia of today, some of whose portion remained as part of the Ottoman Empire. This led to a large number of Armenians subsequently migrating from the Ottoman Empire to Russian-held territory. Towards the end of 19th century, many Armenian political groups mushroomed and agitations for greater levels of autonomy for Armenians began to catch on.

Later, during World War I, in the year 1916, Russia managed to conquer greater parts of the Ottoman-held Armenian lands. However, after the Bolsheviks seized power in Russia during the Russian Revolution of 1917, the Ottomans reoccupied their lost territories. In December 1920, Armenian nationalists entered a political agreement with the Bolsheviks, forming a new coalition government that then proclaimed Armenia a socialist republic. In early 1921 the Bolsheviksv took complete control of the government, expelling the Armenian nationalists, then Armenia was incorporated into the Transcaucasian Soviet Federated Socialist Republic (SFSR) in March 1922. In December, the SFSR became one of the four original republics of the Bolsheviks’ new state, the Union of Soviet Socialist Republics (USSR).

In a move to quell nationalist sentiment, the new Soviet Communist regime outlawed ARF in 1923. Leaders of the Armenian Church were persecuted, churches were closed, and church property was confiscated.

In the mid-1980s Soviet leader Mikhail Gorbachev introduced glasnost (Russian for “openness”), a reformist policy that allowed controversial issues to be discussed publicly for the first time in Soviet history. Armenians took advantage of glasnost to demonstrate against environmental problems in their republic.

Later in December 1988, northern Armenia was devastated by an earthquake that killed 25,000 people and left more than 400,000 homeless. The government relief efforts did nothing much to ease their hardships. In late 1989, the Armenian Supreme Soviet (legislature) declared Nagorno-Karabakh to be part of Armenia. However, the Soviet authorities did not support the declaration, saying it was unconstitutional. The USSR officially ceased to exist in December 1989.

Economic conditions in Armenia deteriorated rapidly in 1992. To add to woes, the Azerbaijan’s economic blockade of Armenia, which closed both a railway link and a fuel pipeline, caused severe food and energy shortages throughout Armenia. In 1993 Armenian forces defeated the Azerbaijani army in several confrontations in Nagorno-Karabakh, which led to Armenian control of the region and of adjacent areas by August of that year. In July 1995, Armenia held its first parliamentary elections as an independent country. The Republican bloc, a coalition led by the PNM, won a decisive victory to claim the majority of seats.

In March 1997, Ter-Petrossian appointed the elected president of Nagorno-Karabakh, Robert Kocharian, as the prime minister of Armenia. Later Kocharian was elected by popular vote to succeed Ter-Petrossian after campaigning on a promise to reach a peaceful resolution in the Nagorno-Karabakh dispute, but it remained unsolved despite high- level talks.

Armenia has a rich cultural heritage and is famous for age-old decorative stone carvings that are practiced even today. Other forms of Armenia art include rug weaving and metalwork. Coming to music and dance, Armenia is famous for Opera and ballet, in fact, national dance companies and orchestras tour throughout the country performing and entertaining the people.

After a series of hardships the country was subjected to, Armenia is slowly treading the recovery path. First, it was a devastating earthquakein 1988 that took away over thousands of lives and rendered so many homeless, then it was the prolonged war in Nagorno-Karabakh that also involved Armenia. The war led to blockades of trade routes, which in turn led to shortage of food and other amenities.

Under the Soviet central planning, Armenia had developed an industrial base like supplying machine tools, textiles, and other manufactured goods to sister republics in exchange for raw materials and energy. But all these industries were dependent on other Soviet states and highly suffered the trade-route-blockades and other calamities, which led many factories to shut down. The gross domestic product fell by 60 percent between 1991 and 1993.

But in 1995, inflation, which had increased the price of goods by as much as 20 fold a year, was under control and the GDP was again growing. In 2001 the GDP was an estimated $2.1 billion. In fact, Armenia’s skilled workforce is considered an advantageous tool for the progress of the Armenia economy. While the agricultural sector has long-term needs for more investment and updated technology, the privatization of industry has been at a slower pace, though it is being given renewed emphasis by the current administration.