What is the North Atlantic Treaty? - Answers 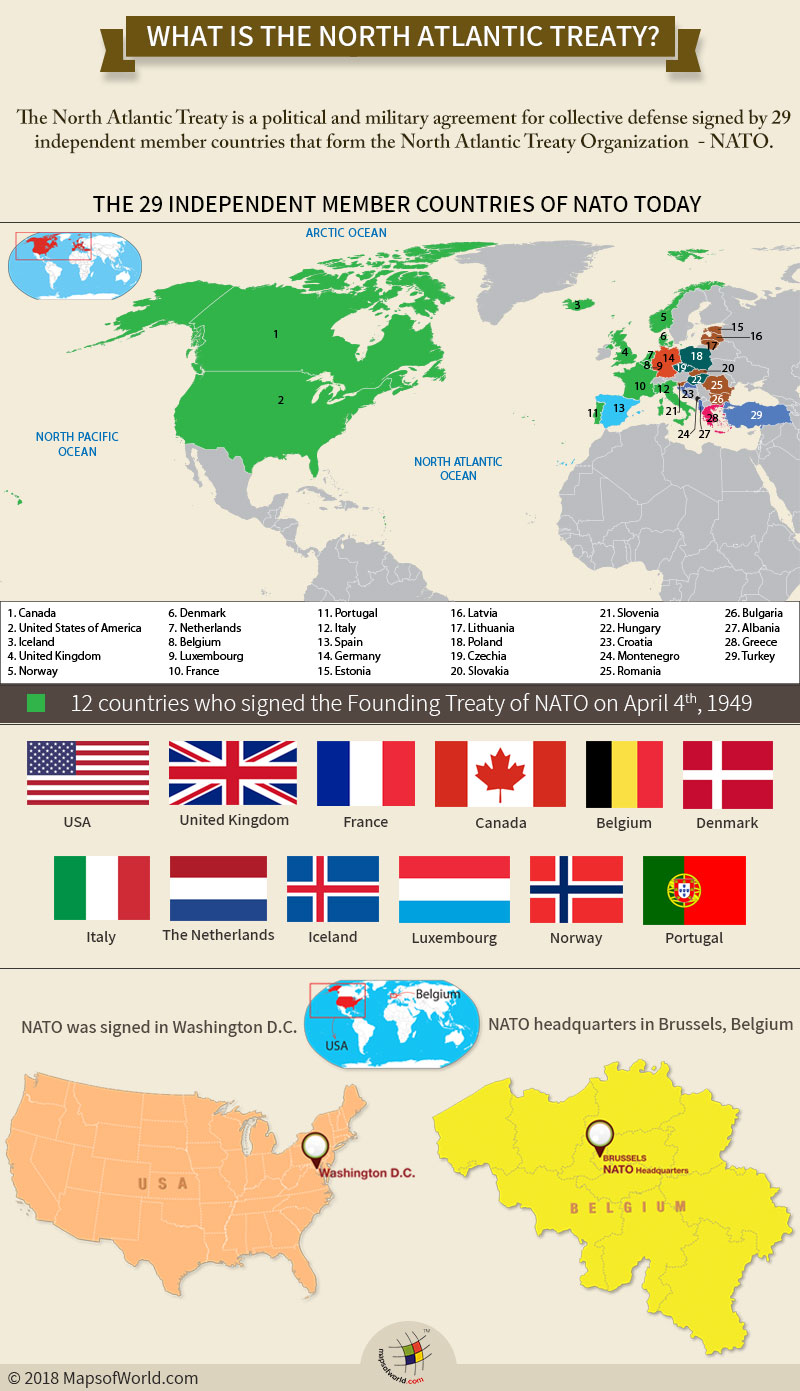 Who were the founding signatories to the North Atlantic Treaty?

Representatives of twelve countries signed the founding treaty in English and French in Washington D.C., USA.

Why was the North Atlantic treaty necessary?

As World War II ended in 1945, much of Europe was in ruins, and its economy destroyed. Many countries needed urgent large-scale aid to begin reconstruction and rehabilitation.

The fall of Nazi Germany saw the rise of Communist ideology espoused by the Soviet Union in Europe and later in China. The Russian army controlled large parts of East Germany while the U.S. and allied forces held the western side. Tensions began to mount between the two sides on how Germany would be administered.

Meanwhile, there was rising political instability in Greece and Turkey. Between 1946 and 1949, Greece was in a state of civil war fought between Communists backed by Albania, Yugoslavia and Bulgaria, and the Greek Army that was supported by the US and UK. The Communists in Italy saw an opportunity in the aftermath of World War II as the Monarchy there came to an end in 1946 and emerged as the second largest political party.

The Soviet Union had already begun to expand its influence across Eastern Europe. In 1948, the Soviet Red Army implemented a blockade of West Berlin, which was under U.S. and allied control. In 1949, Soviet-backed Communist party in Czechoslovakia took control of the government. In 1945, China was facing a civil war between the Communists led by Mao Zedong and the ruling Nationalist Party.

Europe faced two major challenges; reconstruction and revival of its economy, and the rise of Communism that threatened democratic governments. Most democratic countries of Europe looked towards the United States to step up its assistance on both counts – civil and military aid and protection against Soviet expansion.

To prevent the further economic collapse of Europe and to check Communist expansion, the U.S. Secretary of State George C. Marshall proposed in 1947 a comprehensive plan for the reconstruction of Europe. This plan became known as the Marshall Plan. The U.S. Congress passed the Economic Cooperation Pact in March 1948 that cleared the way for funding the reconstruction of Western Europe. The amount would eventually reach $12 billion.

The Soviet Union had the opportunity to join the Marshall Plan but declined over suspicion of US influence over its East European allies.

The Signing of the Treaty of Brussels, 1948

As a consequence of Nazi Germany’s aggression during World War II and the subsequent rise of Soviet Russia, Western European nations began discussions for collective defense. They proposed to pledge if any country of the alliance were attacked, all other members would join to fight in defense of that nation. Great Britain, France, The Netherlands, Luxembourg, and Belgium, signed the Treaty of Brussels on March 17, 1948, pledging mutual defense.

These countries wanted a commitment to mutual defense, and they wanted the United States to join the treaty. The Truman Administration was hesitant to commit since it could only enter a war with the approval from Congress.

In May 1948, the US Congress passed the Vandenburg Resolution authorizing negotiations with Western powers to discuss the possibility of an alliance outside the United Nations Security Council, since the Soviet Union had veto powers in it. Also, the US wanted to expand the membership to include Canada, Denmark, Portugal, Ireland, Norway, and Iceland, since it gave military access from opposite sides of the Atlantic.

It led to the signing of the North Atlantic Treaty, also known as the Washington Treaty, in April 1949.

Where is NATO headquartered?

NATO has its headquarters in Brussels, Belgium and its present Secretary General is Jens Stoltenberg. The headquarters of the Allied Command Operations is at Mons, Belgium.

What does Article 5 of the Washington Treaty state?

NATO was established with two objectives;

Political: to provide a platform for discussing mutual security and defense-related issues, build trust and cooperation among member countries, and to prevent future conflict.

Military: It allows for military intervention for crisis management if all diplomatic options are exhausted. The concept of mutual defense is assured under Article 5 of the Washington Treaty and guarantees the territorial integrity of member countries. For the first and only time, Article 5 was invoked in response to the 9/11 attack in the U.S. in 2001.

Visit the following to learn more about NATO: