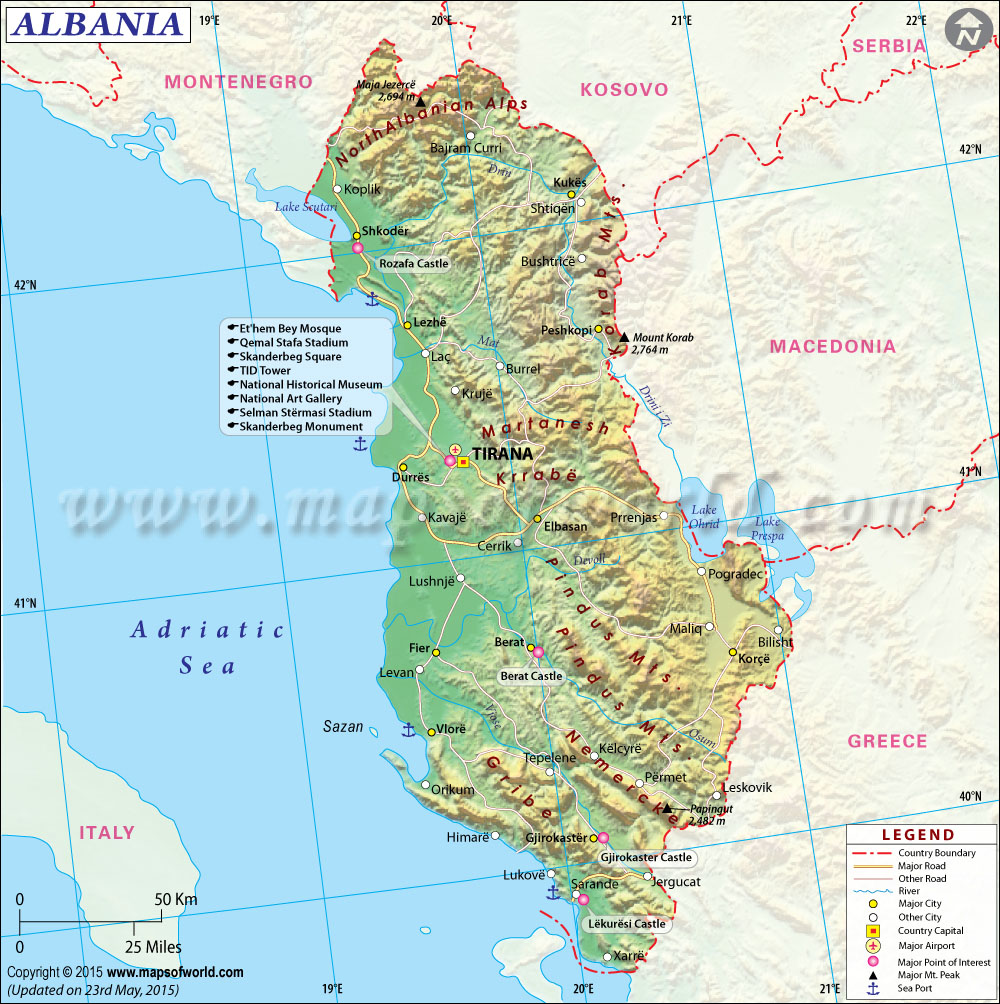 Explore this Albania map to learn everything you want to know about this country. Learn about Albania location on the world map, official symbol, flag, geography, climate, postal/area/zip codes, time zones, etc. Check out Albania history, significant states, provinces/districts, & cities, most popular travel destinations and attractions, the capital city’s location, facts and trivia, and many more.

Albania is a small nation of 11,100 sq miles in southeastern Europe bordered by the Adriatic and Ionian Seas. Macedonia, Greece, Kosovo, Serbia, and Montenegro share boundaries with Albania. Its geographical co-ordinates are 41 00 N and 20 00 E. Albania enjoys a Mediterranean climate in the lowlands whereas highlands are cold and experience snowfall from November to March.

Albania traces its ancestry to the ancient Illyrians. The recent discovery of Stone Age and Early Iron Age artifacts suggest that the Albanian landscape has been inhabited since 229 BC. It was ruled by Greeks, Romans, and later by the Macedonians. The Byzantines occupied and held it till 7th century AD. The name Albania was suggested by Ptolemy for a string of principalities constantly raided by Visigoths, Ostrogoths and Huns. Albania was a highly developed urban center till its Ottoman occupation in 1388. They were finally overthrown by the efforts of Skanderbeg in1443. The Turks returned after his death and committed more atrocities on the people destroying its art and culture. The Turks isolated Albania from Western Europe which continued till the time of Enver Hoxha. The Albanian struggle for freedom continued till the Turks surrendered in 1912. Freedom saw the advent of Communism in Albania under Hoxha. He ruled Albania on the lines of Stalin and strengthened the country’s isolation. General people finally denounced Hoxha’s specters and initiated popular elections in 1992. The first general elections were won by the Democratic Party. Since then Albania has never looked back. Numerous economic, social, and cultural reforms are in place to aid unrestricted progress. Albania’s free market reforms are constantly attracting foreign investors. It has also applied for a merger into the European Union on April 28, 2009.

Albania is primarily an agrarian economy relying heavily on agro-based industries like food processing, fisheries, livestock etc. More than 45% of population utilizes 24% of the land for agriculture. It contributes 19% to the nation’s GDP. The country has vast deposits of oil, natural gas, bauxite, iron ore, and copper awaiting appropriate use. Industries have grown at a pace of 3% in the last few years. Albania earns $1.548 billion through exports to Italy, Greece, and China. The rising petroleum prices in the world market have aided in 38% growth of revenue from exports. The GDP per capita income has risen to $4000 and is expected to reach $8800. Tourism contributes substantial part to the country’s GDP. The unemployment rate in Albania is 30%. In 2006 it signed a Stabilization and Association Agreement as the first step for integration to the European Union. The free market reforms have lured many corporate giants to invest in Albania like Australia Drillsearch, Gustavson Associaltes LLC, Vodafone, Enel and so on.

Tennis was recognized as the national sport of Albania in 1996. Traditional sports of Albania are mostly pastoral in nature like archery, horse racing, and wrestling. Football is the most popular sport in Albania and the national team is currently ranked 84th by FIFA. Albania also plays basketball, volleyball, swimming, gymnastics, and weightlifting at the international level. There are also ample opportunities for water sports like windsurfing, canoeing and rafting. Albania actively participates in the 40 Bunarfest of Kosovo and has hoisted Balkan Games in 1946.

Albania follows a parliamentary democracy and multi party system. The dominant political parties of Albania are the Democratic Party and the Socialist Party of Albania. The Constitution of Albania was adopted on November 28, 1998. The Government has three organs namely The Executive, the Legislature, and the Judiciary.

Law and Order in Albania

Albania suffers the menace of organized crime and corruption. Poverty, unemployment, inflation, and underdevelopment can be deemed possible causes for the high crime rates. Human trafficking of women and children for sexual abuse or enforced labor has always been one of the serious concerns. They are trafficked to countries like Italy, Greece, United Kingdom, France, Belgium, Holland, Belgium, Norway, and Germany. However, with new stringent laws in place such crimes have been checked to a great extent.

The Albanian art exhibits features of its erstwhile conquistadors namely Greeks, Romans, and Byzantines. This can be seen in the icon paintings and church architecture. The impact of Islam is evident in religious paintings, miniatures, mosaics, and murals. Albania has produced renowned postmodern artists like Anri Sala, Sislej Xhafa and Helidon Gjergji. The statue of Skanderbeg placed in Tirana is the work of the indigenous sculptor Odishe Paskali. Albania is the home of famed poet Ismail Kadare. Several film festivals are held all the year round but the motion picture and theatre in Albania is largely undeveloped. The public radio and TV broadcaster of Albania is the Radio Televizioni Shqiptar. The National Theater of Albania has produced and enacted world classics and hence is an indelible aspect of art and entertainment.

The people of Albania proudly claim their ancestry to ancient Illyrians. The population is 3,002,859 out of which 70% are Muslims, 20% are Albanian Orthodox Christians and the rest are Roman Catholics. The population is made up of several ethnic groups like Albanians, Greeks, Vlachs, Roma, Serbs, Montenegrins, Macedonians, and Bulgarians.

The predominantly Muslim population of Albania follows the lunar calendar hence the dates of festivals vary each year. Small Bajram and Big Bajram are celebrated ceremoniously by the Albanians. Navruz falling in March and Summer Day celebrated in mid- March. Albanians observe Independence Day on November 28 and the next day is called the Liberation day. Mother Teresa Day is celebrated on October 19 to mark her beatification. In addition to these there are general holidays in Christmas, Easter, Good Friday, and New Year.