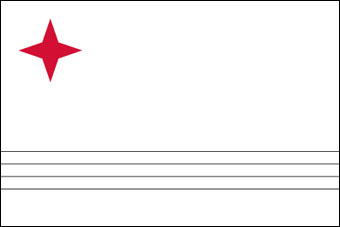 Download Picture of Blank Aruba Flag For Kids to Color

The Aruba Flag was officially adopted in 1976 and since then its design has remained the same. The Aruba Flag has a blue field with two yellow stripes towards the bottom of the flag. There is a white-edged red star at the top left corner near the hoist side of the flag of Aruba.

The Aruban flag has a rich symbolism in the use of the images and the colors in it.

The red star on the Aruba Flag represents the four points of the compass that in turn is symbolic of the people of various nationalities who have come and settled in Aruba.

The white border around the star represents the sandy stretches that surround Aruba on all sides.

The yellow stripes are a representation of the island’s movement towards being a separate self-governing member of the Kingdom of Netherlands. They also stand for the mineral wealth of the land that brought in prosperity to the islanders in the 19th century. The flag of Aruba represents the ties, hopes and desires of the Aruban people. The ratio of the flag is 2:3.