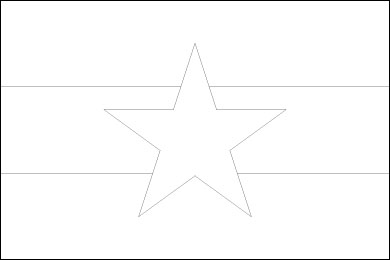 Download Picture of Blank Myanmar Flag For Kids to Color

The white stars on the dark blue portion of the flag signify the fourteen states of Myanmar which surrounds the pinion and the ears of rice.

The pinion, which consists of fourteen cogs, stands for the work force that forms the majority of the people in Myanmar.

The two ears of paddy consisting of thirty-four grains symbolize the peasants. The cog-wheel is symbolic of industry and the rice plant represents farming.

The Myanmar flag consists of three colors, of which, the red signifies valor and certainty, white stands for transparency and good worth, and dark blue represents honesty.

Where is Myanmar Located?