About city Kuala Lumpur, often known as KL is the capital as well as the economic and cultural center of Malaysia. The city has become a symbol of the economic… 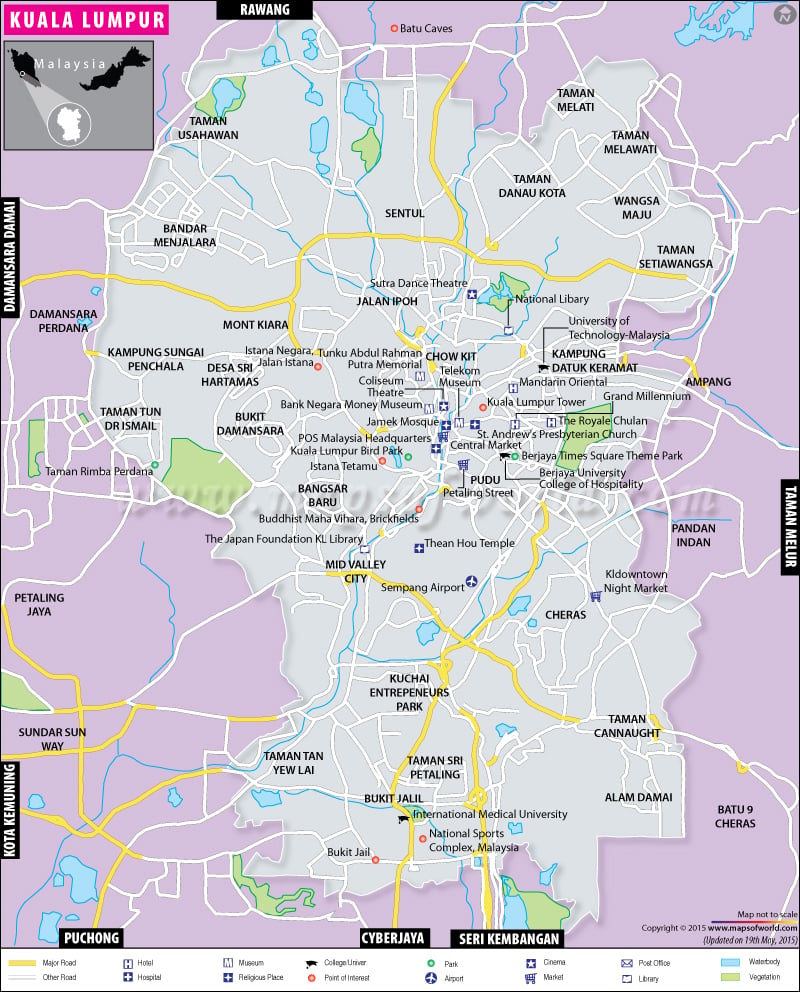 Kuala Lumpur, often known as KL is the capital as well as the economic and cultural center of Malaysia. The city has become a symbol of the economic development of the country and has come a long way from its humble origin. In 1850, the Malay King settled some Chinese laborers here to operate the tin mines of the area. These mines later on developed into a frontier town. In 1881, the town was destroyed by flood and was redeveloped by the British resident, Frank Swettenham. Kuala Lumpur became the capital of the Federated Malay States in 1896. Today, it is the seat of parliament of the country as well as the residence of the constitutional king.

The city covers an area of 243 sq km and has an approximate population of 1.6 million.

Kuala Lumpur is situated about halfway in the middle of the Malay Peninsula at the confluence of Rivers Klang and Gombek. It is located about 35 kms away from the coast. The huge Klang valley is the site on which the city has grown up. This valley is bordered by the Titiwangsa Mountains in the east, the Strait of Malacca on the west and a number of minor ranges on the north and the south. The city is located at an elevation of 21.95 meters.

It has a tropical rainforest type of climate. It remains warm and mostly sunny and the heaviest rainfall is noted between October and March. The city sometimes experiences haze from the dust particles which are carried here from the forest fires in Sumatra.

The transport system of the city is well developed. The easiest way to reach the city is through the Kuala Lumpur International Airport, which is located about 75 kms to the south of the city in Sepang. You can also avail regular flights from here to a number of destinations in Europe and Asia. In addition, there is the Sultan Abul Aziz Shah Airport, which was the main airport earlier and is located much near to the city. However, as of now only few flights are offered from this airport to Indonesia, Singapore, Thailand and some domestic destinations.

As the weather is warm and bright during winters, the best time to visit Kuala Lumpur is in the winter months from December to February. However, the city receives heavy tourist traffic for the summer months as well.

Cultures (fairs and festivals) and traditions

Kuala Lumpur is a highly diverse city. The Chinese laborers, the Malays who migrated here in search of jobs, the Indian migrants and the British colonialists have all contributed towards the creation of this unique city.

Some of the major festivals celebrated in Kuala Lumpur are:

There are a vast number of places to visit in Kuala Lumpur. Some of them are as follows:

The beautiful National monuments, parks, botanical gardens and the vast number of malls and markets are other attractions of Kuala Lumpur.

An ideal vacation is one that offers you the pleasure of an ideal stay, and you’ll have plenty of such options when in Kuala Lumpur The city offers world class accommodation to cater to every budget. The most luxurious hotels include Pacific Regency, Traders Hotel, Prince Hotel & Residence, Mandarin Oriental, Carcosa Seri Negara, Maya, Shangri La, Marriott, Hilton and many more. The three and four star hotels include Piccolo, Radius International, Alpha Genesis, Puteri Park, Swiss Inn, Nova etc. Budget accommodation is provided by a number of non rated hotels and hostels.

Where is Malaysia Located?

Where is Malaysia Located?