About City :  Lilongwe is the capital and the largest city of Malawi. The city is named after the Lilongwe River, on the banks of which it has existed for centuries… 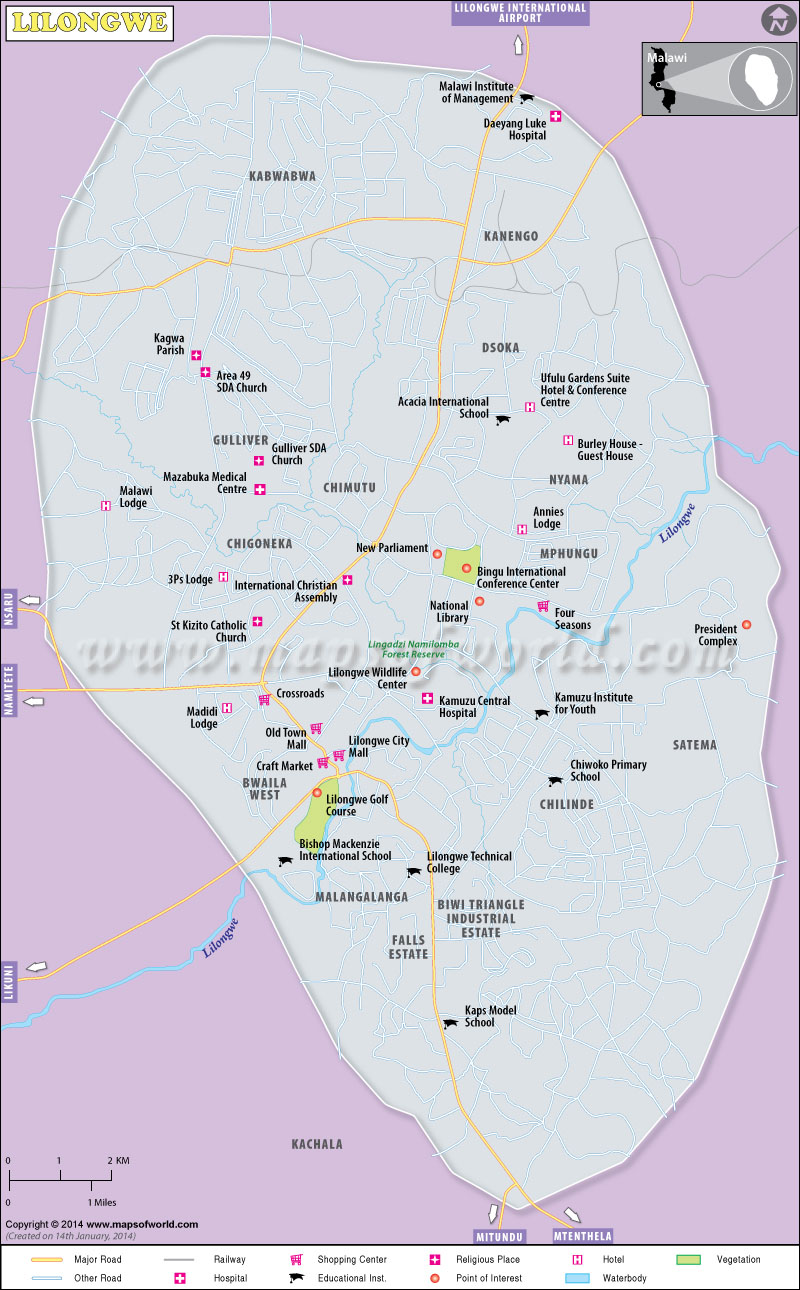 Lilongwe is the capital and the largest city of Malawi. The city is named after the Lilongwe River, on the banks of which it has existed for centuries as a small fishing village. Lilongwe was the British Colonial administrative center in the beginning of the 20th century. It was so chosen due to its desirable location near Lake Malawi and other important commercial cities. After Malawi attained independence in 1964, Zomba initially became the capital until 1974, when Lilongwe succeeded it. This capital city is undoubtedly emerging as the economic capital of the nation, being the processing, selling and buying center of the tobacco industry in Malawi. Lilongwe has seen an unprecedented growth in population, making it the most populous city in 2008. Currently it is home to 902,388 residents. Chichewa is the official language of Malawi, though Chinyanja, Chiyao and Chitumbuka are widely spoken. Christianity is the predominant religion here.

Lilongwe is situated in the center of Malawi and is close to the borders with Zambia and Mozambique. It sits on a plateau at an elevation of 1,050 meters above sea level, on the banks of the river Lilongwe. Spreading over an area of 6,159 sq. km, the city is divided into the Old Town in the south and the New Town in the north with the Lilongwe Nature Sanctuary in between.

Lilongwe is served by the Kamuzu International Airport or Lilongwe International Airport that has regular flights to numerous cities like Johannesburg, Addis Ababa, and Nairobi. Domestic flights to Blantyre are available on Air Malawi and Swiftair. The airport is a 30-40 minutes’ drive from the city and taxis are easily available. Lilongwe can also be reached by buses running from several neighboring cities on the borders.

Taxis and minibuses are available to travel within the city. Minibuses are cheap and give an opportunity to know the locals and the co-passengers.

Lilongwe experiences a humid subtropical climate with warm summers and mild winters. Due to the altitude temperatures are comparatively lower. The best time to visit this city is between May-August, as the temperatures are cooler during these months with less or no rainfall.

Malawi has a rich and fascinating culture owing to the wide range of ethnic tribes residing there. The following are some of the festivals celebrated by the citizens of Lilongwe:

In addition to these, Lilongwe celebrates the various festivals of the Christian calendar with much fervor. Christmas and Easter are especially celebrated in a grand fashion in their own traditional manner.

Lilongwe is a land of natural flora and fauna that can be seen in the numerous reserves and parks.

Accommodation facilities are easily available in various price ranges. Cresta Crossroads Hotel and Capital Hotel are among the best luxury hotels in the area. They offer some of the best modern amenities like a swimming pool, Jacuzzi, fast speed internet and a shopping mall nearby. The Kibko Town Hotel, Korea Garden Lodge and Mufasa Hotel are the more affordable ones present in Lilongwe. If one is looking for an adventurous camping experience, then the two options available are Mabuya Camp and Lilongwe Golf Club.