Kiribati's latitude and longitude is 1° 25' N and 173° 00' E. Below is the map of Kiribati showing major towns, roads, airports with latitudes and longitudes plotted on it. 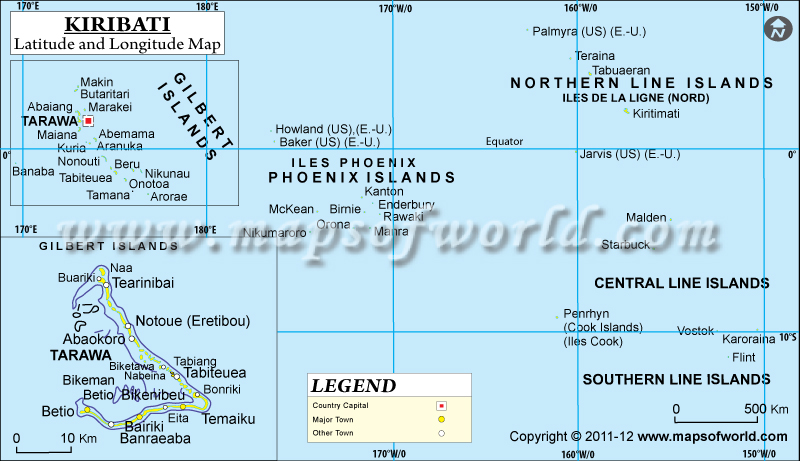 The Republic of Kiribati lies in the Oceania Region with Geographic coordinates of 1°25'N, 173°00'E. Kiribati is known as Ribaberikin Kiribati in the local language Kiribati.
Previously known as the Gilbert Islands, Kiribati was granted independence by the British in 1979. With its geographic location in the Coral Atolls of the Pacific Ocean, Kiribati has one of the smallest land areas within it's extended latitude and longitude , amounting to a total of 726 sq km. The capital of Kiribati is South Tarawa, with the latitude and longitude of 1°28'N, 173°2'E respectively. The population of Kiribati is estimated at 107,817 and the majority of them are Micronesian in origin.

The geographic coordinates of Kiribati include the group of 33 low lying Coral Atolls, the main areas are Banaba, Gilbert Islands, Line Islands and Phoenix Islands. The climate is distinctly marine. The summers especially are quite warm and humid. The unusual latitude and longitude of Kiribati also makes the area prone to typhoons. In the period from November to March, there are high winds and tornadoes in the region.