Fiji's latitude and longitude is 18° 00' S and 175 ° 00' E . Below is the map of Fiji showing major towns, roads, airports with latitudes and longitudes plotted on it. 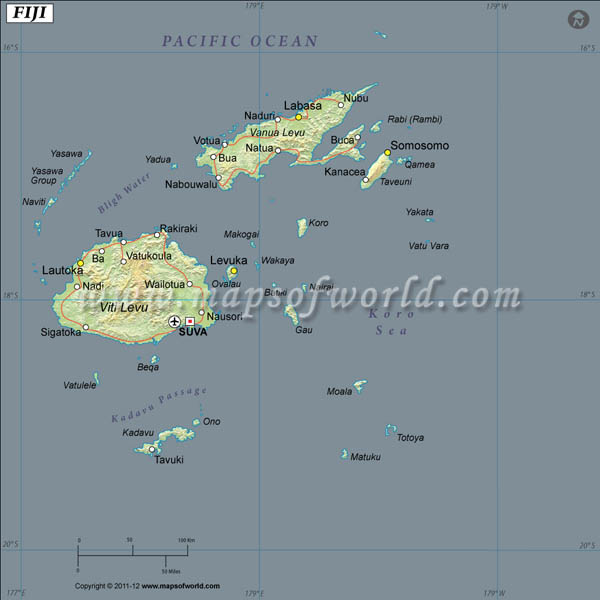 The Latitude and Longitude of Fiji is 18°00'S and 175°00'E respectively. The island nation of the Republic of Fiji is located on the South Pacific Ocean. Fiji means Island in the Tongan dialect. The 322 islands of Fiji's Archipelago constitute an area of 18,270 sq km across Fiji's latitude and longitude. The largest islands are Viti Levu and Vanua Levu. Suva, the most important city of Fiji has a Latitude and Longitude of 18°6'S and 178°30'E respectively.

Fiji has a rugged mountainous terrain built on lava deposits.

The weather is typically tropical and changes in temperatures across the seasons are minimal, however there are possibilities of cyclonic storms in the period from November to January.

The population of Fiji is made up of several ethnic groups; Indians, Tongans, Samoans, Rotumans, Polynesians and Melanesians. The total population stands at 918,675 according to the most recent census.