Kenya Africa Map illustrates the surrounding countries, 7 provinces' boundaries with their capitals, and the national capital. 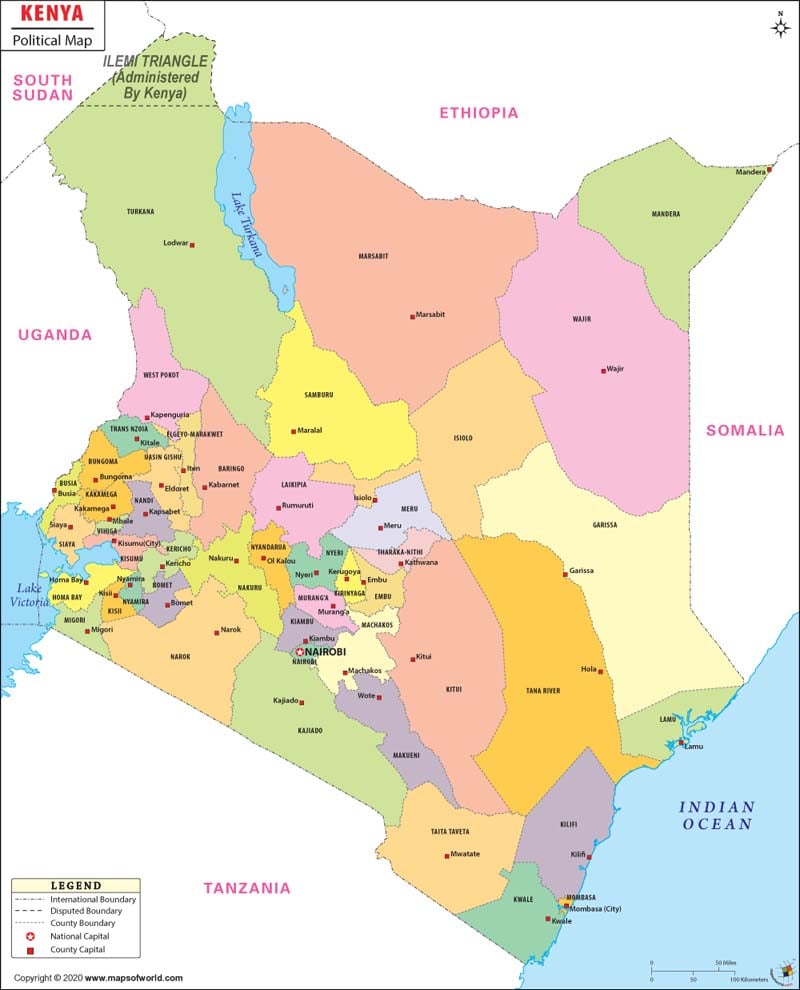 View the accurate and latest Kenya political map on this page. Kenya is located in East Africa. The country attained independence from the United Kingdom on 12th December 1963. The legal system of Kenya is based on English and Kenyan common law, statutory law of Kenya, Islamic law, and tribal law. The president of Kenya is both chief of the state and head of the government.

Political Kenya Map
Kenya is an eastern African country, where English is the official language. The geographic coordinates of Kenya are 1º North latitude and 38º East longitude. The total area of Kenya is 582, 650 sq km. The population of the country as per the estimate of July 2007 was 36,913,721. In the political map of Kenya, the internal and international boundaries; province capitals, the national capital, and some of the major cities have been marked by using specific symbols.

Kenya Capital
The capital of Kenya is   Nairobi. Kenya’s capital is situated along the geographical coordinates 1° 16′ 60″ South latitude and 36° 49′ East longitude. Nairobi is located at an altitude of 5672 above sea level. The national capital of Kenya has been pointed out in the printable Kenya map by using a red square with a black outline. In the eastern African region, Nairobi has a maximum population. The city is also the center of culture and business. The city is served by Jomo Kenyatta International Airport. Most of the media and news organizations in Kenya are located in Nairobi. Some of the cities that lie in close proximity to Nairobi are:

The provinces of Kenya have been marked in the printable map of Kenya by using various colors and the provincial boundaries are also indicated on the map by using a specific pattern of black lines.

The cities of Kenya have been marked on the printable political map as black dots. Some of the major cities on the map of Kenya are:

Kenya Boundaries
The countries that border Kenya are Uganda on the western side, Somalia on the east, Ethiopia on the north, Sudan on the northwestern part, and Tanzania on the southern side. The Indian Ocean is in the eastern portion of the country and Lake Victoria lies in the west of Kenya. The international boundary of the country has been indicated in the   Kenya information map by black lines.

Kenya travel has been in vogue among tourists to Africa for several decades. If you are planning to travel to Africa   African Kenya is a place worth visiting. Desert safaris, national park safaris, mountain trekking, etc. are integral parts of   Kenya tours.   Kenya safari is famous for the wealth of geographical features that one comes across in this country.

Mapsofworld.com also offers maps of all countries and important cities of the world, including, a Mombasa -Kenya map, a Road map of   Kenya, a South Africa map, a travel map of different regions, in addition to a flag map of all countries.

Where is Kenya Located

Where is Kenya Located