Introduction to Dublin The capital of the Republic of Ireland, Dublin is located along the Liffey River and is known as the black pool for the river’s deep black waters.… 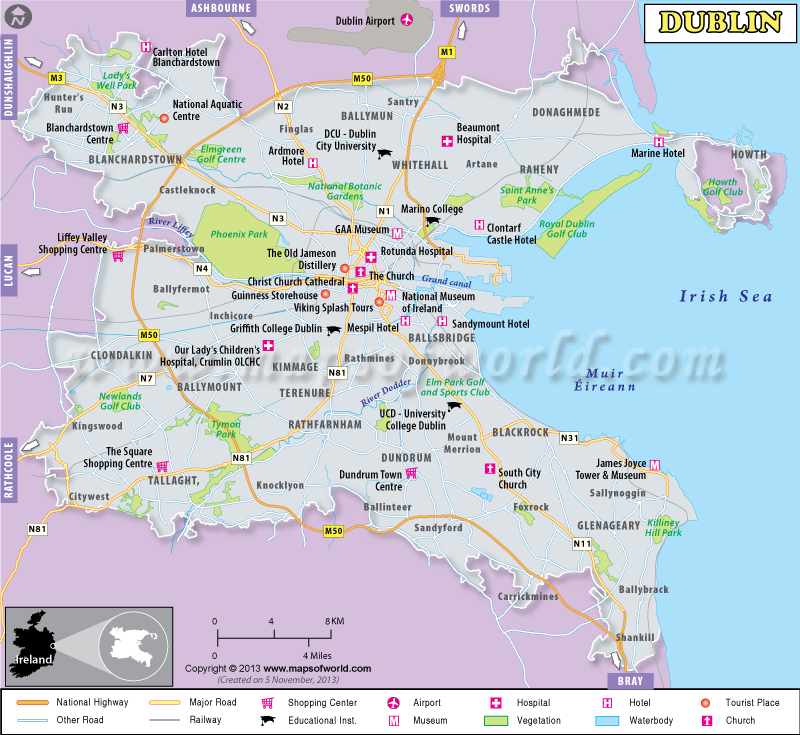 The capital of the Republic of Ireland, Dublin is located along the Liffey River and is known as the black pool for the river’s deep black waters. Following the partition of Ireland in 1922, Dublin became the capital of the Irish Republic.

The earliest known inhabitants of the Dublin region were the Eblana Civitas who lived here in 140 AD. By the early 9th century, Dublin had become an established Viking settlement – a reputation it was unable to outgrow despite many attempts at freedom. The Norman invasion of 1169 brought an end to a long Viking reign. In 1171 King Henry II of England invaded Dublin and went on to become Lord of Ireland. Later in 1204, Dublin became a part of the British territory till the Republic of Ireland gained independence in 1922.
Dublin was greatly affected by the Great Plague of 1348. Another devastating plague attack between 1649 and 1652 wiped out most of the city’s population. The 18th century witnessed the greatest period of architectural development in the city, which held on to its medieval character despite the flourishing of the Georgian culture in England.
Historically, Dublin has prospered as a result of trade with England and the rest of Europe. The city went into a state of static decline in the 19th century with Westminster taking its place as the seat of the administration. Dublin was later at the center of the Irish War of Independence. Since 1997 Dublin has experienced a period of rapid growth and expansion. Today Dublin is rated an Alpha Grade city.

There are several ways of reaching the city :

Dublin enjoys a maritime climate where summers are cool and winters mild. Usually, the sunniest months are June and May, while the wettest month is October. February is the driest of all months, while rainfall is distributed evenly all through the year.

Dublin is a city straight out of the post cards. It is one of the most beautiful cities of Europe. Life runs at a slower pace and the Irish love to spend time socializing over beer in their taverns. Visitors are likely to fall in love with the beauty and elegance of Dublin. Sightseeing in the city can begin with a visit to Dublin City Hall. The City Hall was built between 1769 and 1779 and was a financial center during that period. It was then referred to as the Royal Exchange. Only in 1851, was the building was taken over by the Dublin Corporation and became the City Hall. The entrance to the building features a beautiful dome known as the Rotunda. Twelve columns support the dome with a mural between each pair of columns. This is a beautiful structure that showcases the rich architecture of Ireland. Abbey Theatre is a not–to-miss attraction. The theatre, true to its heritage, now stages plays from the Irish repertoire. Old classics from the European and world theatres and new plays are also showcased here.

Ireland is the land of ancient castles. For almost 800 years, the Malahide Castle has been a beautiful castle-fortress and the private residence of the Talbot family. Since the last Talbot died in 1973 the castle has been turned into a public museum. The art and sculpture collection in this castle is both valuable and beautiful. Only a visit to the Dublinia can give you the first-hand experience of the history of this city and the way of life during the medieval period. Dublinia is a unique experience that offers visitors a peek into the life of the city as it was many hundreds of years ago.

Another place to feature on a Dublin itinerary is the Dublin Castle. One of the most visited attractions of Dublin, the castle was built in 1204 by King John on the banks of River Liffey, and it served as a fortress to guard the city. It is a beautiful Gaelic structure, worth a visit. Dalkey Castle & Heritage Center is another old castle, famous for its historical performances. Do not miss the tower house, and the church built in the 10th century.

The Bram Stoker’s Dracula experience is a showcased in a special museum that takes visitors on a heart-pounding journey through the ‘Time Tunnel to Transylvania’, a visit to Dracula’s Castle, the Blood Laboratory, and Dracula’s Lair. This museum is not for the faint-hearted, though.

Don’t forget to pay a visit to the Guinness Storehouse, home to the history of the world-famous Guinness Beer. Visitors can learn how Irish beer has ruled the world beer market over the years.

Dublin offers a unique shopping experience. Shopping in the city is centered on two main streets: Grafton Street and Stephen’s Green to the south side and Henry Street to the north. Separated by the river, the north and south sides are a few minutes’ walk from each other. Grafton Street is located between Trinity College and St Stephen’s Green and houses the shops of many designer brands. Dublin’s south side shopping must include a visit to the famous jewelry shop called Weir’s. Other major shopping streets in the area include Wicklow Street, Dawson Street and South Great Georges Street. The Powerscout Towncentre and the George’s Street Arcade are the two most popular shopping malls. On the north side Henry Street, ILAC Shopping Mall, & Jervis Street Shopping Center are major attractions.

The outdoor food market, Moore Street, is a great place to catch a bite. Dublin is one of Europe’s most vibrant cities, and boasts a brilliant nightlife throughout the week, but the excitement brims over with the onset of the weekend, of course. A few popular nightclubs are Alchemy, Club M, LilliesBordello, Buck Whaley’s, and Howl At The Moon. Tripod is Dublin’s largest night club and can accommodate more than 1,300 people on a single night. There are more than 100 famous taverns in Dublin. A few of the best are Cobblestone Pub, Church Bar & Restaurant, Cafe en Seine, Fitzsimons Hotel Temple Bar, The Morgan Hotel & the Bull and Castle Hotel.