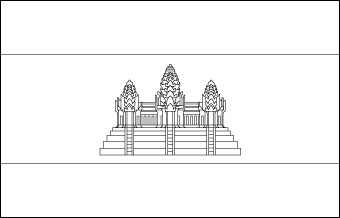 Download Picture of Cambodia Flag Outline for kids to color

The Cambodia flag is a blend of red and blue with an image of Angkor Vat placed at the center of it. The flag was officially adopted in 1993. It was originally adopted on October 29, 1948 and remained until October 1970.

Angkor Vat, a Hindu temple, an integral and significant part of the rich heritage of Cambodia proudly adorns the country flag. The blue color symbolizes the nation’s royalty. The red represents the nation and the white represents the religion. The emblem of the temple represents the structure of the universe.

Where is Cambodia Located?

Where is Cambodia Located?