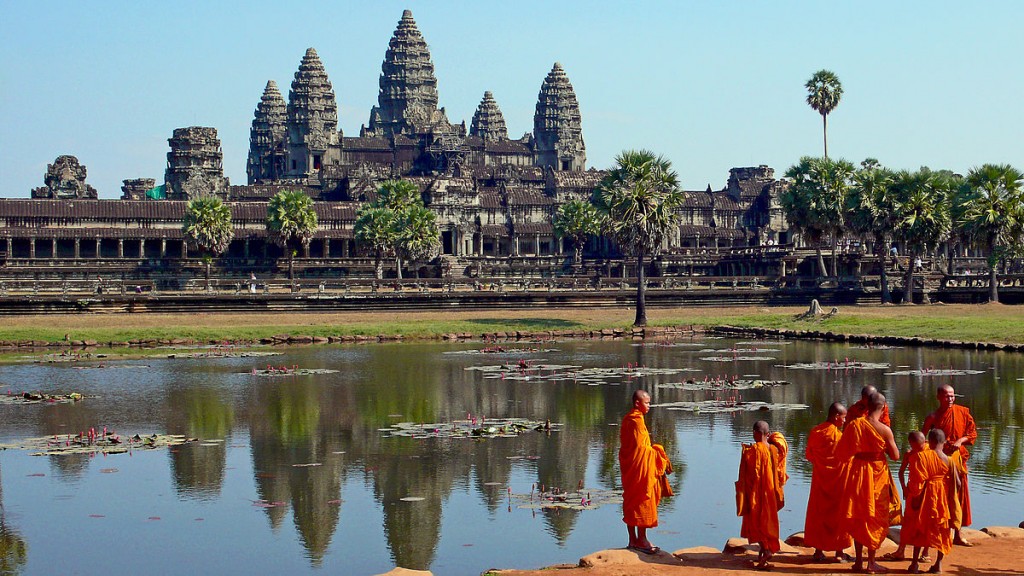 Siem Reap is a natural and cultural wonderland

Located in the Northwest province of Cambodia, Siem Reap is a natural and cultural wonderland that mesmerizes thousands of tourists each year. It has beautiful green landscapes, beautiful flora and fauna, rustic villages, and stunning ruins of an empire long gone. However, don’t visit the city expecting a sleepy town waiting to be discovered. Siem Reap is a proper tourist destination with stylish hotels, numerous shopping plazas,top-of-the-line dining options and more.

Angkor Wat: There are only few places in the world that will leave you as spellbound as Angkor Wat. Built back in the 12th Century, Angkor Wat is the top tourist attraction in all of Cambodia and it is easy to see why. The massive complex has some of the best preserved examples of Southeast Asian Khmer architecture whose symmetry is absolutely unbelievable. Towards the latter half of the 12th Century, the complex was transformed from a Hindu place of worship into a Buddhist place of worship which it still is. The entire complex is surrounded by a wide moat that takes its majesty a notch higher.

Angkor Thom: While Angkor Wat may be the most popular tourist destination in Cambodia, Angkor Thom isn’t too far behind. While the former was a temple, the latter is an entire complex with formidable walls and a deep moat to ward off attacks. The highlights of the entire structure are the gate towers that have giant carved faces on each side that look out over the landscape.

War Museum: While Cambodia does have a rich history, not all of it is nice. The last three decades of the 20th Century were embroiled in a bitter conflict between the Cambodian Army, the Khmer Rouge, and the Vietnamese Army. The museum contains exhibits that detail Cambodia’s ‘war years’ as well as a collection of war machines like the T-34 tank, MiG-19 jet fighter, Mil-Mi-8 helicopter, D-44 field artillery and scores of landmines, all of which are obviously deactivated. Tourists can also avail such free guides from those who actually participated in the war. To listen to and hearsuch personal tales from guides actually adds another depth to the museum visit. Visitors can also hold deactivated M-16 and AK-47 rifles along with rocket launchers and automatic machine guns.

Angkor National Museum: A visit to the Angkor National Museum is a must for any history buff. The museum contains an exquisite collection of artifacts that date back to the Khmer Empire. The briefing hall in the museum has a large theater where tourists are welcome to sit back and learn more about the museum, amenities, and the exhibitions. There are seven separate galleries that showcase various aspects of the Khmer Empire as well as an exclusive gallery dedicated to Lord Buddha with numerous statues depicting the enlightened one.

Old Market: Also known as Psah Chas, the large open air market is a shopper’s delight and a bargain hunter’s dream. The market caters locals as well as tourists.Not only will visitors find souvenirs and other trinkets, but also some scrumptious local staples like sausages, fish, different varieties of rice, and many more.

The Gloria Angkor Hotel and Angkor Spirit Palace offer excellent value to budget travelers. Mid-range travelers should definitely check out the Tara Angkor Hotel and the Saem Siemreap Hotel. The Shinta Mani Club Siem Reap and The Privilege Floor @Borei Angkor should be ideal for those looking to splurge.

Where is Siem Reap?

Siem Reap is the capital of the Siem Reap Province in northwestern Cambodia.

The Siem Reap International Airport is the main airport of the city.

Siem Reap is well connected to nearby cities by buses.

The period between December and February is considered the best time to visit Siem Reap as the temperature is mild and the skies are clear of rain.

What are the main languages spoken in Cambodia?

While Khmer is the official language of Cambodia, English and French are also spoken.

The temperature usually goes more than 30° C all though the year. The city has a long wet season that starts in April and ends in November.