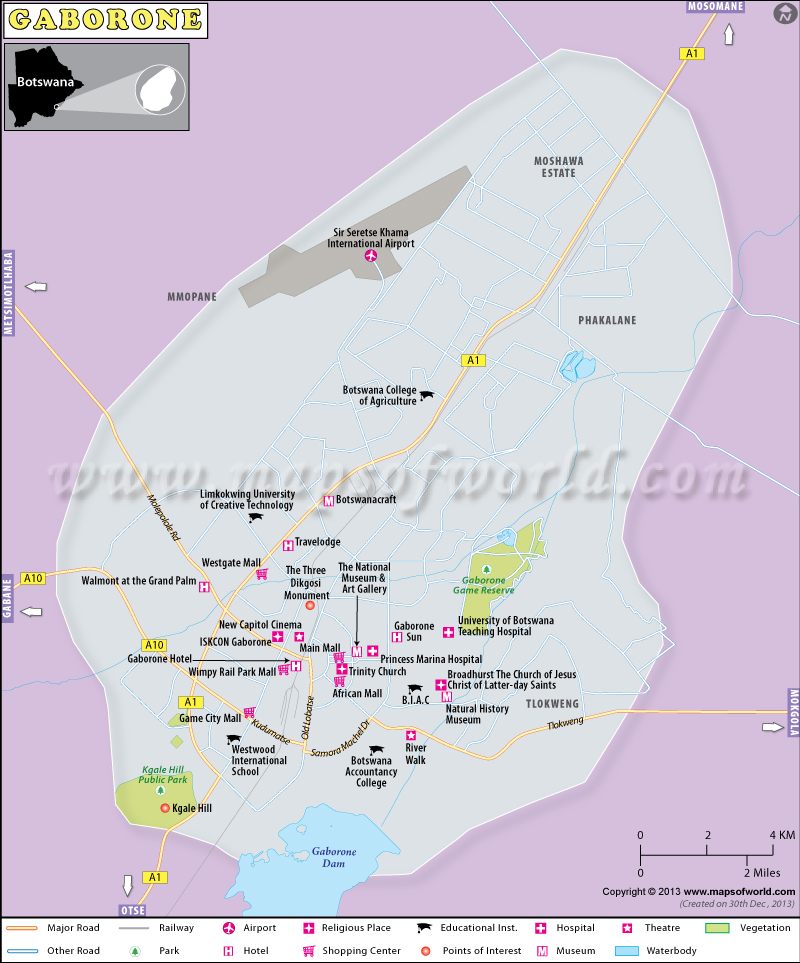 Gaborone is the capital and the largest city of Botswana. It is an administrative district besides being the capital of the surrounding South East District. The history of this city dates back to the 1880s when Kgosi Gaborone left Magaliesberg to settle in the area. The early European settlers called the city Gaberones, though at present the locals often refer to it as Gabs. In 1966 Gaborone became the capital of Botswana after the country gained its independence from the colonial rule of the English. This city was chosen due to its proximity to a source of fresh water, and also because of its experience as an administrative center.

Gaborone is controlled by both a local government known as the Gaborone Town Council and by the national government of Botswana. It is a fast-growing city with a current population of around 250,000. Setswana is the prevalent language spoken here with English as the main language used for business. Gaborone is home to a mixed population comprising of Roman Catholics, Muslims, and Hindus.

Gaborone is located between Oodi and Kgale Hills, on the Notwane River in the south-eastern part of Botswana. Stretching over an area of 169 sq. km, the city is about 15 kilometers away from the South African border. It lies at an elevation of 1,010 meters above sea level. In the center of the city lies the Mall which is currently the administrative and financial center of Gaborone.

Gaborone is served by the Sir Seretse Khama International Airport and can be flown in from various cities with airline services like Air Botswana, South African Express, and Air Namibia. There is also a daily bus plying between Pretoria, South Africa, and Gaborone. The railway facility has been stopped since 2009 throughout Botswana.

Once in the city, the easiest way to travel is by availing of a shared taxi or by booking a cab. Combis (mini-buses), cars, and buses are the other options available.

The city experiences a hot semi-arid climate. The best time to visit Gaborone is in July-August when the temperatures are comparatively lower with little rainfall and calmer winds.

A land of diverse cultures, Botswana’s traditional festivals draw tourists from all over the world to the fascinating displays of African music and dance. Check travel destinations to know more about the place.

Apart from these traditional festivals, Gaborone celebrates Christmas and New Year’s Day with much pomp and splendor throughout the city.

The following are the sites that must be visited in Gaborone :

Sufficient accommodation facilities are available in Gaborone within various price ranges. The Tsodilo Lodge and The Mogoditshane Tent are the best among the budget hotels. There are also several hotels that offer excellent services at an affordable price, like African Home, Linville, and Luxury Lodge, to name a few. Among the luxury hotels, Landsmore Masa Square and Grand Palm are undoubtedly the best that offer five-star facilities. Besides these, apartments are also available for longer stays, namely the Motheo Apartment, Innisfree Apartment, and the Hantom House.