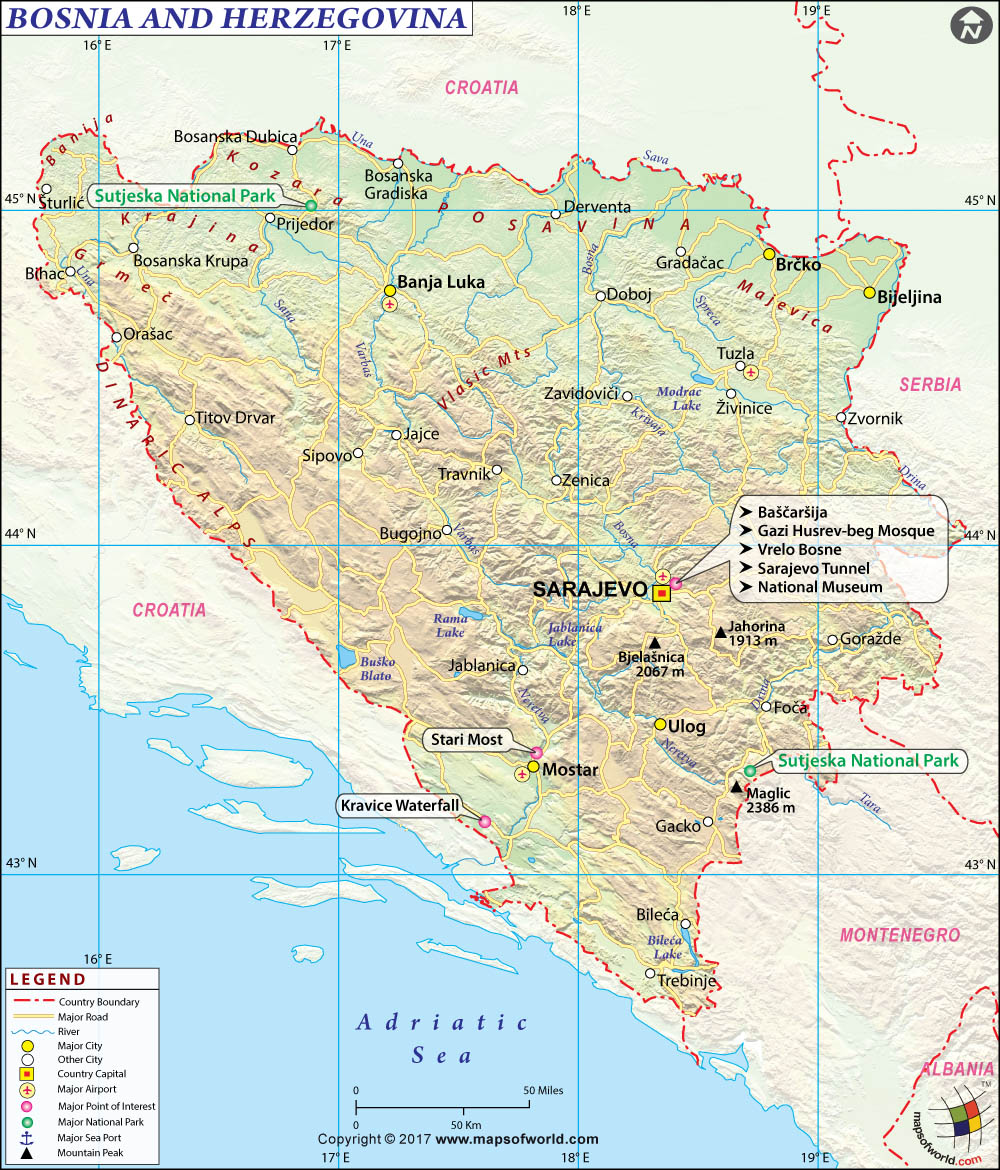 Explore this Bosnia map to learn everything you want to know about this country. Learn about Italy’s location on the world map, official symbol, flag, geography, climate, postal/area/zip codes, time zones, etc. Check out Bosnia history, significant states, provinces/districts, & cities, most popular travel destinations and attractions, the capital city’s location, facts and trivia, and many more.

Bosnia and Herzegovina, also known as Bosnia, was initially a Republic of former Yugoslavia.The country passed a referendum for independence on 3 March 1992, when a Serb republic was formed in Serb-concentrated areas of Bosnia.

The Serb opposition to the referendum was soon followed by violent clashes where thousands lost their lives. These conflicts finally came to an end only in February 1996, the year which also saw the capital Sarajevo being united after remaining divided for four years.

Bosnia is a mountainous country, where the extensions of the Dinaric Alps, bordering Bosnia in the west, pass through the western and southern parts of the country. The highest peak is Mount Maglic, measuring 7,831 ft, along the border with Serbia and Montenegro. The northern part of Bosnia is made up of mainly forests, while the southern part has fertile soil. The country’s principal rivers include the Bosna, the Sava, which flows along the northern frontier, and the Sava’s tributaries, the Una, Drina, and Vrbas. Only a few rivers, notably the Neretva, flow toward the Adriatic Sea, where Bosnia has 20 km of coastline.

The country is bound on the north and west by Croatia and on the east and south by the republic of Serbia and Montenegro.

The flag of Bosnia consists of a wide medium blue vertical band on the fly side with a yellow isosceles triangle abutting the band and the top of the flag; the remainder of the flag is medium blue with seven full five-pointed white stars and two half stars top and bottom along the hypotenuse of the triangle.

While the south of Bosnia has a Mediterranean climate, with sunny, warm summers and mild, rainy winters, the north experiences continental climate made up of warm summers and cold winters. At higher elevations, short, cool summers and long, severe winters with snow are common.

Flora And Fauna of Bosnia & Herzegovina

Bosnia has no majority in a single ethnic group, in fact, the 1991 census showed that the country is made up of 44 percent of Muslims, 31 percent of Serbs, 17 percent of Croats, 6 percent of Yugoslavs (people of mixed Muslim, Serb, and Croat ancestry), and 2 percent of others.

Bosnia also has a small number of Roma (Gypsies) as well as a small section of Jews. Until independence, most of the people were urbanized, following a well-standard life style while the lesser well-off stayed in rural areas. But the war and the subsequent crash of economy have resulted in a drop in the standard of living and have seen many former working-women being confined to homes as mothers and housewives.

The country has a rich and wonderful cultural heritage, where epic stories recited in the form of songs is famous through out Bosnia. The country is also famous for its love songs which have been used to express love over the centuries.

As Bosnia has rich natural resources, the economy is mainly governed by mining, forestry, agriculture, and some sectors of light and heavy manufacturing, notably of armaments. But the country had to pay a high price for war in terms of a shattering economy whose recovery is slowly picking up only now. Though the country exported specialty agricultural products, such as fruit and tobacco, it had to import staples, including more than half its food.