What are the popular places to visit in Tarsus, Turkey? - Answers

Tarsus is a historically significant city located in south-central Turkey, 20 km (12 miles) inland from the Mediterranean Sea. The city’s history stretches back to more than 6,000 years as is evident by the Gözlükule, a tumulus in the city where artifacts dating back to the Neolithic period were found. Here the most famous lovers in history, Mark Anthony, and Cleopatra first met. Tarsus is also the birthplace of St. Paul the Apostle, which makes it a religiously important site, too.

Tarsus is located in the Mersin province of the south-central part of Turkey. It is a part of the Adana-Mersin Metropolitan Area. 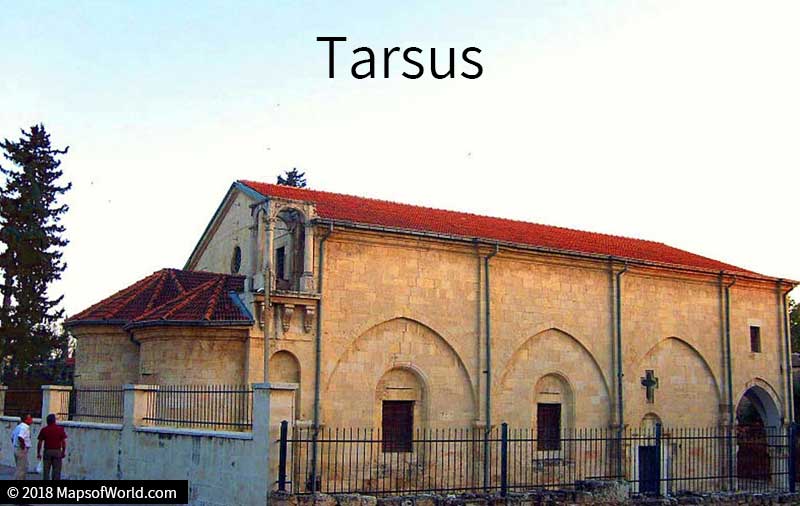 Places to visit in Tarsus

Grand Mosque of Tarsus: Also known as Tarsus Grand Mosque, this mosque was built in 1579 during the reign of the Ottoman Empire. It is said that there used to be an older mosque at the location that was built during the Abbasid (Arab) rule in the ninth century. However, the old mosque was converted into a church when Tarsus was invaded by the Byzantine Empire. But it was again converted into a mosque when the city was retaken by Ramazanoğlu in the 15th century. As an entrance to this grand mosque, a large marble portico, supported with marble columns, greets you. The interior of the mosque is decorated with monumental columns connected with Iranian arches and courtyards. The pulpit and the niche (directed to Mecca) are made of marble. There are also two minarets of which one was converted into a clock tower in 1895. There are also tombs at the mosque of Al-Ma’mun, the Abbasid caliph; Danyal, a holy person; and Seth, who is believed to be the son of Adam.

Cleopatra’s Gate: Also known as Kleopatra Kapisi, Cleopatra’s Gate is the only surviving gate from the Hellenistic-Roman city. Suffered badly from the ravages of the past, this gate is named after Queen Cleopatra VII of Egypt. It is said to have been the place from where Cleopatra, who sailed up the Cydnus disguised as Aphrodite, entered the city in 41 BC to meet with Mark Anthony for the first time and discuss an alliance.

Tarsus Museum: Containing artifacts that were recovered from the excavations at Gözlükule and old districts of the city, the museum exhibits an intriguing trove of Tarsus’ rich history. Housed in a 16th-century medrese (theological seminary), the museum contains ancient statuary, an exquisite collection of 28,176 coins from the sixth century BC up to the Ottoman Empire, and 5,186 archaeological objects. Tourists can also check out ethnographic artifacts about Tarsus’ Turkmen culture as well as various stamps and six manuscripts detailing the history of the land.

St. Paul’s Church: The building date of the Saint Paul Church is said to have been 1102, however, the present dome-less basilica structure was built in 1862. Though the church is no longer in active use, some ceremonies are held here for pilgrims. The ceiling of the church has five frescos with Jesus Christ in the middle and four authors of the gospel, Matthew, Mark, Luke, and John, around him. The sides of the central nave window depict angels and landscapes. The church is currently on the UNESCO World Heritage Tentative List.

St. Paul’s Well: During the excavations of the old district, remnants of an old house were found along with a well. This house is believed to be the house of St. Paul and Christians who pass by drink the water of the well as they believe it is holy. The remains of the house can be seen through the glass that covers the excavated walls.

Kırkkaşık Bedesten: Also known as the Market of Forty Spoons, the covered market was built in 1579 and is located close to the Grand Mosque. The market was initially constructed to support the Grand Mosque and housed a Koranic school and a kitchen for the poor; however, since 2007, small handicraft shops and cafés have mushroomed here.

Tarsus Waterfall: Though formed on a necropolis, the waterfall is now very popular amongst tourists and locals as it offers a respite from the scorching heat in summer. Amidst the sensual fragrances of jasmines and tranquil water, you can grab a bite at the surrounding restaurants.

Taşkuyu Cave: Unearthed by accident during roadwork in the city, this cave has noteworthy impressive galleries and formations. Impressive examples of column walls, stalagmites, stalactites, and draperies are also there.

Tarsu Alisveris Merkezi: This shopping center serves as a one-stop destination for all your entertainment needs. There are many national and local stores – a great place to buy souvenirs. In addition, there are special children’s entertainment blocks, cinema, restaurants and more.

Eshab-i Kehf Cave Mosque: This impressive mosque is situated next to a show cave, which goes by the same name and is situated at the foothill of quite a small hill. The mosque has a tall minaret with 3 balconies.

Old Tarsus Houses: These old mansions attract plenty of tourists. There will be lots of photo ops here.

Ancient Road: The road was unearthed by chance in a construction pit in the year of 1993. It is believed to be constructed during the period of the Roman Empire. The construction material used is basalt stone. The road was unique in that era as it has been found that underneath the road there was a sewage system.

Attractions nearby Tarsus: Kizkalesi and Cennet-Cehennem are some of the places that are close to Tarsus.

There aren’t many hotels in Tarsus. However, the nearby cities of Adana and Mersin have a lot more to offer in terms of accommodation. If one has to stay in Tarsus, the Konak Efsus is a nice place to stay. Other good options include Elif Hatun Konagi, Osmanli Marco Pasha Hotel, and Makam Hotel.

The best time to visit is spring that lasts from April to mid-June.

By Air: Adana Şakirpaşa Airport is the closest airport to Tarsus which is about 40 km (25 miles) away. A car ride will take about 40 minutes.

By Rail: Yenice Railway Station is the nearest trunk line railway station to Tarsus and is about 20 minutes away by car.

By Road: Tarsus is connected to all the major cities by road.