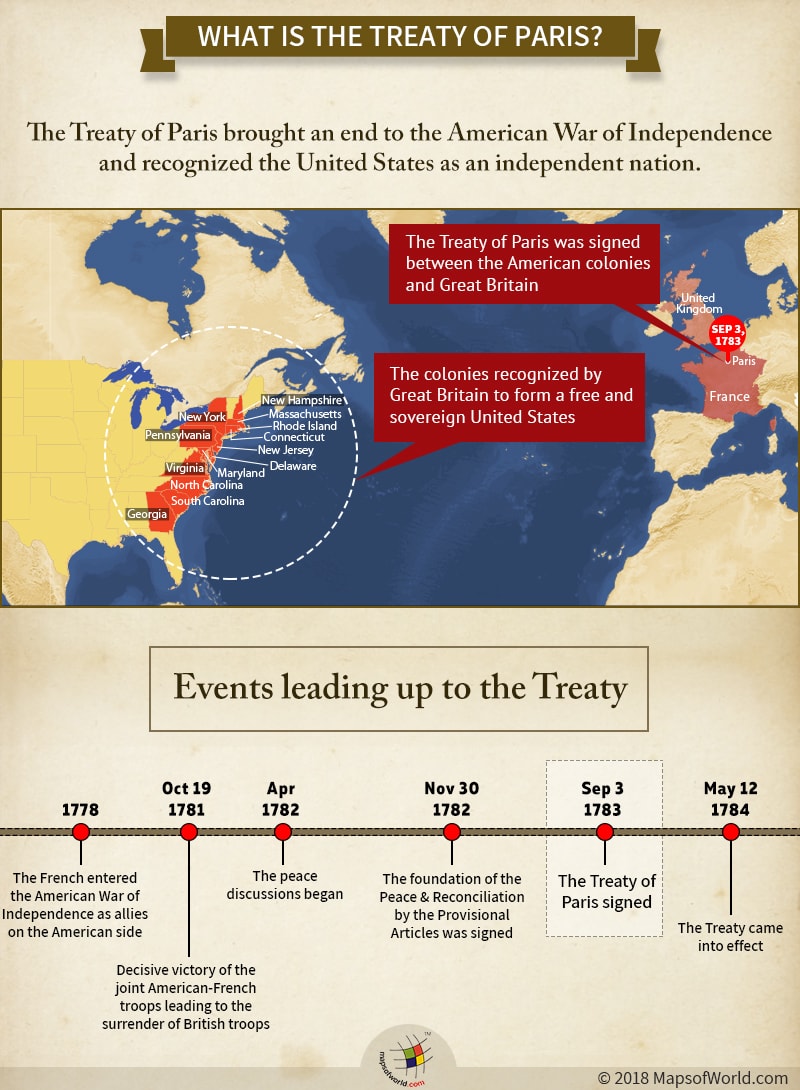 The Treaty of Paris 1783, signed between the American colonies and Great Britain on September 3rd,1783, Paris, brought an end to the American War of Independence and recognized the United States as an independent nation. The Treaty came into effect on May 12th, 1784.

Thomas Jefferson, however, could not undertake the journey and Henry Laurens was taken prisoner by a British warship and was kept at the Tower of London. He joined the negotiations later. The Peace discussions began in April 1782 and were led by John Adams, Benjamin Franklin, and John Jay.

Comte de Vergennes, the French Foreign Minister, represented France in the role of a peace facilitator.

The foundation of the Peace & Reconciliation by the Provisional Articles was signed earlier, on November 30th, 1782. This was included in the final Treaty signed on September 3rd, 1783.

The Treaty of Paris 1783 bears the signatures of:

Highlights of the Treaty
The Treaty defines ten articles:

Article 2nd
The treaty defined the boundaries of the United States. Great Britain ceded all territories between the Allegheny Mountains on the eastern side of Mississippi River. The treaty allowed unrestricted expansion to the West and marked borders to the north, close to the present border with Canada.

Article 3rd
Fishermen from the United States were granted unrestricted fishing rights in the waters of the Grand Banks, the Banks of New Foundland, the Gulf of Saint Lawrence, and in all places of the sea where inhabitants of both countries fished earlier.

Article 4th
The Treaty allowed creditors on both sides, Great Britain and the United States, to have free access to recovery of debts as per law, going forward.

Article 5th
The Congress of the Confederation would recommend to the respective states to return all confiscated properties of the Loyalists who were real British subjects.

Article 6th
It was agreed that there would be no further confiscation of property or prosecution against any person or persons, for taking part in the war for any reason.

Article 7th
All prisoners of war on both sides were to be released; all property including land, buildings, and slaves were to be handed over to the United States; all forces under British command on land and in the sea were to withdraw.

Article 8th
Both countries were granted perpetual access to the Mississippi River for its entire length.

Article 9th
All territories captured by either side after this agreement would be returned without compensation.

Article 10th
Both sides agreed to ratify the treaty within six months of signing it.

Events leading up to the Treaty
In 1778, the French entered the American War of Independence as allies on the American side. French Naval intervention along with their ground forces in support of the Patriot troops under George Washington’s command proved to be effective in the fight against the British Army.

The war had taken a heavy toll on both sides, but it was the decisive victory of the American troops leading to the surrender of British Commander Lord Cornwallis, along with 8,000 British troops, at Yorktown, Virginia, on October 19th, 1781, that finally ended the war in America.

The political consequences were felt in Great Britain. On March 22nd, 1782, the Tory government led by Lord North resigned following the British defeat at Yorktown and was replaced by Whig Lord Rockingham. He was viewed as being sympathetic to the Colonists in America and initiated the Paris Peace talks with them. Unfortunately, he died the same year on July 1st. The then Home Secretary Lord Shelburne took charge as Prime Minister but his government lasted just nine months and was dissolved on April 2nd, 1983.

The political uncertainty in Great Britain through the crucial peace talks in Paris gave the negotiating team of Adams, Franklin, Jay, and Laurens an advantage.

The Comte de Vergennes, as the host facilitator, had his plans for controlling the negotiations. He realized the future value of a strong United States as an ally against the British. Then there was Spain and the Netherlands since both were also involved in the war against Great Britain. He insisted that Great Britain first settle peace with Spain and the Netherlands.

The American negotiators were uncomfortable with Comte’s intentions and were aware that political uncertainty in Great Britain offered them a better opportunity to negotiate directly with the British government in London. They were correct as Great Britain welcomed direct talks.

Great Britain realized the potential of having the United States as an ally for future trade and was keen to weaken the close relationship that France enjoyed with the colonists. The American negotiators were aware of this and entered into some hard bargaining. The final treaty negotiated turned out vastly favorable to the United States.

Visit the following to learn more about the US Colonies and Independence: