What were the first non-native settlements in the United States? - Answers

Click me
Answers » United States » What were the first non-native settlements in the United States?
5 / 5 ( 5 votes ) 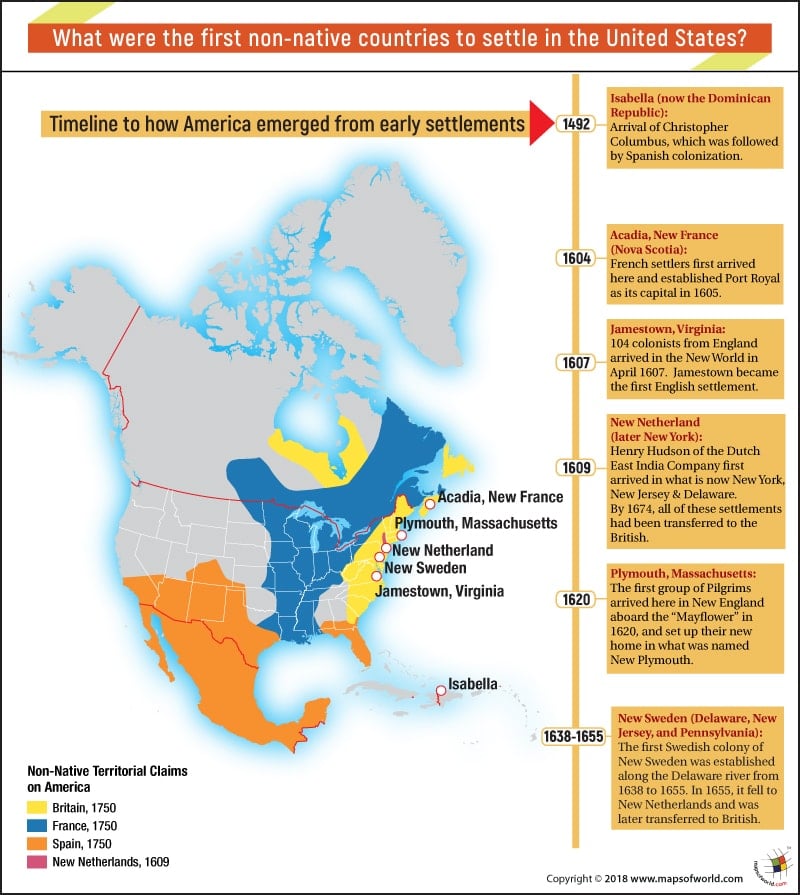 The earliest non-native settlements in the United States can be traced back to the 1600s when the early settlers began making the new land their home. The initial settlers came from Spain and Portugal and were followed by the British.

Initial settlers came to the New Land seeking freedom and a better life. Agriculture was the mainstay of livelihood, followed by trade in basic commodities. As the settlements increased, so did the requirements. The traded goods expanded from essentials to comfort and aesthetics, and as trade began to grow, more settlers began arriving on hearing early stories of success and wealth, and availability of abundant fertile land.

Early settlements that came up in the mid-1600s along the Atlantic coastal areas had the French dominate the north side, the English in the middle areas and the internal areas, and the Spanish towards the south.

Trade in the 1600s and 1700s were mostly around tobacco, sugar, rum, fish, spices, lumber, gold and silver. Slave trade also increased during this period. Beyond trade, as the settlements grew, education, arts, and music began to take early roots. In 1635, the Boston Latin School became the first public supported school. In 1636, Harvard University became the first university in America, established mainly to teach Protestant clergy. In 1693, The College of William & Mary was founded in Virginia. 1701 saw the establishment of Collegiate College – later to be named Yale College.

By the mid-1700s, New York, Boston, Philadelphia, and Charleston would emerge from port towns into bustling cities.

The early settlements were classified into three groups:

Here’s a timeline to how America emerged from early settlements.

Christopher Columbus first arrived in Isabella in 1492, as part of the second voyage to the New World. Life wasn’t easy, as disease and hunger claimed many lives. Santo Domingo followed Isabella as the new Spanish capital in 1496.

French settlers first arrived here in 1604 and established Port-Royal as its capital in 1605. Besides the traders, early settlers included the Jesuits, who arrived as missionaries to establish the Christian order. Early days were full of hardship with diseases like scurvy afflicting early settlers. Later, the British arrived and clashed with the French for territorial control. The British force from Virginia burned down Arcadia in 1613; the town was to witness six colonial wars over its initial seventy-four years.

104 colonists from England arrived in the New World in April 1607, with the hope of a better future. Jamestown was to become the first English settlement. The fact that just 38 people survived that first harsh winter shows the challenges that were awaiting the early settlers.

The winter of 1609-10, saw people starving to death. They ate whatever they could find, and many were ready to return to England. But they continued to arrive as life wasn’t much better back home. They held on, surviving hunger, disease, and attacks from native Indian tribes.

Over 10,000 colonists were to arrive over the next fifteen years, and by 1622, barely twenty percent of the original lot would survive. By 1623, tobacco cultivation emerged as a major cash crop and was to prove a lifeline for Jamestown to emerge as a busy township. Soon slaves from Africa were brought in to work the fields, as the plantation owners grew in wealth.

Henry Hudson of the Dutch East India Company first arrived in 1609 and explored the area as a settlement. The territory claimed provinces of the Republic of the Seven United Netherlands included New York, New Jersey, and Delaware. By 1674, all these provinces transferred to the British.

The first Europeans, known as the Pilgrims, arrived here in New England to settle 37 miles southeast of Boston in what was then named New Plymouth. The early settlers left Plymouth, England in protest against the Church of England and set sail for the New World aboard the ship ‘Mayflower.’ They arrived via Cape Cod on December 21st, 1620, and set up their new home in what was named New Plymouth.

Swedish Traders began moving into both shores of the Delaware River from 1610 onwards, and in 1638 New Sweden was established as a Swedish colony. In 1655, New Sweden fell to the Dutch Republic and became part of New Netherlands. It later was transferred to the British under an agreement.