What countries have the highest death rates due to thyroid cancer? - Answers 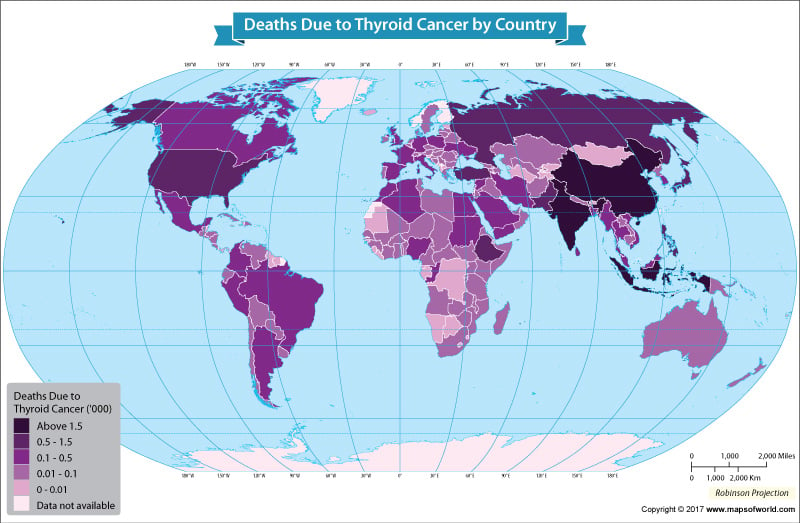 Thyroid cancer is rather uncommon in comparison to other types of cancers. Thyroid cancer can be treated. The disease can be cured with surgery. Advances in science and technology have ensured that few people die from the disease. There are several symptoms associated with thyroid cancer such as a swelling in the neck, pain in the neck and even ears, and problem in swallowing. Other than this, the voice of the person may also become hoarse and he or she may have frequent coughing that may not be connected with a cold.

Despite good treatments, people succumb to the disease. But there is a wide disparity in the figure with some countries recording more than 1,000 deaths from thyroid cancer, while in others the figure ranges less than 10. In some nations, no deaths are reported from this disease.

In the year 2015,  China  witnessed the most deaths from thyroid cancer. According to a World Health Organization data, during the year, 2,864 people died from the disease in the country. India was the second most affected nation in 2015. During the year, 1,753 people succumbed to thyroid cancer. The third most affected nation, Indonesia witnessed 1,658 deaths during the year. Other nations which saw more than 1,000 people dying from the disease were Japan, the  United States, Russia, and Turkey. The Philippines, Pakistan and  Ethiopia  witnessed more than 500 deaths.

Meanwhile, countries such as Kyrgyzstan,  Slovenia, Congo, Mongolia, Albania, Liberia, Kuwait,  Qatar, and many others reported less than 10 people dying from the disease. Countries such as Tonga, Luxembourg, Grenada, Belize, Brunei, and a few others fared even better reporting not even a single death from thyroid cancer.