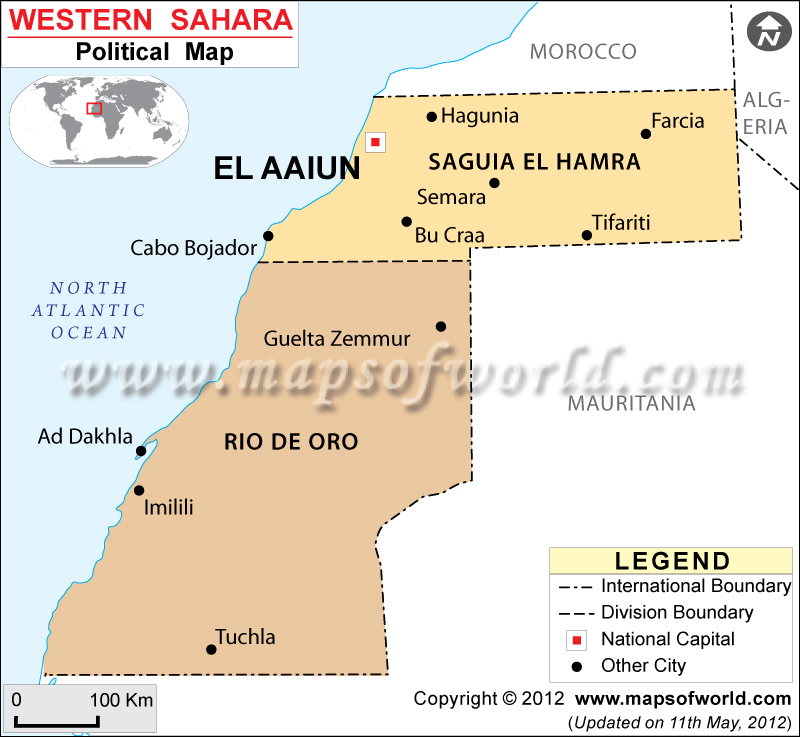 Description : Political map of Western Sahara shows the location of the administrative districts and their capital cities.
0FacebookTwitterPinterestEmail

Western Sahara is a territory located in northwest Africa, situated on the Atlantic coast and bordered by Morocco to the north, Algeria to the west, and Mauritania to the south. Western Sahara has an area of 266,000 square kilometers (103,000 square miles) and an estimated population of over 513,000.

Western Sahara is headquartered in its capital, El Aaiun, where the majority of its population resides.

Western Sahara is a disputed territory, claimed as part of Morocco by the Moroccan government, but declared an autonomous state by the government of its native people, the Sahrawi Arab Democratic Republic. There is continued conflict in the region, but most of the territory is controlled by Morocco, and the rest, is controlled by the Sahrawi Arab Democratic Republic, the Polisario Front. The regions are separated by the Moroccan Wall (Berm) and the part controlled by the SADR, located to the east of the wall, is known as the Free Zone or the Liberated Territories. The parts of Western Sahara that formed Spanish Sahara, the Spanish colony, are Saguia el Hamra in the north, which holds the capital, and Rio de Oro in the south.

Where is Western Sahara