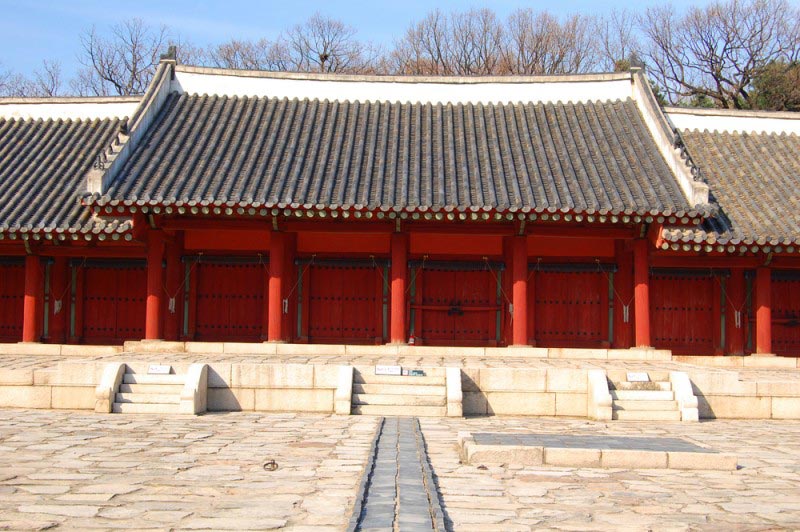 Jongmyo is the oldest Confucian royal shrine, first constructed at the end of the 14th century, and rebuilt in 1601 after it was burned down by the Japanese during war. The restoration was finished in 1608, and has been preserved since then as national treasure of Korea #227, and is a good place to learn about Korean history. The first construction began under the direction of King Lee Seong Gye, who lived from 1335 to 1480, and founded the Joseon dynasty. He was also known as Taejo of Joseon, meaning “great ancestor of Joseon.”

Jongmyo shrine was built as a memorial to the Joseon dynasty (also known as Choson) who ruled for five centuries from 1392 to 1910. The Confucian shrine, which holds tablets containing teachings of the royal family members, and continues to be used to facilitate traditional ancestral worship and rituals.

The original memorial tablets were rescued from the fire, and had been stored in a home nearby for safety. The tablets from 19 kings and 30 of their wives survive today and are housed within the shrine, along with panels listing each of the kings’ accomplishments.

The shrine itself is stoic and austere, its buildings each positioned in a valley, surrounded by a wooded park with small hills. The building is the longest traditional building in Korea, and one of the longest buildings in Asia when it was built. The main hall, Jeongjeon, has seven rooms. King Sejong expanded, building Yeongnyeongjeon, or the Hall of External Comfort.

Three paths lead to the Jongmyo Shrine. The south path is an entrance and exit for the spirits of historical kings past, leading to the place where the mortuary tablets are preserved. The east gate was for the current king, while the west gate was for the prince and performers of the royal ritual. The east and west paths connect in spaces where the prince and king perform ceremonial cleansing and other ritual preparations.

Guided tours of the shrine are available in English, and can really add to the experience and help explain symbolism in the design. The public can only enter the shrine without a tour on Saturdays.

Also Explore: Things to do in Seoul

Where is Jongmyo Shrine?

Jongmyo is located in the capital of the Republic of Korea (South Korea), Seoul. Seoul is served by the Incheon International airport, which is ranked one of the best in the world. The shrine is in Jongno-gu, or the Jongno district, north of the river. The shrine is accessible by subway from the Jongno 3-ga Station.

Confucian rituals are performed at the shrine annually on the first Sunday in May. These ceremonies feature ancient music performed by an orchestra, dances, and scholars who perform the rituals. Autumn, especially late September and early October, is also a good time of the year to visit for the best weather.

The shrine is open 6 days a week – every day except Tuesday. Saturday is the only day it is open to the public. Other days, visitors can view the shrine with a guided tour. English tours depart about four times per day, so plan ahead.