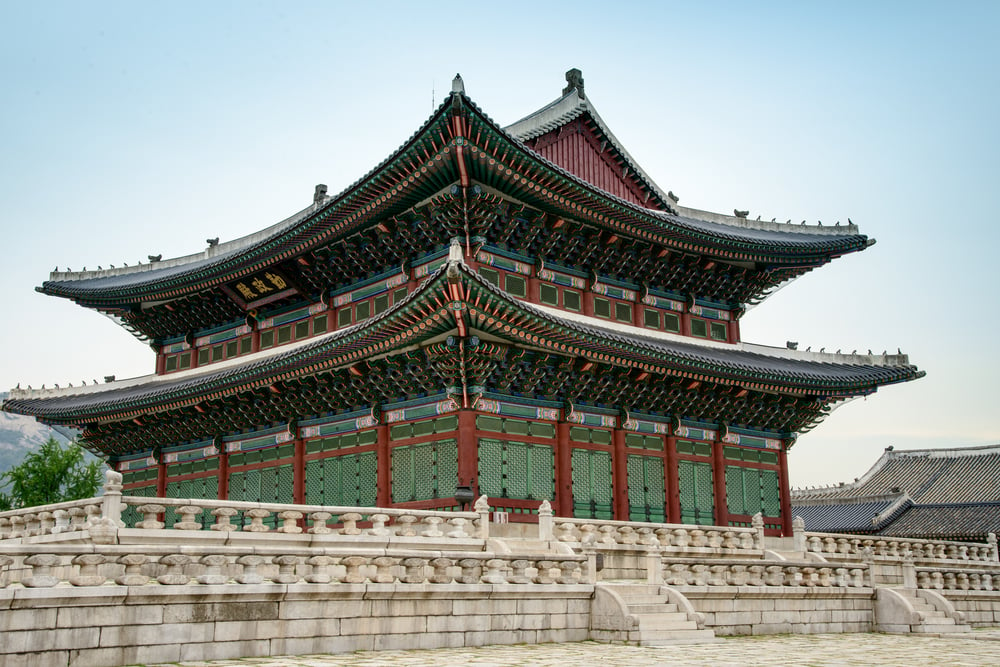 Gyeongbokgung Palace was the first regal castle of the Joseon Dynasty

When King Taejo (Yi Seong-gye) established the Joseon Dynasty, the capital of the new dynasty was shifted from Gaeseong to Seoul and the Gyeongbokgung Palace was built in the center of Seoul. The soothsayer’s predictions suggested that Seoul was the auspicious place for the construction of the Palace. The area in front of the chief entrance “Gwanghwamun Gate” to the palace houses prominent government offices. The gate is a double-roofed marquee placed over three arched entrances. There are east and west gates to the palace, which are closed for entry.

During the Hideyoshi invasions from 1592 to 1598, the palace saw huge destruction. It became a deserted place for following 273 years. In 1867, the palace was renovated on the order of the Prince Regent Heungseon. About 500 buildings were constructed over 40 hectares. The architectural style of the Joseon royal court was mixed with the art form of ancient China. The renovation work to restore the former glory of the palace has been in action since 1990.

The main building of the palace is known as Geunjeongjeon. It was the place where the crowning ceremony was performed, and meetings with foreign emissaries were held. It is also called as the Throne Hall. Incense sticks were burned in the bronze censer placed on the left and the right side of the Hall to indicate the presence of the king for official functions.

The Office Quarters aka Gangnyeongjeon Hall was used by the king to study Chinese classics and to discuss state matters. It was also the king’s sleeping quarter. The Gyotaejeon Hall or the Queen’s Living Quarters were spiflicated three times by fire. The present hall was constructed in 1995. The Jagyeongjeon Hall, residence of Dowager Jo (Queen Sinjeong), King Gojong’s adoptive mother, lies to the east of the Living Quarters.

The Gyeonghoeru Pavilion is a jewel in the crown. Resting over the pond, the Gyeonghoeru Pavilion served as the venue for king’s parties especially conducted for foreign envoys. Donggung, the Crown Prince’s Compound, Taewonjeon Shrine, Geoncheonggung Residence, Hyangwonjeong Pond and Hyangwonjeong Pavilion, Parujeong Hall, Jibokjae Hall, Hyeopgildang Hall, the National Museum of Korea and the National Folk Museum are some other important areas of the Gyeongbokgung Palace.

As the palace is so expansive, an audio tour of the palace is the best way to learn about its history. Free guided tours and audio tours in foreign languages are available. Check out the timings on the official website. 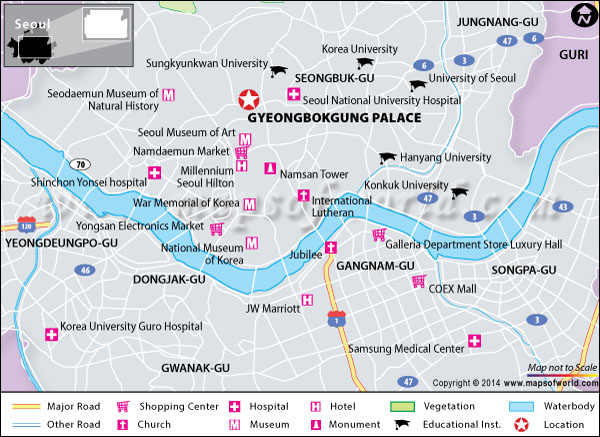 Where is Gyeongbokgung Palace ?

Located in the Jongno District of Central Seoul in South Korea, the Gyeongbokgung Palace can be accessed from the Incheon International Airport within 2 hours and 6 minutes by bus, or within 1 hour and 33 minutes by subway.
Address : 161 Sajik-ro, Jongno-gu, Seoul, South Korea

The palace looks beautiful before dusk.