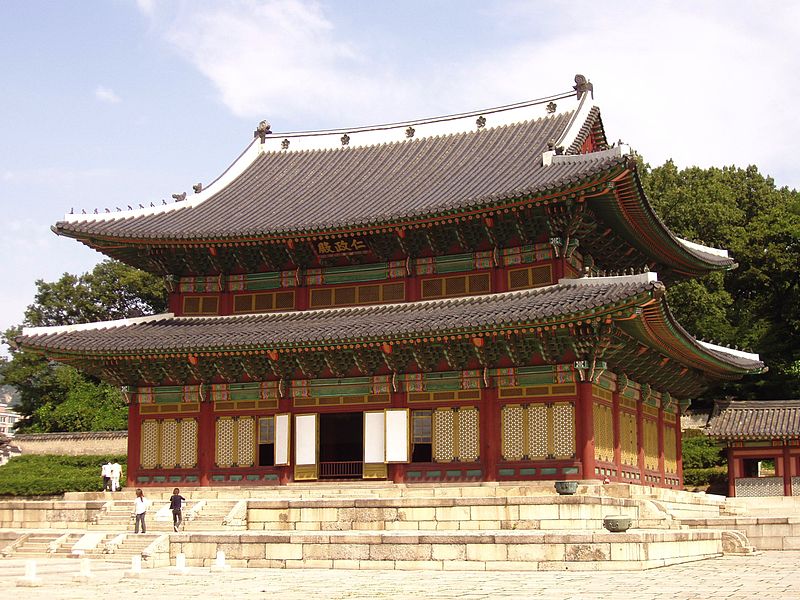 Exterior of the Changdeokgung Palace in Seoul

A two-and-a-half-hour guided tour around the Changdeokgung Palace and its Secret Garden is a beloved sightseeing attraction for every tourist visiting Seoul, South Korea. This over-600-year-old royal establishment has gone through tumultuous times, but has never lost its essence despite the restoration performed on a few of its parts. It is no wonder that UNESCO listed the Changdeokgung Palace Complex as a World Heritage Site in 1997 for its “architecture and design” that merges “harmoniously” with the natural surroundings.

The tour of the Changdeokgung Palace begins with the grand Donhwamun entrance, and leads you through a stone bridge, Geumcheongyo, considered the oldest in the city, with carved mythical animals (haetae) on both sides towards the main palace – the Injeongjeon Hall. The building is made of incredibly ornate wood, and has an interesting interior that uniquely combines traditionally painted ceilings and throne with rather modern curtains and chandeliers lit by electricity. This variance may be attributed to the fact that the palace complex has been home to the royals till 1989, and a number of changes were made to keep the palace maintained and worth living. Next to the palace stand buildings – Seonjeongjeon (with government offices) and Nakseonjae (the royal residence). The entire Changdeokgung Palace tour can be seen in about an hour. The sightseeing does not end here; the best is, in fact, yet to come.

Once you are done with the palace viewing, the tour guide will steer you through a dense forest patch and into what might look like heaven! The Biwon or Huwon or the Secret and Hidden Garden is a 72-acre landscaped plot with a huge, 300-year-old tree, lotus pool, fishing pond, fountains, water streams, and some pavilions. The Yeongyeongdang pavilion has a yangban house that was built as a study place for the prince. The Buyongjeong pavilion was used as a fishing spot, and the Juhapru pavilion housing a library was used extensively by the royalty and courtiers for administrative deliberations. The garden has a stream, Ongnyucheon, surrounding which are five comparatively small pavilions, including Chunguijeong, Soyojeong, and Taegeukjeong. An interesting characteristic of the stream is the Soyoam. It is a big rock, around which is a U-shaped water channel leading to a waterfall. There is an inscription of a Chinese poem on the rock. It is believed that the place was used as inspiration for poetry by the kings and his scholars. This incredible Changdeokgung Palace Garden tour will take about an hour and a half to complete.

Explore:  Things to do in Seoul 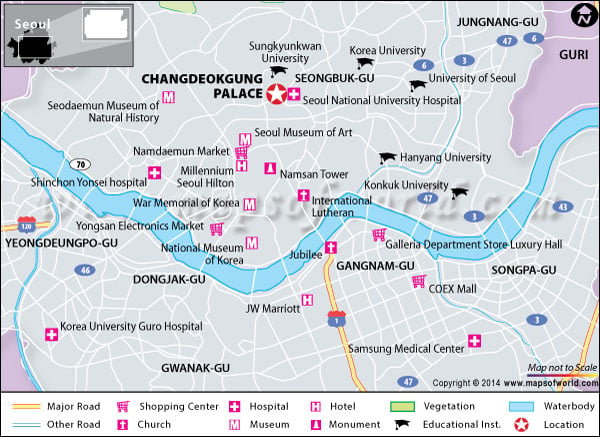 Where is Changdeokgung Palace ?

Changdeokgung Palace is located in Jongno-gu locality of northern Seoul.

You can reach the palace within one hour and twenty minutes by bus from the Incheon International Airport You can also take the subway to either the Anguk Station in Line 3 and get out from the 3rd Exit, or the Jongno 3-ga Station in Line 1, 3, and 5, and get out from the 6th Exit. The Palace complex is about 10 minutes down the Donhwamun-ro Street from Jongno 3-ga Station, and about 5 minutes from the Anguk Station.

Seoul experiences a subtropical climate, and has four distinct seasons.Spring, between March and May, is pleasant yet cold with cherry blossom trees in full bloom. Summer, till mid-July, is mostly hot and humid. Then comes the rain, when the number of visitors is lower. It is in September that the city gets some respite from the incessant pouring, and autumn brings in some beautiful sights in the natural surroundings of the Changdeokgung Palace complex. Winter is cold and harsh; between November and March.

Even though, Changdeokgung Palace can be visited anytime of the year, if you wish to see the spectacular foliage of the Secret Garden, visit during the autumn season, between September and November.

The visiting hours of the Changdeokgung Palace Complex differ according to the seasons and tour preference.

Tour of the Changdeokgung Palace building – During the winter season, between November and January, visiting hours are between 9:00 a.m. and 5:30 p.m. During the spring, summer and autumn months, which is from February to May and for September and October, respectively, the timings are extended for another half an hour, till 6:00 p.m. During the rainy season, you can tour the palace in a leisurely manner, till 6:30 p.m.