Blue House aka Cheong Wa Dae is the presidential residence of South Korea. Cheong Wa Dae, means ‘Pavillion of blue tiles.’ The roof of the main building is covered with blue granite tiles. It is a complex of buildings featuring a conflux of the Korean architectural style and modern amenities. Due to obvious reasons, the presidential residence is a highly secured area. A 40-minute tour of the two-storied Blue House entitles you to watch a five-minute film show and stroll around the impressive palace gardens and pools.

The presidential house comprises of the chief presidential office, conference rooms, reception rooms, and living quarters. Its extensions include Chunchugwan and Yeongbingwan, the Secretariat and Security Service Office.

The site of the palace served as a royal villa in the past. During the Goryeo Dynasty, it was used as a palace where the future queens were invited to stay for the marriage ceremonies of kings and crowning ceremonies of princes. The colonial era saw the destruction of several buildings and the establishment of the functionary mansion of the Japanese Governor-General of Korea in their place.

The liberation of Korea from the shackles of colonialism led to the formation of the Republic of Korea. Syngman Rhee became the first president of independent Korea and changed the name of the complex to “Gyeongmudae”. In December 1960, the then president – Yun Po-sun officially named the compound Cheong Wa Dae.

Tips for visiting the Blue House

Explore: Things to do in Seoul 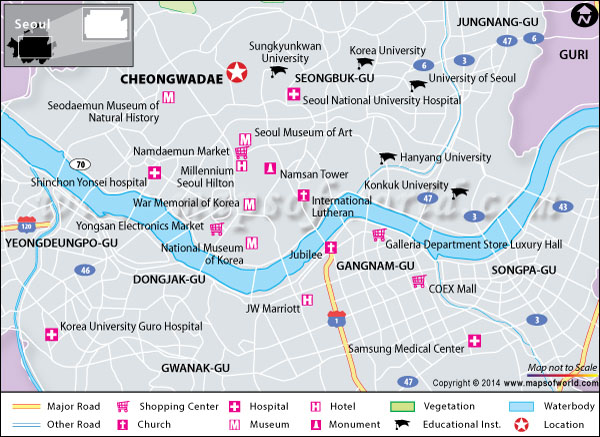 Location Map of Cheongwadae in Seoul

Where is Blue House ?

The Blue House is located in the Jongno-gu district of South Korea. You can reach the Cheong Wa Dae within a two-hour combined journey by subway and bus from the Incheon International Airport.
Address : Yeonpungmun, 1 Cheongwadae-ro, Jongno-gu, Seoul, South Korea

The best time to visit Korea is spring (April-May) and autumn (September-November).

Cheong Wa Dae tours are free of cost. You need to pre-book tours via the official website and get the tickets at the ticket office in Gyeongbokgung’s car park.

What are the coordinates of Cheong Wa Dae?