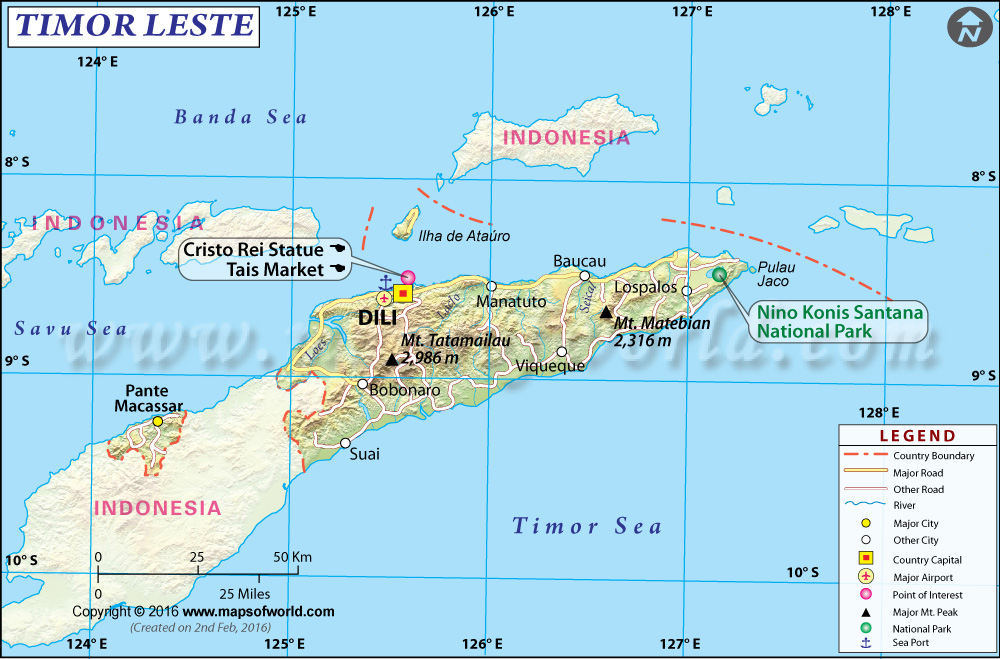 Explore this Timor-Leste map to learn everything you want to know about this country. Learn about Timor-Leste location on the world map, official symbol, flag, geography, climate, postal/area/zip codes, time zones, etc. Check out Timor-Leste history, significant states, provinces/districts, & cities, most popular travel destinations and attractions, the capital city’s location, facts and trivia, and many more.

East Timor is the only sovereign state in Asia while Portuguese being their local language. The word Timor came from timur, which means east in the Malay or Indonesian language that lead to the word Timor in Portuguese. This Roman Catholic country is unique in its characteristics where one has innumerable opportunities to choose from. Watch out the historical ruins, savannah grassland, prehistoric caves and traditional colonial towns while traveling to this scenic destination.

This Southeast Asian country is bordered with Timor Island, Atauro and Jaco islands from the eastern front, and Oecussi-Ambeno from the northwestern front along with the Pulau Atauro and Pulau Jaco Islands.

Known as the largest easternmost island of the Lesser Sunda Island, which is engulfed by the Ombai Strait and Wetar Strait from the northern side, the Timor Sea that seperates the island from Australia from the southern side and the Indonesian Province of east Nusa Tenggara from the western side. Mount Ramelau is popularly recognised as Mount Tatamailau which is supposedly the highest point of East Timor.

The climatic condition of East Timor is absolutely based on tropical monsoon. Either it is extremely dry here or it is extremely wet here. It generally witnesses dry and sultry weather during the month of July to November while western monsoon pouring down from December to March. The month of October to November experiences excessive humidity with irregular down pouring. F loods and landslides are common within the region. The place is even hit by earthquakes, tsunamis and tropical cyclones.

Flora And Fauna Of East Timor

The east Timorese are generally known as Maubere who can be seperated into diverse ethnic groups. These groups are : Malayo-Polynesian and Melanesian/Papuan group.

Within the Malayo-Polynesian group comes: Tetun (north coast), the Mambae (central mountain), the Tukudede ( Maubara area), the Galoli, the Kemak ( north-central) and the Baikeno ( near Pante Macassar).

Within the Melanesian/Papuan group the ethnic groups that thrive are: the Bunak ( central interor of Timur area), the Fataluku ( eastern side near Lospalos), the Makasae ( eastern side of Island).

The people of East Timor are friendly natured who believe in intercaste or interracial marriage system. The mesticos are popularly nestled here who are basically from the Timorese and Portuguese blend.

Visit the Nine New Painted Rock Art Sites where one can find trace of rock art in East Timor. A good example of Portuguese architectural can be seen in its building or totem houses which are called uma lulik or sacred houses in Tetum language. It is even called as lee teinu, which means houses with leags in Fataluku.

The culture of East Timor is widely influenced by Portuguese, Roman Catholic, Malay, Austronesian and Melanesian origin. This place is often referred to as a Crocodile Island where it is stated that large crocodile was ultimately changed into this island. Poetry is quite popular here.

The music of gamelan and fado are well imported from Portugal and Indonesia and the music still retains in this area.

The primitive native folk music that was performed by women while their respective husbands returned from the battalian grounds that became a traditional music of this place known as the likurai dance. Guitar is the most popular musical instrument used in this region.

The flag of East Timor was officially accepted in 2002 .The flag is designed in a rectangular format with two isosceles triangles overlapping each other. The top most traingle is black in color and is one third shorter in length to the below traingle which is yellow in color. A white five cornered star is placed in the middle of the topmost black traingle while the background of the flag being in red. The color yellow symbolises the colonial traces as seen in its past history whereas the black traingle denotes the overcome from this obscure deception. The red base displays the message of struggle for national liberation while the white star guides the path that lead to peace.

Recognized as one of the poorest nation, which led to the economic deterioration while being under the Portuguese and Indonesian administration.