The Samoa flag was officially adopted on January 1, 1962 when it gained independence.However, Samoa had adopted a same flag like the present one on 26 May, 1948. 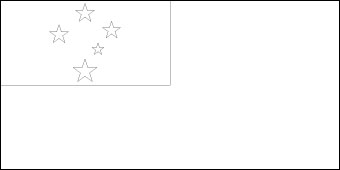 Download Picture of Samoa Flag Outline for kids to color

This flag only had four stars and the fifth was added on 24 February, 1949. The basic design of the flag of Samoa was created in 1948. The red color of the Samoan flag represents courage.

Where is Samoa in the World

Where is Samoa in the World