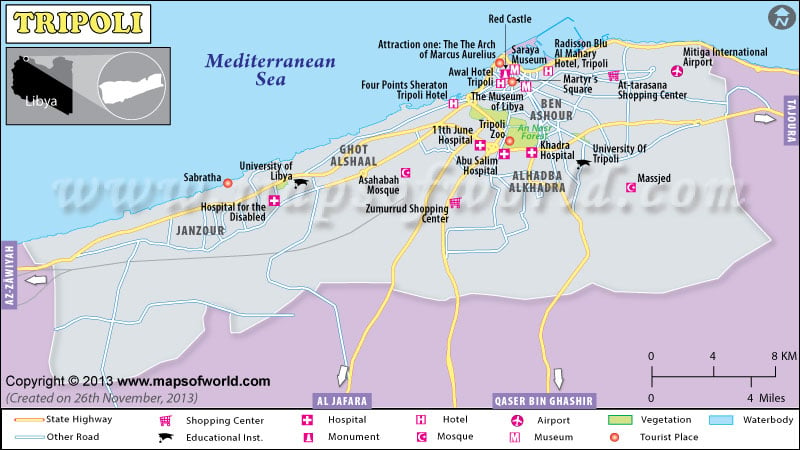 Tripoli is the capital of Libya located in North Africa. The city is located on the shores of the Mediterranean Sea and is a natural harbor. Though the city had passed through political turmoil in the recent past, the sanctions imposed by UN against Libya were lifted in 2004 and since then it is becoming a popular tourist destination. Tripoli covers an area of 400 sq km and is home to approximately 2.2 million.

The name Tripoli is derived from Tri Polis or three cities. The city was founded in the 7th century by the Phoenicians who called it Oea. The location was chosen because of the natural harbor and the easily defensible peninsula. In later times, the city passed to the Greeks, the Romans, the Egyptians and then became a part of the Ottoman Empire. In 1510, it was captured by Spain for a short time before being recaptured by the Ottomans. In 1927, it became an Italian colony and became the capital of independent Libya in 1951.

The city lies in the western tip of Libya, close to the border of Tunisia. It is a flat land and a naturally protected harbor on the coast of the Mediterranean. Vast sandy areas dotted with oases stretch out from Tripoli for about 300 kms. This region is known as Tripolitania. The city is served by the Great Manmade River which is a network of pipelines that carry fresh water to the city.

Tripoli has subtropical semi arid climate. Summers are long, hot and dry while winters are moist, cool and short. Rainfall can be very erratic while occasional snowfall has been recorded.

You can also travel to Tripoli by ferry or by road from Tunisia.

The best time to visit Tripoli is from December to May, winter season which is cool. Though there is occasional rainfall, the weather is better for travel than in summer when it is very hot.

The long and varied history of Tripoli has ensured that the city has acquired a truly cosmopolitan culture. The influence of Greeks, Romans, Ottomans, Italians and the Muslim tribes can be clearly seen in the architecture and the lifestyle of the city.

The Ghat Festival is a traditional event arranged in the south of Tripoli. Various handicraft and heritage exhibitions are showcased during this festival. The festival familiarizes you with traditional Tuareg culture and a concert is also arranged for the entertainment of the guests.

Eid Al adha is celebrated in November to commemorate Abraham’s sacrifice to God and his journey. Families get together and celebrate the day with feasts.

Points of interest (places to see) :

The long history has ensured that the city is packed full of interesting places to see. These are:

Whether you are on a lavish budget or on a moderate one, Tripoli ensures to offer you the best stay options ever. There are several excellent places to stay in Tripoli. Five star hotels include the Radisson Blu Al Mahary, JW Mariott, Rixos Al Nasr and Corinthia. Four star hotels include Safwa, Asshajara, Awal, Al wadan etc. The three star hotels are Ribas, Al safeer, Al Okhowa etc while Al Naher is a good two star hotel.